“You do better when you’re not trying so hard - Yeah, and you’re more interesting when you’re talking about different things.”

Feedback from family, friends, and helpful strangers after the “Carleton Laughs” debate on September 17, 2015 at the MacOldrum Library at Carleton University in Ottawa.   Interesting.

The words caused me to muse over my performance and the debate, organized by the Library as “a celebration of books and humour.”

Four speakers defended humorous book selections, Canada-Reads-style, before an audience tasked with electronically voting on a winner at the end.

To me, it sure felt like the event, which drew over a hundred advanced registrants and had to be moved into the Library foyer, succeeded. Despite the failure of the air conditioning system, the audience laughed more than it sweated and few, if any, bailed on the two-hour program. 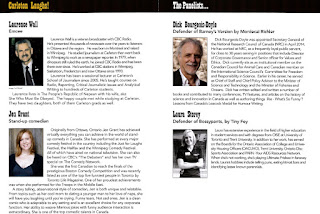 The University President, Dr.Roseann O’Reilly Runte, kicked things off with a funny story about Pierre Berton after noting how hard it is to be humorous in a way that touches everyone.

“Other than that incident, I can’t recall Pierre Berton being all that funny,” the President said. “Though he won the Leacock Medal for Humour.”

I resolved to send her some of Berton’s early newspaper columns.

Ottawa CBC personality Laurence Wall wrangled the group as MC, and Comedian Jen Grant set the entertainment bar high with an opening set, drawing upon material that has made her one of the top comics in Canada.

Before the event, friends advised me to avoid attempts at jokes, and, aside from noting the absence of political leaders and the intimidating credentials of my opponents, my opening defense of Mordecai Richler’s Barney’s Version followed a pretty straightforward course – similar to the review in my book on the Leacock Medalists.

But the other book defenders were more adventurous.

The second speaker, Laura Storey, Carleton’s Director of Housing and Student Life, had even been trying to rattle her opponents with off-line smack talk (“You're all going down!”) beforehand.  She did a great job of pitching Tina Fey’s Bossypants showing how it helps young women with self-esteem issues as well as quoting some of the best parts and the international sales stats.  Everywhere I looked I saw nodding heads whenever Laura cited the funniness of Bossypants.

The Chair of the English Department, Grant Williams, did not invoke arcane references and theory as I predicted, but demonstrated a certain kind of sophistication and wit in selling the immensely creative and edgy Great Apes by Will Self.

Grant peppered his spiel with ape-isms and threats to flash a reddened butt.

But the evening closed with the most votes flowing to Stumbling on Happiness, an information rich psychology text book told in a conversational and witty way by TED Talk star and Harvard prof Daniel Gilbert.

It was defended by the formidable presenter and a TEDx veteran Jim Davies, Director of the Science of Imagination Lab at Carleton.  Davies, as author of Riveted: The Science of Why Jokes Make Us Laugh, Movies Make Us Cry, and Religion Makes Us Feel One with the Universe, is a dynamic debater.

Davies acknowledged that Gilbert’s book might not have as many laughs as some of the other books, but he hit the audience with interesting facts, quotes that worked in isolation, and an impressive prop – his copy of Stumbling on Happiness decorated with dozens of sticky flags signaling good parts.

Barney and I came second in the voting.

Yet we might not have done so well if my opponents had not inspired me to loosen up, move off the script, and take a different tact in the round table portion of the event. 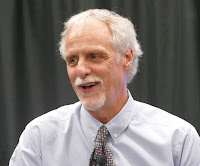 “I am an elderly man,” I said in launching into a frantic plea for support based on my diminishing opportunities for accolades as well as a purported desire to honour the deceased Mordecai and fictionally dead Barney.

This got a laugh from the audience (and a look from my wife suggesting that my sex life had come to an end).

With this encouragement, I launched into a faux appeal to insecurity and twisted nationalism by adding that “Barney is the only Canadian in this competition, and a vote against Barney is a vote against Canada (and, as Jim Davies noted, essentially support for terrorism).”

This last effort was a risk.  There was a strong possibility that my Ottawa audience had become desensitized to such appeals even when dripping with attempted irony.

But it worked, and I am sure that these arguments made the difference between a noble second place finish and something akin to the results for a Bloc candidate in Alberta.

I left the Library with a group of people keen to read all the books discussed and anxious to attend something like this again.

So if I am ever invited to debate humour books in the future,