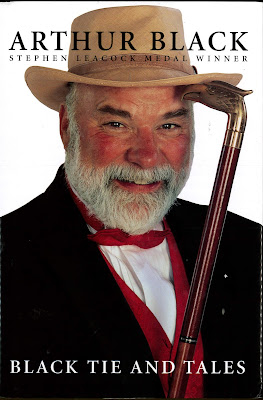 My mind will forever associate orgasms with humour, thanks to Black Tie and Tales, the 2000 Leacock Medal book by Arthur Black. In this, his second medal winner, Black quotes a number of authors and shares many observations on humour.
But the remark that “laughter is an orgasm triggered by the intercourse of reason and unreason" lingers. It haunts me, not only because of the image, but because Black’s entire book, directly or indirectly, argues for this concept.
In his earlier medal-winning book, Black, a confessed “Idea Thief,” showed how odd information can stimulate thinking and ranting. Black Tie collects and presents more of the same, but it takes readers a step further with musings on how interactions between the unreasonable and the rational can make us laugh.
These interactions also, according to Black and those he quotes, bring us closer to the truth.
In the 1990s, when Black generated many of the essays in this book, literary critics were still picking at the merits of creative non-fiction--a mix of facts and fancy--and a lot of the debris fell on Leacock Medallist Farley Mowat. Arthur Black, a fan of the format, defends Mowat with the environmentalist and author’s own words: “Truth I have no trouble with. It’s the facts I get mixed up." Black amplifies the point with Saskatchewan writer Sharon Butala’s explanation of how all good “nonfiction is fiction” anyway. Butala suggests that in “the backward search through happenstance, trivia, the flotsam and jetsam of life, to search out a pattern, themes, a meaning . . . is by its nature an imposition of order onto what was chaotic . . . what is [really] true are thoughts, dreams, visions."

The idea of mapping thought onto the flotsam of life appeals to Arthur Black. Even though he recognizes the power that trivia tidbits have to engage (“Any storyteller knows that the first thing you’ve got to get from an audience is attention”), his best rants merge trivia with thoughts to grasp at a truth.
So if “truth lies at the root of much humour" and humour arises from the incongruities of life, truths that make us laugh may be those revealed by thoughts in conflict with fact. It seems to me that such incongruity can only be achieved in one of two ways: (1) with humorous thought spread upon dull facts; or (2) with sound thinking in the face of unreasonable fact. Black’s curmudgeon persona prefers the latter--the one that rails at reality.
To this end, he seeks stimulus from everywhere he can, using a brain that operates on “the same principle as the lint mitt. It picks up fluff, dust, stray hairs like a magnet . . . and lets the big stuff slide right on by.”
Arthur Black uses the fluff for orientation and a hint at what is coming. He links his own experience to broad issues and ties trivia to his feelings. The death of his aunt leads into an essay on gift-giving. The story of a biologist in the Brazilian rain forest revives memories of Black’s father. His experience wrestling with a tangle of battery cables sends him into a study of neuro-functioning.
Arthur Black would chuckle at all this seriousness around the subject of humour. It is in this book that he cautions, “Trying to define exactly what is funny is like trying to braid a rope out of smoke.” Still, I am convinced by the suggestion that the intercourse between the odd and the thoughtful can reveal a truth and make us laugh.
Not all truths fit this frame, though. Too bad. It would be a different world if truth-telling always induced an orgasm.
Writing Exercise
Identify a belief that you hold dearly and write a convincing essay to argue for your position--but fill the essay with many obvious factual errors.
Newer Post Older Post Home