1999 Home from the Vinyl Cafe by Stuart McLean 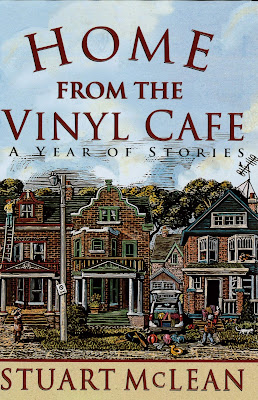 McLean’s book features Dave and Morley, a devoted couple who suffer mild misunderstandings and commonplace experience. They meet at a skating rink, correspond, get married, settle down, have kids, go on road trips, rent a cottage, send the kids to school, organize birthday parties, worry about teenage dating, and, at the beginning and the end, celebrate Christmas.

By the murder-and-porn standard, the stories can seem bland and even boring. Yet humdrum Dave and Morley have comforted listeners to McLean’s radio program for over twenty-five years and have made the Vinyl Cafe books, like the 1999 Leacock Medal winner, bestsellers.
McLean’s radio delivery adds a lot, and although his voice floats faintly in the back of your head, a book will disappoint CBC fans who like McLean in audio form. But for the humour student in me, the text in isolation made it easier to consider the patterns and analyze the appeal.
After putting the book down, I realized that many Canadian readers could probably recite the story line, characters, and incidents of each episode in greater detail than they might recall burn-into-your-brain dramas designed to titillate and traumatize.

One reason for this lies in the Canadian flavour of what writing scholars call “profluence,” the cause-and-effect sequence of events that readers willingly buy into. For many, the simple Vinyl Cafe tales have a familiarity that gives the flow a logical feel and that slips easily into the average Canadian mind.
Because Dave, the husband and father, usually screws up in the Vinyl Cafe, I tremble, thinking that McLean’s stories could be popular because there are so many men out there like Dave with partners who see themselves as Morley. But maybe.
In each story, McLean describes intentions and decisions that make it easy to cast thoughts ahead in anticipation while, at the same time, turning the pages in anxiety. Canadians feel anxious because they care about what is going to happen next. They care because Dave and Morley are so darn nice.
Dave wants to keep his daughter safe and to save time, so he locks his keys and kid in the car. He sticks his tongue to the frosty TV antenna when boyhood curiosities blend with adult defiance. Dave feigns illness to spend an amorous day with Morley after fifteen years of marriage, and this decision leads to a visit from his concerned mother-in-law. Perhaps people laugh because they can laugh at themselves, and if this quality defines Canadians, it’s not such a bad thing.

Still, even with this cause-and-effect flow and ability to pull readers along, more drama and action would enliven these stories, and maybe McLean should conjure up at least a few that mix Dave and Morley with alcoholic hallucinations, murder, and bizarre porn.
While I reviewed these questions and wondered how far to pursue the issue, an admitted Vinyl Cafe listener who identifies with one of the characters and who happens to share my bed and bookcase, provided me with guidance. I asked whether one could explain the phenomenon by describing Vinyl Cafe fans like her as typical, “boring” Canadians.
“Well, I suppose,” she said, adding: “So, what then do you call someone who spends his time analyzing and deconstructing the Vinyl Cafe?”
Writing Exercise
Tell a story about doing your laundry in a way that makes readers tense.
Newer Post Older Post Home