2004 Village of the Small Houses by Ian Ferguson

Lesson 57
How to create an effect by not saying things 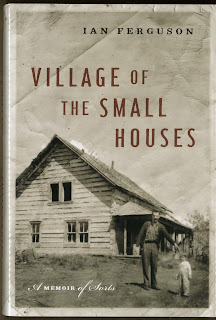 My parents stayed in the same home for almost four decades, cradled me in a sense of security, and always furnished the essentials. Their behaviour really limited my opportunity to build character and an interesting life story. They affected my life by not doing things.

Ian Ferguson never had that problem.

His parents dragged him through bone-chilling experiences while he was still in the womb. Lucky Ian had the kind of childhood that forms personality and aligns well with a creative life and he exploited this advantage to win the 2004 Leacock Medal with Village of the Small Houses.

Ferguson’s “memoir of sorts” begins in the late 1950s when his parents flee Edmonton with the unborn Ian. The group settles in the bitter cold and minimal plumbing of Fort Vermilion, and Ian’s father works as a teacher on the local Cree reserve until his lack of credentials comes to the attention of the school superintendent. Dismissed from his job, Hank Ferguson takes the expanding family, which eventually numbers seven, eight, or more, depending on how and whom you count, on another road trip, eventually settling everyone in Regina, where Hank wrestles with the bottle and disconnects.

Ian’s parents end their marriage there, giving their children motive to make jokes about Regina decades later. Their mother, a nurse, takes her children back up to the Fort, where they have a house, and she finds work. The kids rarely see their father again.

Already, I’m sure you’re thinking this is a sad story.

Proximity to the native reserve, Ian’s health problems, and the small house-like tombstones in the Fort’s graveyard add to the potential for tales of insecurity and woe.

But Ian Ferguson rejects this route and never comes close to assuming the guise of victim.

Early in Small Houses, for example, Ferguson mentions his mother’s exposure to LSD treatments and thalidomide, but he paints her, not the unborn son, as the wounded one. At the end of the book, Ferguson touches on his own battle with alcohol, but distances it from anything that might point to paternal culpability. I admire this, but I was a little surprised, given the Leacock award, that Ferguson also declined the easy option of spinning the recollections as wildly comic, even though he had experience in comedy. 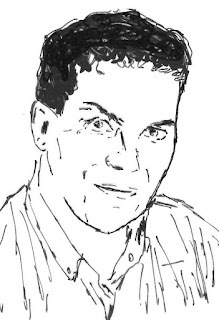 A playwright, actor, director, and producer, Ferguson had a well-honed imagination and a reputation as a joker. He ran a comedy club in Edmonton for a while and made money with How to be a Canadian, a book of jokes and rants on history, culture, and Regina, which he co-authored with his Leacock Medallist brother, Will. Those who knew older brother Ian’s career might have understood had he chosen the mode of blatant comedy for his memoirs.

Instead, Ferguson tells of his experience in simple terms and stresses the family and friendships more than the adversity.

You sense that he wrote the book as a tribute to his mother, his siblings, and even his father, and that he cared more about this message than book sales or reviews. The disadvantaged native people who walk in and out of Ferguson’s sort-of-remembered childhood also appear as uplifting and cheery figures. The native community formally adopts Ian to legitimize his treatment through aboriginal medicine, and the personalities of Bud, David, and Lloyd brighten his life despite their issues and their destinies.

But again, in this book the most intriguing parts come between the lines in what Ian Ferguson does not do. We can always find something to mock or complain about--even seeing a downside to a stable and secure “waste of time” childhood like mine. But Ferguson tells of long winters, outdoor bathrooms, illness, his dad’s departure, and Christmas with no gifts without any hint that he considered his childhood as anything but a joy. In fact, in the last lines of his book, the guy I called “Lucky Ian” with irony says, “I was born lucky.”

Against Leacock’s formula for humour, you can easily see the influence of a kindly contemplation in Ferguson’s account. The incongruity requires a longer stare. It sits in that simple retelling combined with the absence of the obvious clichés that normally surround rugged childhood stories. It makes you smile, but you aren’t completely sure why.

When the book came out, a few critics suggested that Ferguson fell short in the “artistic expression thereof” side of the humour-writing equation. But they usually presumed one of those clichés that Ferguson did not use and they missed the things unsaid.
Writing Exercise
Write a first-person account of your own birth.
Newer Post Older Post Home