2005 Beauty Tips from Moose Jaw by Will Ferguson 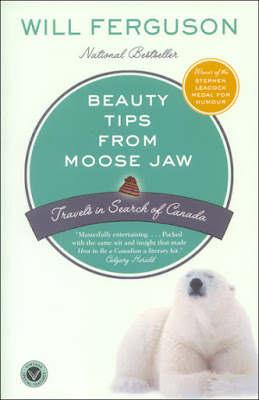 Looking across the surface of bluish-grey and swirling green, I feel the breeze brush my face, listen to the flapping sounds, and watch the tumbling leaves. I’m flipping through a book and wondering if I have it in me to become a travel writer.
The bluish-grey-green paperback contains Beauty Tips from Moose Jaw, the book that in 2005 brought Will Ferguson his second Leacock Medal. It encouraged thousands to learn more about Canada and prodded me to learn more about grammar.
I like to see new places, meet different people, and research both, but travel writing as an enterprise has always intimidated me. I’ve avoided it like time-share seminars and resorts under quarantine because I have a problem with verbs.

When I read travel articles, I can never figure out how or why the writer has chosen a specific tense. Some stories are told as if events are unfolding as the traveller transcribes them. Other travel articles tell similar stories completely in the past tense, but sometimes with the air of reportage. It seems writers can set their own rules, which I wouldn’t mind except that I’m easily confused. The disorder usually reaches cruise-ship proportions when the writer tries to be both funny and factual.

Will Ferguson, however, has it mastered. In Beauty Tips, he uses verbs to choreograph his travels, humour, and first-person narratives in a way that cues his readers, avoids the confusion, and makes a better book. 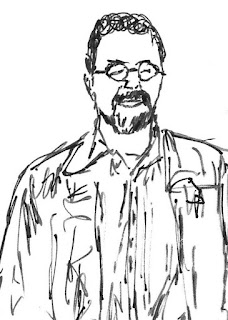 Beauty Tips, subtitled Travels in Search of Canada, follows Ferguson through a selection of tourist sites across the country. The adventures fall on the mild side of travel, not too far from hot showers, warm beds, and grilled cheese sandwiches, but Ferguson makes each place interesting with his personal accounts, information on geography, the local lore, and, mostly, the history, which he shares with zeal. He also makes you chuckle.

Ferguson tries to tie all this together by picturing Canada as an assortment of “outposts,” which may seem like weak analysis but serves the purpose here because his style and his skill with those verbs hold the stories together better than any umbrella image.

He begins each chapter with a humorous experience, like the poetry night that starts his overview of Victoria, B.C., using the present tense, then slips into the past tense when sharing the facts of history. A past-tense description of the Underground Railroad and the Henson settlement in Southwestern Ontario sits within a comic road trip with his brother Ian. In the title chapter set in a Moose Jaw spa, Ferguson tells of his first-ever massage in funny terms and the present tense,
but he turns serious and invokes the past tense when railing about distortions of local history. Pooping-and-peeing Alex provides the ambiance for the real-time drive to the Republic of Madawaska and the venue of an almost-war in northern New Brunswick. Similar dual-tense stories tell of Ferguson’s search for the polar bears near Churchill, his stop in the Saguenay region of Quebec, and his tour of the Viking settlement at L’Anse aux Meadows in Newfoundland.

A single-tense exception comes in his visit to St. John’s, which is dominated by present-day human interaction and less history than usual. And his recollection of his childhood in Fort Vermilion, which seems to be dropped into the book as an afterthought, has its anomalous feeling amplified by the almost exclusive use of the past tense in its telling.

But even these examples do not break with the pattern picked by Ferguson to tell his stories: When he really wants us to laugh, he talks in the present; when he wants us to learn, he sticks with the past. This may be the lesson for those who aspire to write humorous travel stories. Whatever you decide to do with your verbs, be consistent.

My effort to reduce Ferguson and his book to verb tense technique threatens to bleed all of the beauty and humour out of Beauty Tips. But the pencilled notes on the flapping leaves of my blue-grey book suggest I’m not imagining it.

If I was, Ferguson might forgive me anyway. He thinks that Canada exists as a function of our imaginings and “is a sum of its stories”--stories that are easier to share when you know what to do with your verbs.
Writing Exercise
Write a travel essay about a visit to Vatican City with your brother-in-law, a professional magician.