2003 With Axe and Flask: The History of Persephone Township from Pre-Cambrian Times to the Present by Dan Needles

Lesson 56
How to see the humour in our history 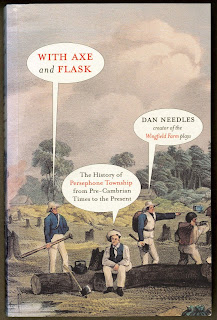 My Uncle Ed worked as the fire chief in a Northern Ontario town that burned to the ground four times. His fire crew resigned en masse when Ed took the pool table away, and Ed’s wife died in a house fire while he was out promoting fire safety. He and I share ancestors who believed they were descended from a heroic Celtic king.

Lots of writers could tell this story with an ironic twist. But when I wrote about the town and Ed’s life a few years ago, I focused solemnly on the angles of persistence and dedication to encourage community pride.

I don’t think I did justice to Ed’s memory, the story, or readers by running away from the perversely funny perspective. Intent on doing better in the future, I hoped to learn how to tease the humour out of history by reading the 2003 Leacock Medal winner, With Axe and Flask: The History of Persephone Township from Pre-Cambrian Times to the Present by Dan Needles. Opening up the book, I braced myself because I knew the exercise would make me itch. With Axe and Flask parodies local histories like mine on Uncle Ed.

Dan Needles has been working at funny pretty much since Precambrian times and he has small-town storytelling credentials as well. After university and other work, Needles took a job as editor of the weekly paper in the fiddle-contest community of Shelburne, Ontario. The barrage of school boards, soccer tournaments, and sewers often leads small-town editors to seek diversions and ask questions like, “Why does this place exist?” and, “Who decided those people deserve respect?”

Such thoughts make us laugh at ourselves, and, if we can, we make others laugh, too. With this goal and his power at the paper, Needles started a regular feature in the early 1980s: letters to the editor from the fictitious Walt Wingfield. Walt, a stockbroker turned farmer, amused readers with his naiveté and outsider’s perspective.

After a few years, the popularity of the invented Walt took him to the stage in plays that continue to run thirty years later. The plays have morphed into television productions and DVDs, making Needles a two-pronged oddity as a Canadian writer who earns money at it and, indirectly, as a farmer who actually makes a living from agriculture-related activity.

All this suggests I could learn a bit from Needles about how to mix history and humour, even though With Axe and Flask stands apart from his portfolio as a story not by and about Walt but about the township around his farm.

In this book, the narrator, another man from the city, finds time on his hands and turns to the study of a 1930s manuscript written by his late grandfather. The old book also carried the title With Axe and Flask: The History of Persephone Township from Pre-Cambrian Times to the Present. This means Dan Needles wrote a book about writing a book about another book and coupled it with the narrator’s personal interpretations, experiences, and bits of stumbled-upon trivia.

It felt kind of familiar.

With two imagined authors and one real one at work, digression threatens, and Needles himself suggests that the book falters at times. But it generally holds tight to a retracing of the township history that, as expected, made me smile and scratch at the same time. 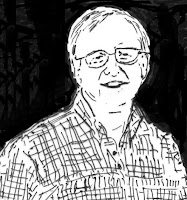 In looking for humour in history, you can usually rely on a politician or two to grab more than their due when things go well, and, when things go badly, a scoundrel or two can usually be found hiding in the bushes. The challenge comes when nothing much happens. Needles tackles it with a Sarah Binks-style effusiveness.

The technique underpins most of the book, but it’s really hard to miss it when the narrator tells us that his grandfather devoted a chapter of the source manuscript to “The Economic Inactivity of Persephone, 1870 to 1900.” In another chapter, “The Modern Era,” the narrator’s grandfather paints a “picture of a community that has dwindled into calm resignation at its fate as a quiet backwater in the Ontario countryside.” With this as substance, words like “greatness” have a particularly ironic impact.

History with hyperbole will resonate with anyone who has studied small-town Canada. But the sections that might make Canadians twist and smile most deal with more recent developments such as “the invention of the pickup truck . . . [which] relieved a great burden on the local ecosystem . . . [as it] gave the men much greater range for hunting and a greater carrying capacity for weapons and beer . . . [as well as] a measure of independence and privacy to young couples . . . [that] . . . considerably reduced the need to abduct women by force.”

Biting stuff, but I don’t know if Needles can help me much until I’m ready to cross the line and satirize rather than celebrate.

I might be looking for too much by thinking I could do both at the same time.

Even in fiction, one-liners and sarcasm can test a community’s sense of humour. Stephen Leacock enjoyed a prickly reception in Orillia after Sunshine Sketches of a Little Town first appeared, and the imaginary book within a book in With Axe and Flask was remembered as an “unfortunate foray . . . into the realm of literature” and a deviation from an “otherwise unblemished life.”

“It was a different time,” the narrator is told. “In those days, people just didn’t think it was seemly to discuss in public where a person’s family came from, how they made their money, or, worse, how they lost it. It made everybody squirm.”

“But how do they feel now?”

Assuming they and their Canadian counterparts still do, the dependable options for humorous history would include the mode of parody chosen by Needles. The satire can still smart when real events and personalities are sprinkled throughout. They destabilize any reader who wants to think of the whole book as a yarn. Still, I might have to keep looking to find a model of “true” history with humour. Perhaps it lies in writing that includes humour but ghettoizes it, keeping it separate from the factual.

Regardless, any foray into humorous history, when personal and local, carries risks beyond how others might react. As the narrator of With Axe and Flask notes: “When you examine your own history properly, it does offer a rich source of speculation about why you have turned out so badly.” Those remarks have a particular sting for someone like me who is descended from a heroic Celtic king.

Writing Exercise
Write a short account of the first meeting of the Fathers of Confederation, noting that there was an open bar at the event.
Newer Post Older Post Home