Lesson 62
How to write the fish-out-of-water story 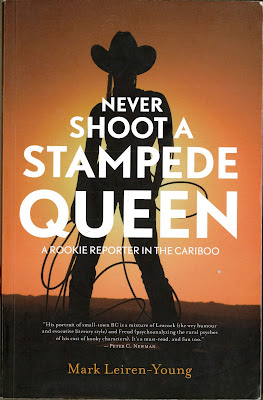 You breathe heavily all the time, flail around in angst, and hope someone will intervene to put you out of your misery. A fish does that when pulled out of water; Mark Leiren–Young behaved much that way while living in Williams Lake, British Columbia; and I usually do that when I read a journalist’s memoirs.

Leiren–Young’s account of his time in the Cariboo in the mid-1980s, as told in the 2009 Leacock Medal winner, Never Shoot a Stampede Queen, amounts to what reviewers called the standard “fish-out-of-water” story. Playwrights and movie scriptwriters like the form for its comic get-your-hero-in-trouble potential. This means they have pretty well worn it out, and Leiren–Young’s book doesn’t break from the routine. But I liked his stories despite the formula and their journalist-memoir aura because I believed them, learned a bit, and laughed.

His publisher calls his book the tale of “a city boy” in “a cowboy town,” and the title promotes the tenderfoot in the Cariboo image. But when you read it, the floundering fish you see lying on the page has the body and soul of a playwright trying to survive in a weekly newspaper job. He could have been anywhere--even in the big city. The cowboys and Stampede setting have less to do with his stories than his personality and perspective.

I say this with confidence because I lived in Williams Lake around the same time as Leiren–Young, knew all of the places he cited, and floundered around as a reporter in small towns myself.

Please accept my word on that, because an elaboration would flip me into old-journalist boasting, the kind that makes me wheeze.

Leiren–Young’s stories don’t do that, and I think this is partly because they mix the fish-out-of-water structure with the newsroom memoirs. Mixing formats always blows air on a story, but first you have to master each one individually. 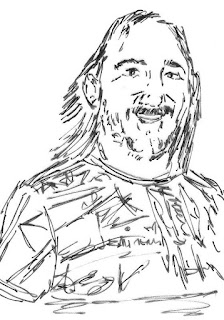 Stampede Queen has all the fishy elements for anyone wanting to study them. First, you have to set up the protagonist and his point of view, and Leiren–Young does that by telling us how he recognized the theatre as his calling at UBC and later at the University of Victoria.

Next, the book pulls the fish out of the water. Leiren–Young’s post-graduation appointment as artistic director for a children’s theatre falls through, and the job offer from the Williams Lake Tribune presents itself as the only alternative to six dollars per hour on the line in an Ontario cookie factory.

Now, with empathy for the fish and its waterless situation established, the third phase is introduced: the flailing.

Abuse and assaults, car accidents and robberies, bikers and bears, municipal politics and Stampede Queen photo shoots thrash him around for about a year. Leiren–Young’s accounts have an authentic ring for anyone who has had a police scanner next to his pillow or covered dog shows in the morning and murders at night, and they might still be a good primer for journalism students. But they make other people laugh, too, because of Leiren–Young’s imagination and outsider’s perspective. He looked back on the experience as an anomaly in his career and not a step on the path to glory. As usual, I’m awed by stories that make something out of nothing: like the explosion that doesn’t happen but had so much drama that Leiren–Young used it to open his book.

In another illustration of how strangely personal humour can be, I also laughed at the problems caused by his hard-to-spell, hyphenated, half-Anglo/half-not name. A Vancouver paper makes his cheque out to “Neil Leisen–Young,” and irate Stampede Queen contestants complain about the “horrible [photographer] Mark Leiner–Young.”

His stories feel bright because they were written not like faded and fabricated memoirs, but while still fresh. Mark Leiren-Young fell ill with mononucleosis shortly after leaving the Cariboo. Housebound, he put the stories to paper in 1988 and didn’t change them much, even though they went unpublished for over twenty years. As a result, the stories remained vivid, but with a touch of perspective and bemusement.

The final phase in the standard fish story flows from hoping someone or something will intervene to either pull the fish back into its natural habitat or help it grow legs and live in the new environment. In fact, the typical Hollywood exercise ends with the out-of-water hero learning to adapt to his new surroundings, usually well enough to mate and spawn.

Leiren–Young left the Cariboo and went on to a career as a screenwriter, playwright, performer, and comedian. Yet he still sometimes describes himself as a “freelance journalist” and did manage to mouth, “maybe living in a small town’s not so bad after all” before swimming away from Williams Lake. The sum makes you want to jump out of the water, take a chance, and maybe even read more journalists’ memoirs.
Writing Exercise

Describe your personality and passions. Then think of the worst employment circumstance for a person like you and write a story with you in it, explaining how you got there, what happens while you are on the job, and how you leave.
Newer Post Older Post Home