2010 Beyond Belfast by Will Ferguson 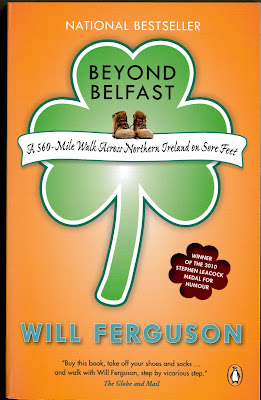 In the spring of 2013, in an old stone church overlooking the Rideau Canal, I went up to a table by the altar and converted. There, in the sanctuary of Southminster United, I broke my vow to buy only used copies of the Leacock Medal books.

I paid full price for Beyond Belfast: A 560-Mile Walk across Northern Ireland on Sore Feet, the 2010 winner by Will Ferguson. He came to the church for the Ottawa Writers Festival, and I had a chance to get a book signed if I bought it on-site.
After a brief exchange, he wrote out his signature, a salutation, and the note, “Funny is as Funny does.” I read a lot into that comment, probably more than warranted, because I associate it with something he had told the audience that night. Earlier in the evening, Ferguson had said he doesn’t like stories that feature introspective personalities and that he always tries to reveal character through dialogue and action.
“I believe deeply that our character is decided by the choices we make,” he said in reference to his Giller Prize-winning novel, 419. “I think character in fiction and in life is defined by the actions that characters do and not who they think they are or the slights and the grudges and regrets that they dwell on.”
The comments echo standard writing text advice to tell stories through vivid experience, action, and deeds. If you wanted to extend that to writing humour, you might express it as “funny is as funny does.”
When I got home that night, I looked down at the scribble in the front of my new book and broke another pledge. I started reading this 2010 winner out of chronological Leacock Medal order, keen to find words that would illustrate Ferguson’s point and to make that the theme of my review of his book. I saw a few examples, but not enough.
Beyond Belfast follows Ferguson on a solo journey along the Ulster Way, the long, looping footpath around Northern Ireland. The book documents action: the action of walking across streams, up mountains, along cliffs, and over dung-filled pastures; and it presents dialogue: in dank pubs, dank B&Bs, and dank city streets. The book makes the slipping and sipping experiences pretty funny, but Beyond Belfast also contains more than just a little dwelling and thinking, too.
Fewer people had completed the sore-feet feat than had climbed Everest at the time Ferguson set out on it just over a decade ago, but he was not motivated entirely by the physical challenge. He wanted to understand his ancestry, which he saw not in the Fergusons, but in the Ulster line leading to the single mother who raised him in Fort Vermilion. I don’t think that 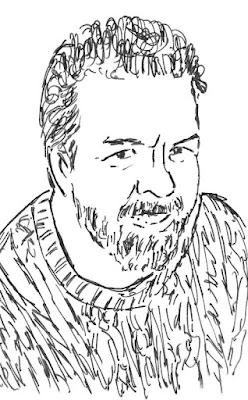 Ferguson could suggest that this book kept entirely clear of introspective thoughts and feelings.


He mused not only about his orphaned grandfather but also about the history, politics, and religion of Northern Ireland. In the front end, he frames his journey with the basics of William of Orange, the 1916 Easter Uprising, and the 1969 events that sparked the more recent terror.

Although Ulster issues defy understanding, Ferguson wades in, perhaps feeling he had earned a connection with his blisters and his research on family history. As he flops his dung-covered hiking boots around Northern Ireland, he passes all the points of sadness: Armagh, Derry, Enniskillen, and, of course, the starting and ending point, Belfast.
I don’t know what kind of person could avoid introspection on that r
oute and I don’t blame Ferguson for failing to provide me with an easy, exemplary book of telling by showing.
Still, I felt a little dejected. As I pondered this hurdle, I thought about my decision to buy a new book just because of the convenience and wondered if I was giving up. Having read the 2010 Leacock Medal winner out of sequence, I knew that when I put Belfast down, I would be slipping back to 1992 and would be facing twenty more books.
Maybe in part to put off the backward slide, I started flipping through Beyond Belfast again and I took greater notice this time of the maps and charts that introduce each section, thought about the plans and preparations and the plodding along in the pastures, and remembered something else Ferguson had said in the Ottawa church.
He told the pews that he puts more time into planning and working on the plot for his books than writing them. He spent over a year and a half on the outline for 419.
“I should have brought the actual outline--it’s about eighty pages,” he said. “It’s a scene-by-scene breakdown. The trick is to outline and outline and outline . . . before you start.”
Ferguson said that he thinks a detailed plot ensures that a writer doesn’t follow ideas into a corner or get swept up into the fog of endless possibilities. He told the audience that this applies equally to fiction and travel writing.

“My sister is a sculptor; she prefers to work in marble, but it is quite expensive and so she also works in clay,” he said in what seemed like a non sequitur. “She says with clay, you build something up . . . with marble, you cut something down.”
Ferguson said travel writing like Beyond Belfast is like sculpting in marble because you typically have this huge block of experience, history, and destination information. You have to make choices and cut away.
“But with fiction, it’s like writing in clay . . . you are building things up from something," Ferguson said, adding that you can be overwhelmed in either of them--in one by information, and in the other by ideas. Then he repeated that a detailed plot can be the answer.
“With a good plot outline, you can skip ahead and work on a scene out of sequence and then come back to your plan,” he said. “Don’t worry about themes--themes come out of the story” if you stick to the outline. Maybe I jumped ahead in reading Belfast, but I did it within an outline: my Leacock Medal book reading plan. Now, I just need to do the same kind of planning with my writing.
So, I plodded along, thinking back on Ferguson’s varied advice, his 560-mile walk, and my book. I visualized his sister’s work with chunks of marble, the towers and castles of Ulster, the rock of the Mourne Mountains, the stone walls of the Ottawa church, and then the craft of writing. A unifying theme emerged: “This stuff is hard.”
Writing Exercise
In 560 words, plot a travel adventure story based on the circumnavigation of Prince Edward Island in a canoe.