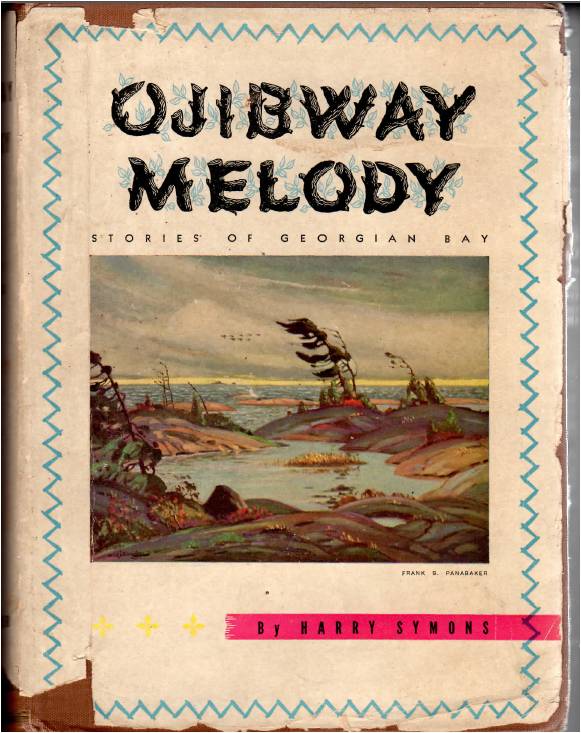 The two-story, nineteenth-century manor sits in a leafy, established part of Peterborough. I’m glad that I didn’t know about the house before I entered it. Learning within its walls convinced me that I was on to something.

“He used to live here; in fact, I bought the house from him,” my host said in reference to a famous former inhabitant.

The cordial speaker, Professor Tom Symons, shared this morsel and some funny stories as we discussed my interest in the Leacock Medal books. Symons and his wife, Christine, had invited me to their home for lemon cake and a cup of tea. My wife and I made the trip from Ottawa in early 2013 not to see the house, not to hear about its past, and not to eat. Michèle came along because she likes road trips, and I came to learn more about Tom’s father, Harry Lutz Symons, the author of Ojibway Melody: Stories of Georgian Bay, the 1947 Leacock Medal winning book. Little has been published about Harry, and I wanted access to the family archives at Trent University.

All I knew for sure about Harry Symons came from reading the book which described his love for the family cottage near Pointe-au-Baril on Georgian Bay, a place that Harry regarded as a sanctuary. With Ojibway Melody, he tried to share it, guiding us around the islands, pointing out the good fishing spots, and describing the locals. The book can leave you with the feel of a warm handshake, a pat on the back, and a canoe ride on sparkling waters.
Given Stephen Leacock’s association with Ontario cottage country, the 1947 medal judges probably felt that this book made a fitting first winner of the award established in Leacock’s honour. Yet it struck me, initially, as a puzzle.

The writing seems like a stream of consciousness, nothing like the one-liners, jokes, or comic stories that we consume as humour today. Ojibway Melody pours out a medley: hunting trips; the legend of Turtle Rock; the whisky barrel that gave Pointe-au-Baril its name; the crow “Black Lucy”; the rookery of lake birds; and Regatta Day, “with all its fun, and laughter, and excitement, and crowds, and ice cream, and pop, and noise.”

At times, the book reads like a transcription of musings over events just as they unfolded, like this unedited bit of narration: “. . . for a while. But hold on a moment. Perhaps that was . . .  it might just possibly have been . . . well YOU know . . .”

Harry Symons shifts the verb tense and the perspective of the narrator regularly. The only consistency comes from his affection for “the local focal:” boats and fishing. Canoes, inboards, outboards, and row boats. Pike, lunge and bass. Early in the book, you might think Symons wrote it to celebrate the Ojibway Hotel. But then he talks of hotels with caution, saying he did not lust for places where “ties and collars” were the norm. Harry says that if such a lifestyle ever takes over Georgian Bay, the area will have “lost its savour and . . . the ageless rocks will arise in all their dignity and crumble into dust.”

When I read this passage, I started to understand. It sounded like something I had heard others say when I was young and was the kind of thing my own father would have thought. I began to regard Harry Symons as my own dad counselling me raconteur-style to slow down and lighten up a bit.

Like my dad, Harry praised simple pleasures: “First we swing our feet out of bed, and dangle them over the side, and keep our toes off the floor just in case it is cold. Then we yawn a good deal and grumble, and flex our arms, and wish we were back in bed . . . And quite often we just do give up and crawl back in again . . .”

This kind of talk humoured my father’s generation because it was struggling with the strains of careers, family, and a changing society. In the 1940s, Canadians also wanted to think about things other than war. Ojibway Melody, though written in 1944 and 1945, met that need. It only mentions the World War II context in a vague reference to “the labour shortage in wartime.” The incongruity of this book thus exists, not in the text alone, but between its dark background and cheery content.

Harry Symons had special reason to block out the violence and seek refuge in the boats and fishing around Georgian Bay.

Born in Toronto in 1893, Harry loved physical exertion and the outdoors. He even quarterbacked for the Toronto Argonauts, served as captain of a varsity football team, and sailed competitively. He spent summers on a survey crew, camping and hiking through the wilderness around Georgian Bay. The beauty of the forests and the waters fixed in his head and would turn out to be important to his psyche and survival.

When World War I broke out in 1914, Harry Symons left school and joined the army to serve on the front lines in Europe, where his mind clenched onto images of the islands around the Bay. In August 1916, he transferred to the Royal Flying Corps and the cockpit of a Sopwith Camel. Harry survived, scoring enough kills to place him in the “Ace” category. Yet he never talked much about the war, and after his death in 1961, aviation historians described his exploits as “unknown to all but the most diligent researchers."

The future Leacock medallist did not consider the wartime heroics nearly as important as his post-plane-crash stay in an English hospital. That’s where he met a nurse named Dorothy. After he returned to Canada with Dorothy at his side, he bought the Georgian Bay cottage “Yoctangee,” put the war behind him, pursued a career in real estate and insurance, and started a family that would eventually include Tom and seven other children.

Tom Symons had talked to me on the phone and had sent me some records as well as having invited me to his Peterborough home, which I learned, only after taking off my boots and sitting down, carries formal designation as Marchbanks House, a historic site and former home of novelist Robertson Davies. Davies wrote his Leacock Medal-winning novel in this house. W.O. Mitchell and others also honoured by the Leacock prize regularly visited the place and sat in the chair that held my butt that early 2013 afternoon. Tom, who also showed me the artist’s cast for the first Leacock Medal, told me all this to encourage me in my project. He wanted, in particular, to share the story of his dad’s book Ojibway Melody and the impact it has had on the academic study of Canada.

“The book ... means a great deal to me. I often think of it because it gives me answers when I am considering things--it helps as a compass when I have difficult chores from time to time,” said Tom Symons. “First of all, it reads the way my father talked, and I enjoy that. I can hear his voice, but I also hear his respect and his concern for others. The book is all about it--between the lines sometimes.”

He was touched, in particular, by his father’s empathy for the Ojibway people.

“That chapter is superb,” said the author’s son, referencing the moving story of an Ojibway boy. “I was raised with that concern, and I am sure that that is one of the reasons Trent was the first university in Canada to have a department of Indigenous studies.”

Tom Symons, the first president of that university and a founder of the field of Canadian Studies, served as chair of the 1970s national commission on the subject of Canada.  The Commission’s 1976 report, To Know Ourselves, set out a road map for the subsequent study of Canada and the promotion of Canadians as a people that mix sensitivity with conviction, qualities that Symons saw in his dad’s book Ojibway Melody.

“My interest in the rapport between French and English people is drawn from the book,” said Tom. “You sometimes don’t recognize the deeper values of the author because it is written so amiably, but the book is a touchstone for me and the things I value.”

This conversation convinced me that every Canadian could benefit from a trip to the cottage described in the first Leacock Medal-winning book and, again, made me think that I might be on to something with this project.

It also gave me hope that a person who, like Ojibway Melody, is over sixty years old and a little tattered on the edges might still have something worthwhile to say about Canadian humour.
Writing Exercise

In the voice of a former fishing guide from Georgian Bay, describe your first day at work as a stockbroker on Bay Street in 1987.


Harry Symons was a vice-president with Confederation Life in charge of real estate holdings in Toronto and liked to get away from the pressures of the city.

Harry Symons held the full copyright on the book. The first edition of Ojibway Melody carried the marks of Copp Clark Co. and Ambassador Books; the former did the printing and the latter was Harry’s distributor.

The convalescent hospital where Harry was sent in WWI was established by Harry’s future father-in-law, the wealthy Canadian lawyer and businessman William Perkins Bull. Other patients at the centre during this period included decorated pilot Billy Bishop and future Governor General Georges Vanier.

Harry Symons’s family has possession of sculptor Emanuel Hahn’s original casts of Stephen Leacock’s face in profile and the Sunshine and Mosquito back used to mint the Leacock medals.Tom Symons, born May 30, 1929, also served as chair of the Ontario Heritage Trust, the Ontario Human Rights Commission, and the Historic Sites and Monuments Board.
The history of Canadian Studies and the Commission are outlined in the Canadian Encyclopedia (online)--Canadian Studies--author S. McMullin http://www.thecanadianencyclopedia.com/articles/canadian-studies accessed September 28, 2013.