Dropping In - Doull's in Dartmouth 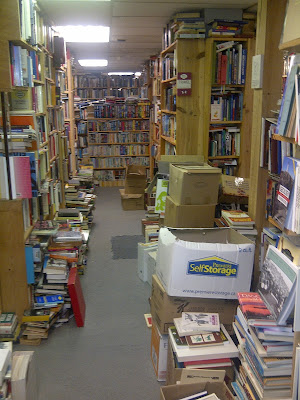 When I finished reading, reviewing, and regurgitating the contents of the Leacock Medal winners last year, I pledged to thank all those who helped me along the way by giving each a copy of the resulting book.

The people marked for this tribute included those who helped me without knowing it and those who did it in exchange for money: the owners of independent book stores across Canada.

As most Leacock Medal winners are out of print, I could not have assembled my collection without those bookshops, and whenever I can, I try to drop in on those that  provided me with a book or two to add to my Leacock Medal collection - to give them a copy or two of my book to add to their pile. 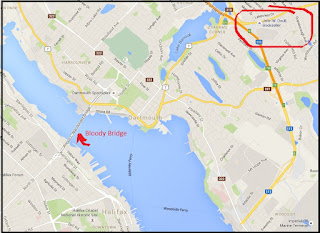 This week, I was in Halifax, and I knew I had to make time to crawl over the (bloody-slow –pack-a-lunch) Macdonald Bridge to see J.W. Doull’s in Dartmouth.  I can’t find the receipts, but I think  Max Ferguson’s 1968 winner “And Now … Here’s Max" was one of the books I got in the mail from this store.

John Doull has survived in his idiosyncratic trade for a long time, having started out in downtown Halifax years ago and deserves his reputation for persistence in a business that has crushed many souls.

He and his store are well known locally, but you could be forgiven if you drove by the place without a second look. 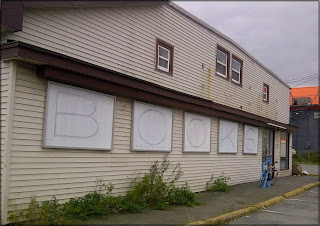 Aside from its signage, the building might be mistaken for a very large, abandoned storage shed.

But for those who seek it out, the location is perfect.  Lots of parking and it literally sits on a “Main Drag” – 122 Main Street.

And lots of people do seek it out for that wonderful, disorganized, and cluttered atmosphere of quantity and quirkiness that propels certain used bookstores into a kind of brilliance.  The Doull’s atmosphere is enhanced not only by the number of books and crowded shelves, but also by its specialization in marine, nautical, and Atlantic Canadian works.

I wished I could have stayed longer, but I had other commitments.

Still, I may not have heard the last of Doull’s. 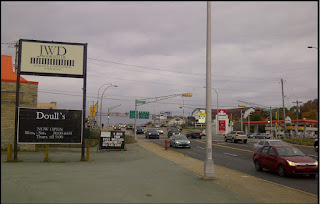 The young guys manning the cash and the bookshelves took my email address along with the gift of a few books.

"We'll check out the lists for first edition and signed copies of the Leacock Medal winners," one said, suggesting that these  might replace some second or third edition, signature-free ones in my collection.

That was nice.  It made me feel that my treasure hunt and Leacock Medal book adventure might not be over after all, and, of course, it made me even more grateful that people like John W. Doull endure in the big-box and e-book age.