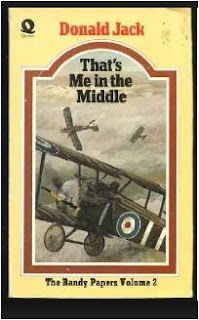 That’s  Me in the Middle, the second Bandy memoir to win the Leacock Medal, wormed its way into my head as a home-made, audio e-book.  It was painful.[i]


The British born author Donald Jack used the English approach to quotation marks.  My digital recorder reads these single apostrophes as something sounding like “Backload.”  Listening to this book, I heard an electronic voice say “backload” thousands of times.  This technology may have its origins in C.I.A. interrogations.


But when you’re driving across the Prairies alone, you soon accept the situation, get used to hearing that word, and really, really appreciate how much Donald Jack relied on dialogue to tell his stories.  And this is the point.


Donald Jack may be the Leacock Medal winner that I admire most.  He won the Medal three times by following the same mishap-prone character.  Yet it never became tiresome, and from what I have read, Jack passed away after forty years of Bandy stories with people across Canada and abroad longing for more.


WW I pilot Bartholomew Bandy gave Donald Jack a great vehicle for humorous storytelling, but the only sufficient explanation for the long-term success has to be Jack’s ability to entertain with written words, and it seems he had particular fondness for the words people speak.


As with the previous Bandy book,[ii] this one puts our hero through varied adventures.[iii]  All feature long strings of dialogue and, for me, lots of “Backload, Backload, Backload” listening.


The greatest flurry flies around Bandy’s relationship with the English girl Katherine Lewis, who is now his fiancé.  The two eventually marry despite an episode in Bandy’s hotel room involving Katherine, an amorous older woman, a former Russian Prince who is now a hotel waiter, the Prince-waiter’s lover, her husband, and Bandy.

Donald Jack manages the farce and multi-participant quotes, rarely naming the speaker. Yet somehow he makes it easy to follow.


An award-winning playwright, Jack wrote the first Canadian play to be performed on the main stage at the Stratford Festival, and it’s tempting to think that the study of his plays might be a good way to develop a transferable skill in dialogue.  But plays are works written for visual performance with obvious speakers.


In a book, you need other tools unless you attribute everything.  Sometimes a speaker can address another person by name.  In Me in the Middle, this dialogue technique draws on the military and government context, which associates a junior character with deference and salutations like “sir.”  But it’s easy to abuse such tools, and it doesn’t erase the need for vocal consistency in the mouths of the characters.


Perhaps, the best way to study unadulterated dialogue is to listen closely to radio plays and, if possible, review the scripts without sound.  In radio, the speaker is rarely identified by anything more than a voice.  The radio play words fly back and forth rapidly and yet the listener, even when driving a car, follows along.


The Bandy books, not surprisingly, made for good radio.  CBC turned the first book, Three Cheers for Me, into a 5-episode radio play in 1972 with Don Harron as Bandy. The series was so popular that Radio Canada International sold it as three (3) LP records.  This success set the stage for the publication of Me in the Middle and more Bandy memoirs.   In this way, unattributed dialogue and Jack’s strength in it really led to Bandy as a series.


Those old CBC records are rare and very hard to find now. But it might be worth the effort to track them down. It has to be easier than cobbling an audio book together and listening to hours of “Backloads.”

[i]  Aside from being borderline copyright-law illegal, the procedure is tedious and not recommended over simple purchase of e-books. But I am sharing it with you as a fan of old, out-of-print, non-e-books.  I scanned Me in the Middle at the rate of two pages at a time into a series of electronic files that I in turn emailed to myself.  You have to scan into a TIFF file (Tagged Image File Format).  Next you open them in a standard OCR (optical character recognition) system like Microsoft™’s and then, the files are converted into an older version of Word ™.   You can now open the file in a Digital Voice Editor program, which asks you, in turn, to pick a male or female, the right speed, and adequate volume and to click through the stages of saving and transferring, eventually putting it all into a folder on the digital recorder if the computer successfully recognized the USB input and picked a folder in the recorder with enough e-room.  Whew – e-uhh. Whew – e-uhh.
[ii] In the first Leacock Medal winner Three Cheers for Me, Ottawa Valley hero Bandy drops out of medical school during WW I to join the army.  Sent overseas, he survives the trenches and even emerges as a hero in part by capturing his own colonel in a raid on his own lines.  He transfers to the Royal Flying Corps and meets Katherine Lewis, when he crash lands on her family’s estate.
[iii] A government Minister elevates Bandy to the rank of Lieutenant-Colonel, prods him into making a speech that insults the upper ranks and then leaves Bandy to face the repercussions without political protection.  Demoted, Bandy is sent to the 13th Bicycle Battalion back on the frontlines. Although he rejoins the Flying Corps, he gets lost landing his plane in militant Ireland.  Along the way, Bandy bumps, Forrest Gump-style, up against famous personages including Lester Pearson and Winston Churchill.
Newer Post Older Post Home