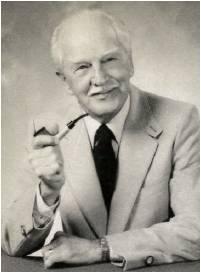 Mervyn J. Huston may be the only Leacock Medal winner to have had his own nuclear reactor.


Like Stephen Leacock and some other medalists, Huston considered humour writing to be a sideline.  For most of his life, he regarded himself as a scientific researcher, academic, and educator in an unrelated field.


For over four decades, he worked in pharmaceutical sciences spending the last 32 years as Dean of the Faculty of Pharmacy and Pharmaceutical Sciences at the University of Alberta.  Just before his retirement in 1978, his UofA Faculty became the first in Canada to acquire a SLOWPOKE Nuclear Reactor for its research designed and built by Atomic Energy of Canada Limited (AECL).  The reactor provided a source of neutrons for chemistry and other research.


Huston was born in Ashcroft, British Columbia, in 1912 and went to school in Kamloops before heading off to Edmonton where he would spend the most of his academic days. His Bachelors and M.Sc. came at UofA.  He earned his Ph.D. in Pharmacology during the war (awarded in 1944) at the University of Washington.


In case you might think he was merely showing up for his scientist job, punching the clock, and collecting his pay in order to have the means to do his humour writing, here are some of his credentials from the pharmaceutical sciences realm: President of the Canadian Pharmaceutical Association; President of the Canadian Foundation for the Advancement of Pharmacy; Canadian delegate to the Council of the Federation International Pharmaceutique; Editor of the Canadian Journal of Pharmaceutical Sciences: winner of the Dr. E.R. Squibb Award in Pharmacy, Biochemistry and Public Health, and author of four textbooks and over a hundred scientific and professional papers.


Still it is hard to deny his other side.  He was a professional saxophone player who toured with dance bands during his university student days and later played the bassoon in the Edmonton Symphony Orchestra, and even performed in a rodeo. 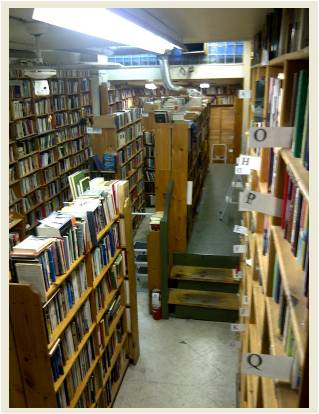 But his favored extracurricular activity was humour writing. He produced many books of this nature:  the bestselling The Great Canadian Lover, (Hurtig 1969), Toasts to the Bride, (Hurtig 1969), Canada Eh to Zed, (Hurtig 1973) Great Golf Humour (Hurtig 1977), and Golf and Murphy’s Law, (Hurtig 1981).


His personal favorite book was Gophers Don’t Pay Taxes, (Tree Frog Press 1981) – the Leacock Medal winner, which he finished off after retiring from his day job.


But he did, however, retain the title of Professor Emeritus in retirement - this allowed him to maintain his association with the university and that nuclear reactor.


“It’s better to fail gloriously than to succeed meanly ... a person who has not made a plenitude of boo-boos in his life hasn’t been aiming high enough.” 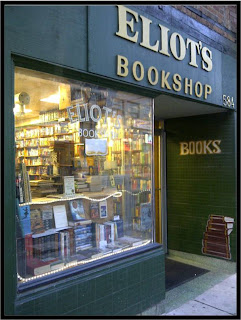 BY THE WAY ...
(After many failed attempts to locate and acquire a first edition Gophers Don’t Pay Taxes, I came across one unexpectedly while scanning the wooden shelves in Eliot’s, a quaint, old-fashioned kind of bookstore on Yonge Street in Toronto on St. Patrick's Day 2013 (I remember the date because a reveller came out of a bar near the store and threw up on the sidewalk in front of me - ah ..  Yonge Street).
The book was only $6.95 --- and signed by Huston !

This kind of book-finding luck visited me a number of times.  I suspect now that books have been signed by an author tend to be the ones that are preserved from the dumpster and recycling and thus end up on old bookstore shelves for text-based treasure hunters like me)