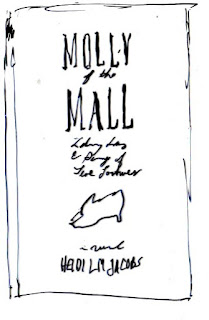 The story of a young woman working in an Edmonton shoe store does not easily resonate with my life as an older Ottawa male whose interest in footwear runs from modest to nil.  But within the first few, short chapters of Molly of the Mall (NeWest Press), I felt touched and was certain I would enjoy the book.

This year’s (2020) winner of the Leacock Medal for Humour splits its chapters between the days that Molly MacGregor spends in the Petit Chou shoe store and her terms as a university undergrad.

Though never specifically identified, the mall that holds the Petit Chou is West-Edmontonian with a wave pool, giant sailing ship, submarines, screaming peacocks, bewildered emus, mock Bourbon-Street restaurants, competing shoes stores, a rink, and at least one bookshop.  It provides a suitably eccentric ambiance for the store where Molly stands and strains through long days with quirky management, less committed coworkers, and performance measures that encourage the sale of gratuitous polish and protectors.

Stocking shelves and staring at feet, she thinks of classic literature, the romance of Jane Austen, and her aspirations for a degree in English.

While I have never worked in a mall nor ever squeezed feet with a promise that a product would stretch, I have, like most people, had physically and psychologically trying times on the job and found comfort in the distraction of stories about the exotic and faraway.  I thought this might be the reason for my optimism and feeling that this would be a book to enjoy.

But as I read through the pages, I found my personal connection to the story was even stronger. I realized that this was precisely the kind of book I tried to write: one that I had submitted to the Leacock Medal competition a year earlier. My book, Governing Travails, sought to share the career experience of a federal bureaucrat through stories peppered with parodies, poems, and lists, all cloaked in a love of literature and attempts at humour.

Molly of the Mall does the same, but with greater effect, greater consistency, and clearly greater success. So, my reading morphed into a study of technique and style and envying admiration.  The author, Heidi Jacobs, has the background to teach someone like me a lot.

Like her protagonist, Heidi worked in a mall and sold shoes in her youth, but she also went on to earn multiple relevant degrees: a BA,  an MA, and Phd in English and later a Master of Library and Information Science. Today an expert in information literacy, she serves as the English and History Librarian at the University of Windsor’s Leddy Library and has published peer-reviewed works on a range of topics.

These credentials find life in the personality and character of Molly MacGregor, whose name honours Dafoe’s Moll Flanders and reflects the literary and artistic interests of her university professor parents. Molly cites great authors easily and imagines herself in European landscapes surrounded by the characters created by Austen, the Brontë sisters, and the other writers that she knows well.

She also longs to study others like “Eliot, Dickens, Burney, Waugh, Joyce, and Radcliffe,”  and this ambition flows into the chapters that take Molly away from the mall and through her semesters as a student who tangles with writing assignments, hangs out with friends, and dreams of love.

I think this non-mall, less absurd element elevates Heidi’s book above efforts like mine. It makes Molly’s story more human, more relatable than a collection of quirky episodes and bits of humour however literate and classically inspired. The format also emphasizes the two sides of life, the real and the imagined, and the sweetness of the interface between the two.  It is this feature and sum of these parts that make the book something an older, shoe-store adverse bureaucrat might enjoy.
Writing Exercise
Tell the story of your summer job in a book store that also sells custom made orthotics called Shakespeare and Comforting.