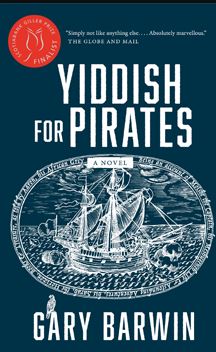 Scroll Down for Other 2017 Shortlist books

My wife has her own way of describing my book events.

Fub – short for Finger Up Butt.

I’ve sure done my share of standing around, ignored.  Book signings in empty stores, roundtables as the least popular panelist, and readings before an open bar.

At least I could say I have never had to perform parrot sex in front of my parents.

On the eve of his 2017 Leacock Medal win, Gary Barwin entertained his mom, dad, and others chewing on poultry at Orillia’s Mariposa Inn with an animated reading from Yiddish for Pirates.  The chosen excerpts told of piracy and persecution, love and lashings, the Torah and torrid parrot sex.

I know no one who doesn’t laugh at the book’s premise: a pirate story told by a five-hundred-year-old kibitzing African grey from a perch in a Florida seniors’ residence.  With a sip from the fountain of youth and hundreds of years to learn, the narrator, Aaron, absorbed many languages, many stories, and enough Yiddish to give life to his reminisces of high seas adventure on the shoulder of his master Moishe. Moishe, or, when opportune, Miguel, was a Lithuanian Jew whose life leads him through Inquisition-era Spain to the captain’s chair of a Caribbean pirate ship.

I like to laugh, read engaging stories, and even to listen to old timers parroting their memories. I enjoyed the book in this way.  But I can’t help reading stuff like Yiddish for Pirates through the lens of the Leacock Medal and my aspirations to be a writer with fewer fubs.

Obviously, the premise creates a powerful vessel that is easy to recognize as something different.  But it could have run off into a sea of clichés and corniness in my hands. 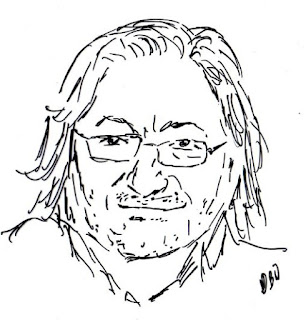 Gary Barwin avoids the reefs with skill and imagination worth studying.  A composer, poet, and artist as well as author of twenty books, he executes the parrot and pirate idea with great creativity, and this might be expected. But he also brings in his affection for Yiddish culture and his knowledge of history in an elegant way that informs and inspires without ever pushing the story off course or taking the wind out of its sails by saying stuff like “avoid the reefs,” “off course,” and “taking the wind out its sails” – too much.

With the same mastery, Barwin uses the Spanish Inquisition, piracy, and people of another era to raise touchy issues of today and suggest why the persecuted might find recourse in terrorizing violence.  A parrot seeking a partner after months at sea, oblivious to the willingness, gender, and precise sub-species of the other also speaks to the interface of casual sex, loneliness, biology, and the mores of other animals.

But I see Yiddish for Pirates as an homage to classic novels.  Aaron certainly reminds me of the narrator of Don Quixote, a translator of a second-hand account written in Arabic; and much in Moishe’s story (the book’s full title is Yiddish for Pirates: Being an Account of Moishe the Captain, His Meshugeneh Life and Astounding Adventures, His Sarah, the Horizon, Books and Treasure, as Told by Aaron, His African Grey) echoes Gulliver’s Travels (originally Travels into Several Remote Nations of the World. In Four Parts by Lemuel Gulliver, First a Surgeon, and then a Captain of Several Ships).  The book also sits well beside earlier Leacock Medal works like Morley Torgov’s that introduced others to Jewish community and cares with humour and kibitzing stories.

Aaron, in fact, tells the reader at the outset that his tale will follow well-worn storytelling paths and will raise model questions like “and then what happened?” and “what happened next?” and “what is this treasure and where’s it buried?” Does he get “the girl?” And, additionally, what about all the balmelocheh, alter kaker, meshugeh, farkakteh, sheyneh, keneynehoreh, shvants, roytkop, sheygets, oysgedarteh, kvelled, meshugener, shmeckel stuff and parrot sex in between?

It hooks you and reflects the force of Yiddish for Pirates, which all flies out of that funny premise and the parrot narrator.  We don’t expect perfect grammar.  Whole sentences. Words that we should recognize.  Or even word-like sounds.  We accept candor and cover-ups equally.  It sets the stage for unconstrained and bold story telling.

So my lesson here is that when feathered, you can be unfettered – and be more entertaining in book writing and book readings.

I will think about this a lot when I try to write future fiction, and maybe, I should buy a parrot costume and practice thrusting motions for my next fub.

Writing Exercise
Recount a 17th century expedition up the Ottawa River through the mouth of a voyageur’s edgy pet beaver Fub - throw in some aboriginal science fiction. (Here is my shot at it).
Newer Post Older Post Home