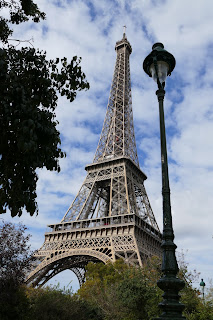 A few days after this year’s Leacock Medal banquet (2015) on the shores of Lake Couchiching, I received word of my appointment to a committee of the International Council for Science.

These two things have a link.  Bear with me.

﻿ At the Leacock event, the 2015 medal winner Terry Fallis described how he had written a scene for his award-winning book, No Relation, in the Paris café Les Deux Magots.  He did it sitting on the stool worn smooth by Ernest Hemmingway.

I thought this was cool.  Not so much the Hemmingway-butt thing, but the idea of combining work and holidays in Paris and the act of seeking out a specific locale to establish a personal connection with it.

But I’m cheap, and on that night in Orillia, a trip to Paris did not seem imminent.
Then the above-mentioned appointment. The International Council for Science is headquartered in Paris; at least half the committee meetings take place there -  a point my wife was quick to note, and a coincidence I could not ignore.

With Terry’s story as inspiration and this opportunity, I thus set out to couple work in Paris with my own printed-word pilgrimage.

As a student of Leacock Medal winning books, I knew that at least a few other winners had strong Paris-connections, and I started combing through my collection for more. 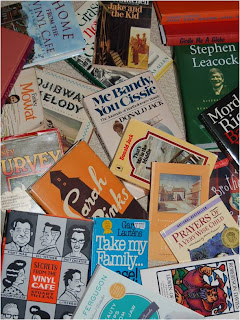 Many of the books or their authors flowed through France in the context of one or more of the World Wars.   Three-time Leacock Medal winner Donald Jack put his fictional hero Bartholomew Bandy
through the skies over France as a WWI pilot, and the very real first Leacock Medalist Harry Symons (Ojibway Melody – 1947 winner) put his own body through the same airspace and even slammed it into French soil on occasion. The 1964 winner Gregory Clark served on the European frontlines in both wars.

But a pilgrimage to honour these writers and stories might be better done through a side trip to Brittany and the Normandy coast in some future visit to France. 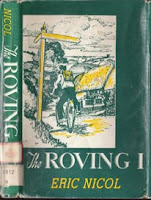 The most obviously Parisian Leacock medal winner is The Roving I, the 1951 recipient written by Vancouver humorist and eventual three-time Leacock Medalist Eric Nicol, whose book documents his year as a grad student at the Sorbonne.

In Paris this month, it was easy to tour the streets around the university, which have changed little for hundreds of years and undoubtedly still echo the ambiance that surrounded Nicol and his Roving I stories.

But Nicol’s book has very few references to landmarks, eateries, or streets that would demand particular attention.

One exception was the original site of the the Bibliothèque nationale de France (BnF), now known as the Richelieu-Luvois Library site. It is an impressive stone building with tall pillars, ornate exterior decoration, and imposes just as it did in Nicol’s day.

And, just as in Nicol’s day, the bureaucracy is imposing.

I knew that I could not see those beautiful reading rooms that enchanted Eric Nicol without a pass, but was surprised to learn that it would take five days to get one.  Perhaps, another time.

Few people might think that Notre Dame Cathedral could be linked to the Leacock Medal.  But the 1955 winner Robertson Davies makes that association.  In an oft-quoted 1986 interview later printed in the Paris Review, he said that he was first inspired by literature reading Victor Hugo’s Notre Dame de Paris (a.k.a the Hunchback of Notre Dame) at the age of eleven.  In that same interview, Davies said that he regarded himself, above all else, as a comic writer who aspired to make people laugh. 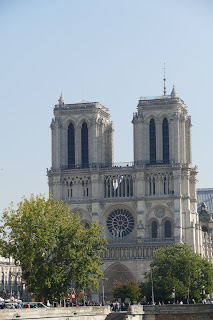 “I have a very high opinion of comedy; comedy is fully as revealing in its probing of human problems as is tragedy,” Davies said. “The thing about comedy that I greatly value is that it is infinitely harder to fake than tragedy.”

These thoughts made me smile as Michèle and I toured a place that made her teary.

You might be able to cobble together a humorous Canadian literary tour of Paris with such stuff if you worked at it.  Given the number of Leacock Medalists who have quoted Oscar Wilde over the years, you could probably pad things out with a trip to his grave in Père Lachaise cemetery, and there is an independent Canadian book store, the Abbey Bookshop, in the Quartier Latin that should be marked on any Leacock Medal map. 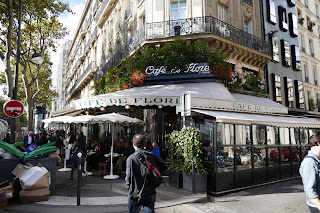 But your tour group would not be satisfied with anything calling itself “Literary” and “Parisian” if it did not include pit stops at Left Bank cafés like Les Deux Magots or the more celebrated sipping spots like the Café de Flore.

The Procope which calls itself the world’s oldest coffee house (the Caffè Florian in Venice says the same) counts Victor Hugo, Napoleon I, Voltaire, and other A-list French history celebrities among its past clientele.

But these places are a bit expensive, a little touristy, and often crowded.  Mainly expensive.

So, I told Michèle we should eschew these spots for something special, different, and peculiarly Canadian.  The Café Mabillon, nestled right beside Les Deux Margots and just down the street from the other, more celebrated Saint-Germain-des-Prés places.

It is known as a bit of a dive;The greatest number of its Trip Advisor ratings fall in the “Terrible” category;

And tourists routinely rank it as “awful” online with comments like “Stay Away.”

But others, particularly the locals – the full-time Left Bankers - call it authentic and a true Parisian café.

For me, the appeal comes, in part, from its dive-like atmosphere because this underpinned the Mabillon’s role as the hangout for Barney Panofsky’s bohemian cronies in Modecai Richler’s 1998 Leacock Medal winner Barney’s Version, possibly my favorite of the award-winning books.  Barney and his fictional friends would have been run out of those other, posh cafés.  They argued loudly, smoked too many things, arrived drunk, and nursed their purchases too long.

The Mabillon is perfect for this type of customer.

The waiters can hold their own with the most obnoxious clientele and are often focused more on women walking by the café than serving customers anyway.  The Mabillon also is comfortable with people filled with alcohol. 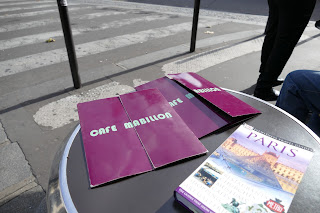 Its mid-day menu begrudgingly offers two scoops of ice cream and some sorbet to those who insist on ordering something that is not liquid.

Richler spent two of his young-writer years in Paris.  I think he was still in his teens when he arrived, had little money, and had to nurse his drinks.  It was easy to assume that he did not pick the Mabillon from a guide book when writing Barney.

In fact, in his exhaustive biography of Barney’s creator, journalist Charles Foran celebrates the spot with a photo of Richler writing on a Mabillon café table.

With this backdrop as motivation, I talked Michèle into skipping over those posher places in favour of the Mabillon for our Left-Bank liquid lunch. 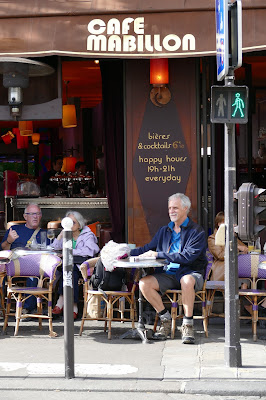 It was great to pass time with ghosts of mythical Barney and mischievous Mordecai, to soak up the incongruity of purposely picking a place panned by Trip Advisor, and to save some money.

But I may have felt differently if I had known how badly Michèle needed a bathroom break. The need formed her first question when a Mabillon waiter finally appeared, and she headed off.

“You kind of owe me,” she said upon her return. “The washrooms haven’t been cleaned since Richler hung out here - you take a dark spiral stairway down to it, the rooms are lit with 1940s bordello light bulbs, and … and … I heard something scurry across the floor behind me!”

The next night we dined for 200 Euros in an upscale spot near Les Halles, and I thought maybe Les Deux Magots might not be such a pricey place after all.

Still, if I go there next time I’m in Paris, I won’t ask for Hemmingway’s stool.

I will ask to sit where Terry Fallis wrote part of No Relation.  It might cost an extra couple of Euros - but it will give me another Parisian Leacock Medal reference for this literary tour.

Also Is it easier to sell Canadian humour in Paris ?