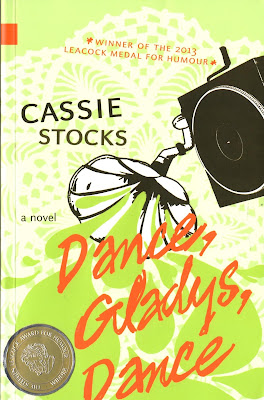 I felt relieved after reading the 2013 Leacock Medal winner, Dance, Gladys, Dance. Having completed what was then the last book on my list might have had something to do with it. But the feeling flowed mostly from knowing that I could look Cassie Stocks in the glasses, should we meet again, and say, “I liked your book.” Cassie has a well-tuned bullshit detector, so I would be bound to the truth.
A down-to-earth Albertan, now Saskatchewan dweller, Cassie makes fun of herself, laughs a lot, and connects with lots of people. She lists one-time biker chick, actress, gardener, waitress, office clerk, aircraft cleaner, fowl farmer, and Eston Co-op employee in her author bios.
When she added award-winning novelist, it gave her more opportunities, but in addressing the June 2013 Leacock Medal banquet, Cassie said that she enjoyed the profile mostly because of the young women who identify with characters in her book. Cassie said many “don’t think they’re like everyone else, and don’t feel normal.” She liked the thought that her book may have helped them.
“Women are by and large less likely to believe in themselves as artists,” said Cassie, the first woman to grab the medal since 1996. “And when an artist gives up their dreams and gives up their work then we’ll never know what we have lost.”
Cassie Stocks cares about people, including fictional dead ones and people who exist only in her imagination. In a banquet speech that went on a lot longer than Patrick deWitt’s thank you, she described her characters one by one, saying she not only loved fleshing them out as an ensemble, but loved them individually.
“I like to call them freaks; they are odd and a little bit outlandish . . . strange . . . and I think they’re beautiful, all of them.”
Frieda, the narrator, lacks self-esteem, dwells on imperfect decisions, and shares some of Cassie’s curriculum vitae and sense of humour. Frieda decides to give up on art, get a “real job,” and become “ordinary.” She stops seeing the world as a “series of potential paintings” and starts talking about the weather.
A classified ad for an old phonograph, ending with “Gladys doesn’t dance anymore--she needs the room to bake,” launches Frieda’s adventure and the encounters with her disembodied mentor.
“I made Gladys a ghost because I wanted her to tell her own story rather than, you know, through someone else or someone reading a diary,” Cassie said. For many reviewers, the characters make Dance, Gladys, Dance work.
Caring about your characters provides a pretty good starting point in writing fiction. With no exception I can recall, characters are the vehicle for moving a story along and exercising all those techniques of action, dialogue, and thinking. To be believable, no matter how nice or disagreeable, they have to tap into something human, usually a bit of the author. In Frieda, the relationship between author and subject was glaring, but Cassie tweaked the superficial details to create a character with her own energy. Some of Cassie’s characters had little in common with the author, but enough for a connection. All of them had their own interests and motivations.
“Kurt Vonnegut said make your characters want something . . . right away . . . even if it’s just a glass of water,” Cassie said, explaining that Vonnegut recognized that even characters paralyzed by the meaninglessness of modern life are human and have to drink water.
Her central character wanted something: to be ordinary and get a real job. 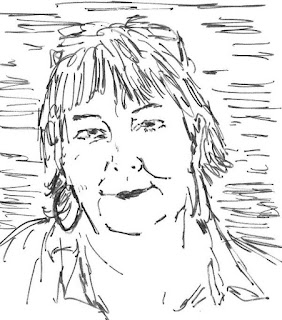 I have a real job of sorts, and this made the trip from Ottawa to Orillia and back difficult to justify. But attending the 2013 banquet struck me as something that would be good for me to do, given all the time I’d spent studying Leacock Medal books this past year, especially after my wife said, “This would be good for you to do, given all the time you’ve spent on this thing this past year.”
It was a five and a half hour drive each way, so I decided to stay overnight at the Geneva Park Conference Centre on Lake Couchiching. It wasn’t much of a hardship.
But because most people attending the banquet live in Orillia, only a handful stayed overnight--mostly people from far away. People like Cassie Stocks and me. We had breakfast together. Cassie was dejected because she thought her sometimes rambling speech was a flop. She wanted to “crawl into a hole like a gopher.”
Cassie Stocks could not have picked a better bacon and eggs partner. I pumped her back up by telling her how much I enjoyed the talk and connected with it.
“Don’t worry--only a few hundred heard your speech,” I said. “Millions will read my glowing account of it someday.”
She laughed again, and we talked about the craft of humour writing and how funny it is to study funny. In her speech, she cited sources such as the Humor Reference Guide: The Comprehensive Classification and Analysis, which identifies some ninety-seven different types of humour or flavours of incongruity. These include the liar paradox, the deviation from the ideal, the unexpected honesty, and anti-humour humour: “the intentional violation of the expectation of the joke: the joke turns out not to be one, and it’s funny because ironically it’s not funny!”
“Now, I think that definition is totally hilarious!” Cassie said, also noting humour-writing advice from the previous female Leacock medalist Marsha Bolton: “Wear tight pantyhose at readings ’cause it makes you stand up straighter.”
So, I like Cassie Stocks. You don’t need to like every author you study, but I think that, like working on characters for a book, you need a human connection that makes their mistakes yours, their humour something you might appreciate, and their lessons something you might want to write down and remember.
Writing Exercise
Write three paragraphs to introduce a ghost who is doing something not normally associated with the spirit world, like brushing teeth, going to the bathroom, or doing a humour writing assignment.