2012 The Sisters Brothers by Patrick deWitt 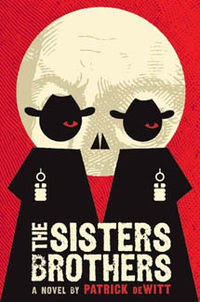 At the 2013 Leacock Medal award banquet, the regular attendees at my table told me that they found Patrick deWitt’s acceptance speech the year before to be the funniest and most memorable one ever. They laughed because the speech was exceptionally short. Some of them recalled his remarks as being limited to a modest and soft, “Uh . . . uh . . . thank you.”

But that’s an exaggeration--just a modest and soft bit. DeWitt did add a few crumbs on the subject of
creativity for those listening closely.

But that was about all. My tablemates thought this was funny and kind of cute because of their own expectations.
The annual bun-fest, always held in or around Orillia, gives locals a night out that includes a cocktail hour, book signings, and a chance to meet current and past medalists. The performances of previous winners have created the anticipation that the medal recipient’s speech will be funny and thought-provoking and will help justify the $65 per ticket cost of the evening out. Patrick deWitt is funny and thought-provoking when writing books, but not so much when asked to perform on stage--unless unintentionally, because of the setting.
Patrick probably finds it more comfortable in the spotlight now after over two years of picking up honours for his dark but comical novel, The Sisters Brothers, the book that won the 2012 Leacock Medal. Still, I suspect he remains most at ease in the context of written words. 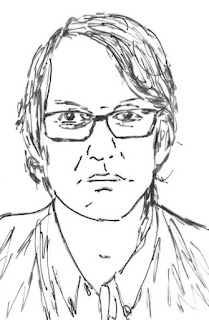 In another way, the issue of context probably constitutes the greatest factor in the humorous effect of his medal-winning book. Please allow me to illustrate with the following lifeless summary of The Sisters Brothers, which I prepared as an exercise.

The Sisters Brothers, the second novel by Canadian-born, Oregon-based Patrick deWitt, describes a transforming journey made by Eli and Charlie Sisters, two men who are different in many ways but have a fraternal bond that keeps them together as business partners. They do contract work, now exclusively for a powerful entrepreneur identified as “the Commodore,” who has asked them to travel to California on his behalf and negotiate with Hermann Kermit Warm, an inventor with a special process for mineral exploration. The brothers are to deal with Warm through Henry Morris, an intermediary in the Commodore’s employ.
The Commodore puts hard-nosed Charlie in charge. Eli, the sensitive narrator of the story, thinks about leaving the business because of all the travel and the tense interactions with customers. Eli also worries about his weight, his teeth, the lack of female affection in his life, his widowed mother, and his brother Charlie’s taunts. Charlie drinks heavily and focuses clinically on work.

Whew! That was tough, trying to outline the story of The Sisters Brothers without the nineteenth-century context of cowboys, gold rush prospecting, horses, guns, knives, and killing. I pulled those elements out of the description to try to evaluate the impact of the incongruous setting and the writing style.
The book teases us into compassion for the brutal and reminds us of the universality of human concerns in the tradition of recognized literature. It has carried off so many literary prizes that any comment on the quality of the writing seems redundant, and critics in Canada, the United States, and abroad have detailed the book’s literary merits many times.
So, I focused my thoughts on why the book made me laugh, always coming back to the gun-slinging, the dirty work of mid-1800s hit men, and the violence of the Old West in contrast with the clowning and bickering of the brothers.
When Eli confesses a fear of spiders, cares for his one-eyed horse, fusses over toothpaste flavours, or feels hurt over his brother’s teasing, we might not find it funny if he weren’t also an assassin ready to blow a stranger’s head off or do what was “necessary” to extract information from an old woman. Because Eli, the narrator, relates all this in the formal old-time Western sort of way (“that’s some nice shooting, brother”), he enforces the incongruity in almost every passage.
Patrick deWitt definitely knows the importance of setting and context, and he may have been more aware of the expectations at the Leacock Medal banquet than it seemed.
In verifying the facts of the 2012 event, I read that Arthur Black and Dan Needles bookended deWitt’s acceptance speech. Both are polished speakers and hard to match. In similar circumstances, I too, would have limited myself to “Uh . . . uh . . . thank you.”
Writing Exercise
Write a short story about a pair of humour writers doing contract work in the Old West.

In his brief Leacock Medal banquet remarks, deWitt mused a bit about the craft of humour writing, noting some people think “life itself is a joke,” and adding, “if that is true, it is a complex one.” The author also managed to hint at his inspiration by quoting the British playwright Joe Orton. Orton, who was brutally murdered in his mid-thirties (Patrick deWitt was about the same age when he wrote The Sisters Brothers), was a champion of black comedy, calling it “a weapon” and a “dangerous” one.

He won the Governor General’s Award for Fiction and the Rogers Writers’ Trust Fiction Prize as well as spots on the short lists for the Man Booker Prize, the Scotiabank Giller Prize, and the Walter Scott Prize.
Newer Post Older Post Home