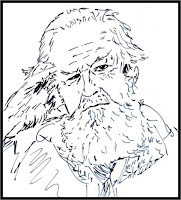 “The love of truth lies at the root of much humor.”  Robertson Davies

Much has been written about Davies, one of Canada’s most celebrated writers, and much about his live and work is easily accessible on the Internet.
Some links to fairly comprehensive bio info are provided at the bottom. But first here are few tidbits.
·         Davies was born in 1913 in Thamesville in Southwestern Ontario, the home of the Bull Dog Steel Wool Company and near the site of the War of 1812 Battle of the Thames that saw the death of Shawnee Leader Tecumseh.

·         His real first name was William: William Robertson Davies.   He had two older brothers: Fred, the eldest, and Arthur.

·         His father Rupert Davies, an immigrant from Wales, became an influential and important newspaper owner, businessman, and eventually a member of the Canadian Senate.

·         The newspaper business brought the Davies family to Renfrew in the Ottawa Valley when Robertson was a boy.  He did not like the place, later calling it one of “spiritual deprivation.”

·         Davies attended Balliol College at Oxford.  He may be a distinguished graduate of the college but far from the most noteworthy.  Its graduates include three British Prime Ministers, and many other figures from politics and the arts, including philosopher Adam Smith.

·         An actor in England when he was a young man, Davies, although he moved on to other things, retained his passion for the theatre all of his life, writing plays, several with commercial success, until he experienced the pain of high profile failure in New York with his 1960 production of Love and Libel .
·         Davies was, in fact, immensely interested in the history of the theatre, which he called “one of my great hobbies.” He started the Dominion Drama Festival and was one of the first people to serve on the Board of the Stratford Shakespeare Festival.

·         His greatest novel writing successes took the form of a trilogy of trilogies: the Cornish Trilogy which revolves around the life and the aftermath of the death of an odd art collector named Francis Cornish; the Salterton Trilogy which included the Leacock Medal winning Leaven of Malice; and the Deptford Trilogy which featured the writer’s best-known work the Fifth Business.
·         The Fifth Business is in the form of a long letter written by a college headmaster upon his retirement.
·         In 1947, Davies fell ill, was diagnosed with Hodgkins disease, a type of cancer, was treated, and recovered.  He may have been misdiagnosed.

·         Davies was the Editor of the Peterborough Examiner newspaper at the time that he wrote Leaven of Malice.   During those days, the Examiner featured regular editorials by a grumpy writer named Samuel Marchbanks, who was later revealed to be a pseudonym for Davies.

·         Leaven of Malice features a newspaper editor pestered by a would-be freelance writer who ends up being the hapless scoundrel of the story.  During this period, Fred Davies had pestered his younger brother the Editor for freelance work including funding for a trip to Nassau in the Bahamas where Fred died in a car accident just months before Leaven of Malice was published.

·         Reviews of Leaven of Malice were very positive for the most part with some notable exceptions usually from the hands of Canadian critics including Davies’ friend and newspaperman Arnold Edinborough.  Any negative criticism of Leaven of Malice today normally takes the form of comparison with Davies’ better known and presumed superior works.

·         Davies was among the most celebrated and successful authors in Canadian literature, but even his publisher (Penguin) did not always identify him as a writer, regularly listing his professions as actor, publisher, and professor.