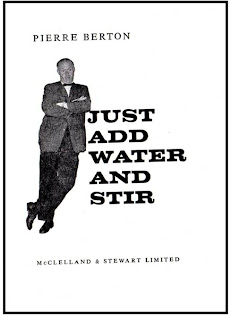 Why someone would abandon
humour writing


Like that of many Canadians, my last memory of Pierre Berton[1] comes from his appearance on the CBC’s Rick Mercer Report in 2004.  Eighty-four-years-old at the time and fated to die later that year, Berton took part in the TV program  to demonstrate how to roll a  joint.


The image made people laugh because most Canadians knew Berton as a literary icon and as part of a generation not tied to notorious marijuana use.  I’m grateful for the scene because it will remind me forever of just how damn funny Pierre Berton could be.


Despite all the achievements that marked his life, the television vignette purposely celebrated his funny side and stressed it by highlighting Berton’s Leacock Medal for Humour.  However, setting aside the joint-rolling lesson, he had, arguably, reached his peak as a humorist in Just add Water and Stir, the book that earned him that 1960 Leacock Medal.[2]


Berton devoted his subsequent writing and achieved most of his literary success working on history and other serious subjects.   In 1960, his career was taking him away from magazines and newspapers into television and radio.  This gave him different opportunities to indulge his personality and to poke at politics and culture, and he decided to direct his writing to ambitions that required research and respect.


As someone who aspired to make Canada’s history accessible, Berton had a challenge. He needed to link the fact-laden, pursed-lipped world of academia to the language and the imagery that make books interesting.   Perhaps, he didn’t want to risk eroding his reputation with the brand of humorist, which some writers think marks you for a spot at the children’s table and the basement of the CanLit outhouse.


Too bad.  I think Just add Water and Stir pulls it off, fluctuating between humour and the deadly serious in a way that make a coherent sounding whole.  It leaves you smiling, but it also includes pieces that are grim. Berton struggled to describe the book calling it “a random collection of satirical essays, rude remarks, used anecdotes, thumbnail sketches, ancient wheezes, old nostalgias, wry comments, limp doggerel, intemperate recipes, vagrant opinions, and crude drawings...”


Although officially an editor and journalist, Berton admired parody and satire and imbeds his editorial comments on education in episodes entitled “Fun with Dick and Jane” and “Little Red Riding Hood.”  His observations on the changing Canadian society includes essays on the size-of-your-office corporate culture and his “Modest Proposal for a Divorce Ceremony.”[3]  In critiques on popular periodicals, he attacks Time, Vogue, and Mayfair, but lauds Mad Magazine.[4]


You recognize the outrage in Berton’s humorous pieces because it echoes the opinions in the accompanying somber ones on social reform, racial profiling, capital punishment, wiretapping, and torture in Canadian prisons.  He also rants over commercialization, politics, and mass media. But, surprisingly at first reading, his harshest words fall on food recipes - the issue behind the title of the book.


Berton calls “Just Add Water and Stir” the “most hideous phrase to enter the language ... (adding that) ...the greatest and most monstrous villainy foisted on the consuming public has been instant coffee.”  In the middle of the book, via a pink paper insert, he tries to counter the 1950s version of fast food with his own semi-serious recipes. They’re different.  Rather than setting out an ordered combination of ingredients and steps for preparation, they tell stories - the story of making a soup, some baked beans, and a plate of corned beef hash.


Anticipation and the joy of food fill these recipe-yarns.


The phrase “Just Add Water and Stir” makes an ideal title for this book because it evokes a bouillabaisse blend of different kinds of spices with meaty chunks, but it also speaks directly to Berton’s overriding message and the notion that pulls the mix together: that people should care about things.


“We live in a dehydrated age and we are in mortal danger of having our souls dehydrated as well,” he says explaining that “in the kitchen ... we will cheerfully eat sawdust, as long as it can be poured straight from the package to the plate.”


For him, instant coffee reflects a society increasingly coloured by “not caring” - in this case, not caring about the effort taken to cultivate the coffee beans and not caring enough to honour your guests with a decent beverage.  We would classify the recipes and food rants as humour, but many words - about people not caring - could have been easily injected into his pieces on legalized torture and capital punishment.


The book closes with some of those “Old Nostalgias,” around his father, his childhood in the Depression, and early days in journalism.[5]  Berton was still in his thirties when this book was produced, and I am not sure whether he really had the credentials for quality nostalgia, but his words stimulated my own.  I miss the funny Pierre Berton, Ben Wicks, Barbara Frum, Peter Gzowski, Eric Nicol, Mordecai Richler, Gary Lautens, Bob Johnstone, Max Ferguson, and all the others who, through a mix of humour and caring, gave meaning to the word “Canadian” for most of my life. 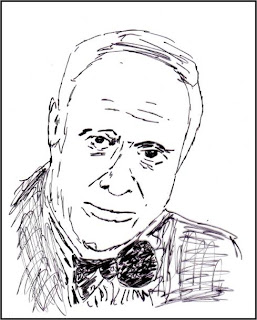 Berton’s book amplifies this impulse for nostalgia with profiles of Glenn Gould, Charles Templeton, Russ Baker, and others.  But Just add Water also admonishes people like me who become wistful over a past that doesn’t seem to exist any longer. Berton says it “still exists ... as (it)  always did...You (just) do not see it any more, my friend.”


Perhaps, this jab makes a better reason to be grateful for my last, joint-rolling memory of Berton.  It ties the history of Canadian humour to Mercer and his generation of still-existing, Canadian personalities who still care, help define our country today, and persist in doing it proudly branded as humorists.
Click for Pierre Berton Trivia

[1] Pierre Francis de Marigny Berton was born on 12 July 1920 in Whitehorse in the Yukon.  A comprehensive resource on Berton is the 2008 biography by historian A.B. McKillop, (Pierre Berton: A biography).


[2] Although Berton had started to dabble in other media by that time, he was still known primarily as a newspaper columnist, and the book draws heavily from his pieces in the Toronto Star.  He rarely drifted into humour writing again.  One exception came, however, not long after he won the Leacock Medal.  This was The Secret World of Og, which he wrote for his own children.


[3] More Swiftian humour. Complete with a “Worst Man” and the father taking back the Bride.


[4] In Just Add Water and Stir, Berton also lampoons 1950s society in “Modern Fables” that mock commercial enterprise (“The Great Detergent Premium Race,” “Goliath Tobacco’s Big Comeback,” and “The Legend of (a Las Vegas-like) Healing Mountain,” and in verse like “A Toast to (the) Woodbine (Racetrack in Toronto)” and “The Sixty-Five Days of Christmas” as well as parodies of  1950s Television shows like Perry Mason and Gunsmoke.


[5] In this book, he also celebrated the UBC student paper (The Ubyssey ­­-a  training ground for a number of  Leacock Medalists) and his work at the defunct Vancouver News-Herald.