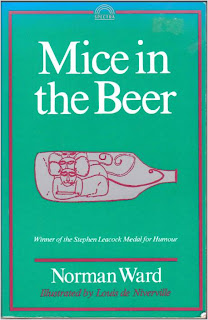 The Gentle Art of Watching Mice in Beer

Historian Jack Granatstein once said Leacock Medal winner Norman Ward’s writing was “as dry as the Prairie soil of the dust bowl years” and that his prose “sits on the page like so many cow flaps in a farmer's field.”[1]  He was, however, directing those comments at the wordiness of Ward’s scholarly work, not his humour writing.


Ward spent over four decades as a professor at the University of Saskatchewan[2] where he  sharpened his opinions but evidently felt restrained.[3]  The political scientist[4] saw gentle satire, humour not directed at a specific person and conveyed in plain talk, as a sand box.  A place to play, to be creative, and to express thoughts without sticking to the facts too much or fear of offending.


Ward, whose book Mice in the Beer won the medal in 1961, could make reviewers laugh until they cried[5] with his humourous work and his mastery of that “Gentle Art of Satire,”[6] writing  that seems mild on the surface, but hides a prickly base below the veneer.


Early in Mice in the Beer, he covers himself by stating for the record that this book is “fiction, in the sense that the events and conversations chronicled here did not happen as recorded.”  He certainly enjoyed the free space of funny fiction when mocking his university world.  In his opening piece, “A Meeting of Minds,” Ward explains to a passing workman that musing over an academic article with eyes closed, sitting under a tree is work for a university professor.


“When I write articles, my wife calls it loafing,” said the man.


But Ward is commended: “For a fellow who never does anything but read books ... you seem to know a lot.”


Gentle, but making a point.  This style of humour flows out of the low-key  prairie voice[7] that Ward says adorns “conversation with homely asides and earthy aphorisms,” is expressed in simple declarative sentences, and enlivened only by references to farm concerns like “bloat, heaves, and various other murrains that disturb our animal friends from time to time.”


The prairie perspective is not easily impressed and looks at “the banking belts of Toronto and Montreal” and my town of Ottawa with skepticism.  Ward proposes that the winners of federal elections stay home in Saskatchewan because the “losers, being demonstrably less smart than their victorious opponents, could probably be allowed to take their places in Ottawa without damage to the public weal.”  Ward explained that “an Ottawa terrier—(is) a descriptive phrase that must be taken as signifying not a special breed of dog, but a cynical frame of mind” and linked it to alcohol. “Half the business and political history of this country could be told in terms of its alcoholic content,” says a politician in the book.

With this, I squirmed and assumed Ward would suggest that the “Mice” here in Ottawa were the culprits drinking up the nation’s beer. But the rodent reference in his title is not targeted in this way.  A bottle-collector tells Ward that mice crawl into empties, “attracted by the malty smell.” The mice lap up drops, spin around, and expire. Ward loves the intoxicated mouse story because anything that can discredit animals “should be widely publicized, so as to make man seem a little better by comparison.” 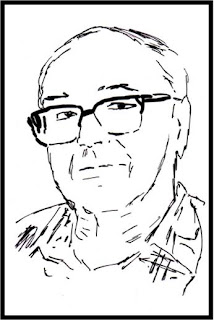 He thinks humans need all the help they can get.  His book not only pokes at politicians, Ottawa bureaucrats, and Eastern bankers, but also bird watchers and teachers, pig farmers and cowboys, students and cemetery salesmen, and, persistently, people like Ward himself. By the end, you realize that we are all like the “Mice in the Beer.”

Canadians - we scurry around, lap up a few drops of delight, act silly, and die.  Not a particularly cheery thought, but if we can find enough drops in life, we can, like the mouse in the bottle, leave this world with a “face .. wreathed in smiles (with) ... ears ... at a rakish angle (and) ...  happy.”   Norman Ward, the serious academic, evidently found his droplets in simple language and the art of writing gentle satire.

[1] In 1969 Ward was designated as the official biographer of James G. Gardiner, former Premier of Saskatchewan.   In a newspaper review of the Gardiner Biography, Granatstein made these “cow flap” comments.


[3] Ward was a busy humour writer during the 1960s and 1970s, writing articles as well as Mice and two follow-up  books, The Fully Processed Cheese, published in 1964, and Her Majesty's Mice in 1977.  But his greatest national recognitions, including election to the Royal Society of Canada, came for his work as a political science and economics researcher. Ward’s Order of Canada only cited his services as an economist and political scientist.


[4] One of Norman Ward’s books, the fourth edition of The Government of Canada (University of Toronto Press) was the first Canadian book to be translated and published into Punjabi.


[5] Laughed until I cried is how the Globe and Mail reviewer Joan Walker described the book.


[6] The Gentle Art of Satire is an expression you don’t hear too often. Google produced just 204 immediate web references for the phrase.  We usually describe “satire” as “biting” or “bitter,” and the Internet will cough up over millions of quick hits for those expressions.


[7] Norman Ward, known as a voice of the prairies and solidly associated with Saskatchewan throughout his career, was, in fact, born and raised in Hamilton, Ontario where he attended university before earning his doctoral degree at the University of Toronto.  The only institutions to recognize him with honorary degrees were Ontario universities McMaster (1974) and Queens (1977).