She was born in 1909 and baptized Marie Rose Angéline Roy in the unflinchingly French region of Quebec known today as Saguenay-Lac-Saint- Jean.   Often regarded as the heartland of the sovereignty movement, it is far from English-speaking enclaves and was the venue for the classic Quebec novel Maria Chapdelaine, written in 1914 around the time of the childhood events retold in Truthfully Yours.
Yet Hango refers to the region by the Anglicization “Lake St. John” – possibly as an inside joke and a self-mocking insinuation of the pretensions and masquerades she is about to confess.

She first distributed the manuscript for Truthfully Yours under the pseudonym Angéline Bleuets meaning  Angéline Blueberries –a reference to the pejorative nickname for the natives of  Lac-Saint-Jean.  Another personal joke hinted at in the pages of her book where she notes that  “people born in that region are called des bleuets.”

Given the personal and unflattering nature of much of her story, it is not surprising that she would initially prefer a pseudonym, and this is consistent with the text of her book which never  reveals any of the main characters names.  They are identified with generic “Papa,” “Maman,” and my sister.

Despite the difficult circumstances it describes, a word count suggests that


The  Angéline Bleuets pseudonym was name under which she won the $500 Oxford-Crowell Award for her manuscript, setting the stage for its later 1948 publication by Oxford Press.  By the time that book cover was being type-set, she had been convinced to go public under her married name Hango. 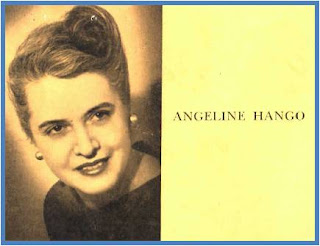 Marie Angéline Rose Roy had married John Raymond Hango in 1932 in a ceremony in the author`s home town of Arvida. The groom picked up his unusual last name from inventive immigration officials in the United States where he landed from Finland with the family name Heino.

The Hangos settled in big, cosmopolitan Montreal and had started a family by the time Truthfully Yours was published. They lived in the Montreal region for the rest of their lives.  There, she would be known and die simply as Rose Hango.

In early 1970 at events related to the centennial of Stephen Leacock’s birth, Hango confirmed that writing Truthfully Yours had been a unique undertaking, and she had not written another book and had been happy to devote herself to her family and other interests.   Hango added, however, that she might write again in old age.

It was not to be.  She lived to the age of ninety (passing away in 1995), but died as the author of a singular work.


What Happened to Hango ?