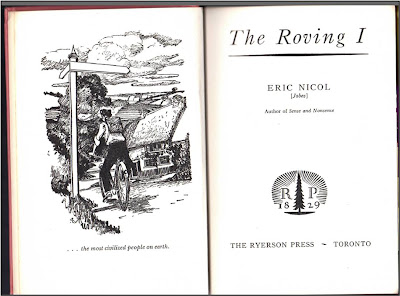 “As a teen in 1960s Ontario, I fantasized that some heavenly intervention might allow me to pass high school French so I could go off to Paris and hang out with someone who might be named Collette, Michèle, or something like that. Ernest Hemingway’s death, image, and aftermath loomed large in pop culture and in young male minds at that time.

He told us, ‘If you’re lucky enough to have lived in Paris as a young man, then wherever you go for the rest of your life, it stays with you,’ adding that celebrated comment: ‘for Paris is a moveable feast’…”


In my book on the Leacock Medal, I opened the review of the 1951 winner with a personal reference to the somewhat obvious links between Hemingway and Paris and young male imaginings. I couldn’t help it.


Eric Nicol’s book The Roving I, the first of three to win the Leacock Medal for him,
tells of ordinary things: a visit to the library, a ride on a train, and a walk through city streets. There’s not much interaction with other people. Yet the book holds your interest because those streets run through Paris, and the train takes you across the French countryside. Nicol wrote the book during his time as a graduate student at the Sorbonne in the late 1940s. He assembled The Roving I as a travel narrative aimed at a Canadian audience, drawing it from the columns that helped pay his expenses abroad. Eric Nicol’s later books also repackaged newspaper columns, but those collections often lacked any unifying theme. The Roving I had the story-like framework of his year in Paris, and this makes it an easier read.

The tone of the book and many of its observations may seem quaint in an Internet world. Yet some passages could have been written yesterday, and pretty much all of it remains funny. This is because Nicol describes the walks through the streets of the everyday with weird words and silly detail--as he did on his day at the bibliothèque: “A little man saved from midgetdom only by his bowler. With hands resting on his behind, he fluffs out the wings of his swallowtail coat (circa 1885), like a nervous blowfly.”


The book, like all of Nicol’s work, is fun and funny, but I found this one intriguing because it was clear that as much as he liked Parisian life, the City of Light was not destined to be his Moveable Feast.
For him, it was and would always be Vancouver.

The book gives readers a chance to reflect on their own touchstone, early life experiences and how they have framed all that has followed.

For More: What’s So Funny?
Lessons from Canada’s Leacock Medal for Humour Writing

Nicol and His Brush with Me