1975 A Good Place to Come From by Morley Torgov 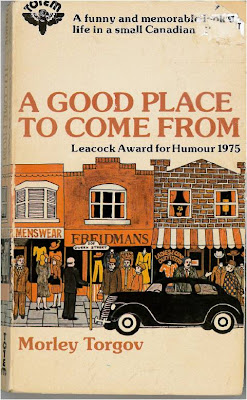 A Good Book to Learn From

For a long time, I reconciled meager book sales with typical writer’s rationalizations: “Well, it made me feel good, I got something out of my system, and my colleagues laughed.”[i]  Then, a friend pointed out that I could achieve the same effect with a lot less effort by breaking wind during a staff meeting.  So, I admit it.  I would like to reach beyond my little circle and touch a larger audience with my writing.


As to how to do that, the answer may lie in the descriptive narration of Morley Torgov’s A Good Place to Come From, the 1975 Leacock Medal winner.


Torgov’s book recounts his adolescent life in the tiny Jewish community in Sault Ste. Marie, Ontario in the 1930s and early 1940s.  He and I would be vying for the same spot on the worstsellers list if he had written his book with only his friends and neighbours in mind.


But Torgov invites the rest of the world into his experience by focusing on common concerns like the centerpiece father-son relationship and by describing the Jewish cultural context in just enough, but not too much detail for the purpose.


“Not ghetto Jews,” Torgov says, adding however that the Soo Jews were always “scratching, scraping, building up, tearing down, conniving and surviving.” His father, an immigrant who fled the Russian army in 1917, set up his clothing store in Northern Ontario hoping to supply steel workers.


In narrative description, it’s not enough to be skilled in finding words. Writers need to sense when to stop using them as well. It’s a talent that likely requires hard work to sustain though Morley Torgov seemed to have a natural sense of what we needed to know and how to omit needless words.


Yet, sometimes, the situation does warrant a lot of words.  On his battle with his father over a career, Torgov carefully describes the veneration of two New York Yiddish-language newspapers, Forward and The Day.  Torgov’s father reads and rereads articles on “filial disloyalty,” parental suffering, and finally pride when a son graduates in “medicine !” [ii]


Texture and detail play a big role in the story on “The Making of a President 1944,” a failed attempt to recruit a President of the Jewish community group.  Not much of an event in itself.  But funny because Torgov devotes many pages to the challenge of filling the thankless role. “A leader could rarely delegate authority simply because his peers were seldom—if ever—in a mood to take orders... The budget made generous allowances for nothing.”


Torgov’s father had two wives, endured two flawed relationships, and became a widower twice.  The book only mentions the death of Torgov’s mother briefly but it gives a lot of space to his stepmother possibly because this relationship best illustrates his father’s plight or maybe because Torgov felt less pain in exploring it.  Sometimes omitted words speak more loudly than description. [iii] 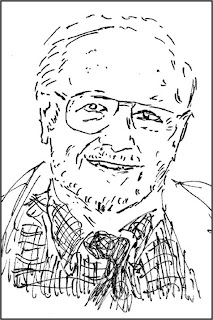 In the story of the first purpose-built Sault Ste. Marie Synagogue, Torgov gives a blow-by-blow account of the building design, funding, and construction as a build up to literal blows and a great embarrassment for his father. The story merits the descriptive detail because it comes to define the relationship between father and son.


A Good Place is really one great effort to understand and share that relationship.  Yet with the death of Torgov senior, the author admits that he cannot understand everything about his father, but that he can celebrate his memory and this may be enough.  In doing this, he helps us understand - a bit more about the Jewish life in Canada, the Depression, World War II, and how and when to use words, omit words, and share personal experience in a way others can enjoy and in a way that might help them buy your books.

[i] The comment was made in relation to my satire that puts Don Quixote in a government office.
[ii] Although Torgov had entered journalism as a Sault Daily Star cub reporter at sixteen and would be a writer for the rest of his life, he had also established himself firmly as a Toronto corporate lawyer by the time this, his first book, was written.  As I typed this, he is still writing and lawyering at eighty-five years of age (2013).
[iii] Torgov’s writing suggests that a general rule is that description should be proportionate to importance, but also, that like all rules, its fracture can be more interesting than its integrity.