A Love is a Long Shot by Ted Allan 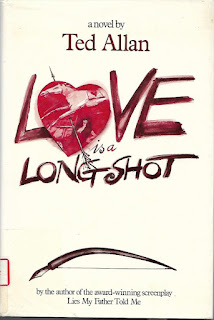 The book is  a Novella that follows Davie, a teenager in 1930s Montreal, as he passes into adulthood while working at a cigar store that fronts a bookmaking operation.   He gets the job because his uncle tells the owner his nephew is “absent-minded” and “lazy” and would not interfere with the criminal activities  at the store.  At the end of the book, a horse named “Love,” a long shot, wins a race and pays big and this sets the stage for the rest of Davie’s life, which is hinted at in the book.

Ted Allan was a screenwriter, playwright, and poet, as well as that author of many books made into TV films and motion pictures.  A friend of Norman Bethune whom he met in the Spanish Civil War – Allan succeeded in producing a film on Bethune’s life a few years before he – Ted Allen – passed away. He received many accolades and awards including a Golden Globe and an Academy Award nomination for his film Lies My Father Told me. 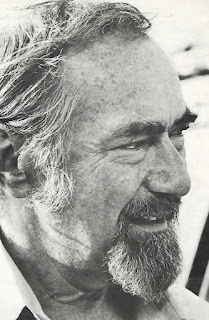 But there might be a case for suggesting he did not deserve the Leacock Medal.  This was proposed by literary historian and writer Brian Busby in his book The Dusty Bookcase.  Brian is a reviewer and author who has written extensively about little known works of Canadian literature and books long forgotten.  This podcast features an interview with Brian about the background to Love is a Long Shot, Ted Allan, and his Leacock award

Well, my understanding about the award is that there are fairly stringent rules about material that's been used before. And I'll leave that up to Dec because I don't have that information in front of me.

Well, I did check out the Leacock Medal rules in anticipation of our conversation. And they do say that books are not eligible, “if significant or substantial parts have been previously published in book form.” But from reading your book, Brian, I gather that that's only part of what interests you about this particular Leacock Medal winning book ?

To me, it's the most fascinating winner. And I say this because it is a re-writing of an earlier book with exactly the same title – Love is a Long Shot. It was published in 1949 as a kind of pulp paperback by a firm called News Stand Library, which was very fly-by-night. They lasted about two years before literally going up in smoke. There was probably some organized crime behind it and all sorts of other things going on with News Stand.

But it was part of that paperback boom that gave rise to Harlequin, for example, which began not as a romance paperback publisher, specifically, but published everything.

And News Stand Library was a very, very poor cousin with very, very poor production values. So in 1949, we have this book, Love is a Long Shot that came out by Alice Doherty, I'm hesitating slightly, because if you look on the spine, the title page, the back cover, there are various middle initials and things like that, that keep changing for Alice Doherty, which is typical of News Stand Library’s sloppy production values. Anyway, this this book concerns a girl that comes from Montreal to work at her uncle's cigar store.

I guess we should clarify that Alice Dorothy is really Ted Allen, a pseudonym he used for this first version of love as long shot.

That's right. Yeah. So the main character comes to work at her uncle’s cigar store in Montreal, and the store was really a front for a bookie joint. Then she's surrounded by organized crime as a result. And it's a very, very dark book, which is not to suggest there aren't elements of black humor in it.

But it's got some of the most disturbing scenes I've ever seen in the Canadian novel. And one of them is captured on the front of 1949 version, which is basically a sexual assault that takes place between you know, involves a criminal and the main character. So it's very, very dark book. Well, Alan took that and then later did various things with it. For example, there was a made for TV movie called Love on the Nose. It's made in the 70s with Saul Rubinek and Al Waxman that's less dark. I really liked it.

In that one, the main character is someone who finds himself in a very similar situation, but it's now the main character, the protagonist is male instead of female. And then, of course, you get the 85 winner, Love is a Long Shot, which is light – I compared it to a bit of a Guys and Dolls treatment of organized crime and roguish guys. I mean, some of them are bad, but some of them are lovable crooks.

So it's interesting how he not only envisioned this as a story with a female protagonist in the first version, and then turned it into something built around a young boy, presumably modelled on himself, but also changed the entire tone of the experience that the book describes.

Yes, yeah. So it's fascinating in that, he took what I think of as one of the darkest and most disturbing novels and certainly, I've studied a lot of the postwar paperbacks and especially News Stand Library, mainly because one of the fascinating things is Allan wasn't alone.

Hugh Garner also wrote for News Stand Library, a book that I reprinted part of the series I have with Vehicule Press called Ricochet – Garner wrote a book called Waste No Tears. And it's also very dark. And so it's, it's, as I say, it's also disturbing, but it's interesting because Allan encouraged Garner to go to Newa Stand Library and basically said, you can earn 400 bucks, and they'll print anything, was the message and, and so Garner, in his memoir, he talks about dashing it off in about 10 weeks, or 10 days, I should say. So for $400 in 1949 was pretty good cash for 10 days work?

Well, I have a theory of sorts on why Ted Allan reworked the story. And it's tied to that notion that tragedy plus time equals humour. Maybe in the 1940s, that brush with Montreal criminals was fresh in his mind and raw, but by the 1980s, with all his successes, Ted Allan could look back with more charity on the experience. Anyway, your key point in this regard, and what you're saying is that maybe he should not have won the Leacock Medal.

Yeah, so as I say, I think it should have been disqualified. But I don't think people knew that. Alice Doherty and Ted Allan were the same, you know, these paperbacks were considered very disposable in their day.

Yeah. And of course, they didn't have the Internet and other means to research books like we have today. Regardless, it's interesting how it turned out one means to milk that story in various forms and, and successfully.

Yeah, and, you know, Love on the Nose, I was really privileged to see the film, which are they make for TV movie, which I'd always wanted to see it, last year was shown at the Toronto Jewish Film Festival. And the writer credited is John Smith, not Ted Allan. And according to the Allan family, he did that because he had a script for the film, and he really wanted Hollywood to do it. Never was sadly but the Rubinek-Waxman made for TV movie is really fantastic.

Yeah, I'm gonna have to find a way to see that TV film myself someday. Given his commitment to this basic story, however, he spun it and transformed it and formats, you have to assume that this cigar store must have existed in some way, and must have been some part of Ted Allen's forming life experience.

So you can roll up your sleeves without having to take off your cufflinks. That  sort of thing. So I find that really interesting, and he was an absolutely fascinating character. I think it's unfortunate, but that book’s out of print, even though I didn't like it all that much, I admire him as a writer and I find it fascinating that you know, even though it won the Leacock award, as far as I know, it just had one printing as a hardcover and that was the end.