1990 According to Jake and the Kid by W.O. Mitchell 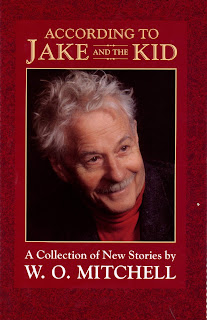 “I saw him crying often--he’d get so homesick,” my mother once said, recalling her family’s 1930s hired man. “A boy forced out of his own home--he came to our farm from England.”
My father, who worked as a teenage hired man on the Prairies, also lived the experience more as a “boy” than a man. But he had a different perspective. He saw the job as an adventure and loved it. My parents’ hired-man stories framed my own thoughts of leaving home with the balance that comes from two points of view.
They also gave me an image that conflicted with the steady older man in W.O. Mitchell’s first Leacock Medal book, Jake and the Kid. Their recollections align better with Mitchell’s 1990 medal winner, which had a slightly different take on Jake.
Like the first book, According to Jake and the Kid explores the hired man’s bond with a boy on a prairie farm. Jake’s worldliness comforts the Kid, and his skill with animals and machinery helps the boy’s mother manage the farm after her husband joins the fighting in World War II.
In the first book, CBC radio hooks the boy up with his father for a conversation that the Kid calls “the best Christmas present Ma and me ever got.” The second book opens with, “my dad got killed just a week after we talked to him . . . Maybe I haven’t got a father any more, but I got Jake.”
Jake now seems, despite his years, less like a father, though, and more like an older brother,
playing games and getting into trouble. As Mitchell explains, “most hired men seemed to have one foot in the adult world and the other in the boy’s world.”
This book makes the boy within the hired man clearer because it features a few stories told 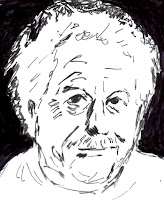 by Jake himself. The Kid was the sole narrator in Jake and the Kid, and because Mitchell drew Jake from his own recollections, the picture of a big older man reflected “the low vantage point of a boy.”
Mitchell, the teacher and university lecturer, surely told countless students, “That’s a good story, now rewrite it from the perspective of another character,” and he may have been using the exercise to breathe fresh air into his own work.
But this takes skill if you want to maintain a tone while viewing events from different angles.
When the Kid talks, Jake becomes a wise counsellor, and the stories are told with young-boy references: the colour of the little colt is like “pull taffy,” and two fighting roosters remind the Kid of “those toys you wind.” When Jake tells a story, he’s a guy who goofs around with friends and compares things to barn doors, trucks, and combines. Jake takes the Kid goose hunting against Ma’s orders, and he and his rummy-playing friend Gate sound like bickering children when a storm forces them to spend days together.
Yet the chapters, whether from the perspective of the Kid or that of Jake, all share the same feel, and readers recognized them simply as “Jake and the Kid” stories. The consistency comes in part from the farm, the town of Crocus, and the locals[1] common to all stories. But another reason they all have the same feel comes from the core personality. Whether the stories are told by the boy or the man, the central character really rests in the transition between the two. The Kid inches toward it, and Jake reaches back.
That was the space and perspective occupied by others, like Huckleberry Finn, Oliver Twist, and the hired men of my parents’ memories, who helped me make sense of the world when I was the Kid.
From time to time, I can still use a little support and inspiration to figure things out and to transition to something new.
Maybe I haven’t got a Jake, my parents, or the others that surrounded me as a Kid--but I got this book.
Writing Exercise
Describe a 1990 writing class taught by W.O. Mitchell from the perspective of a student. Then describe it from the perspective of W.O. Mitchell.

[1] Characters in the Jake stories include the town barber, Repeat Golightly, Old Man Sherry, and the teacher Miss Henchbaw, as well as visitors like the poetess Belva Taskey, the hypnotist The Great Doctor Suhzee, and a medicine man, Professor Noble Winesinger. One story recounts the drive by female curlers for equality. A story cited often by reviewers, “The Face is Familiar,” features a slander suit against the editor of the newspaper, who compared a local with a goat. The goat is brought to court as evidence.