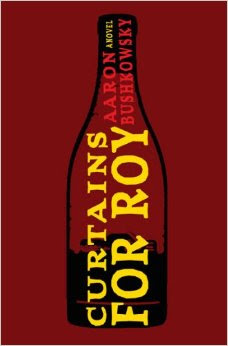 Maybe they could shoot the back of his head

or just his eyes.

Or focus on his butt or the faces of other people.


I’m talking to myself here and trying to figure out how you could make a movie based on the novel Curtains for Roy.  The book, a finalist for the 2015 Leacock Medal for Humour, could be easily developed as a smarter, northern version of Sideways.  Roy has all the elements of a good movie: a road-trip-style adventure with a dying buddy, sexual tension and sexual characters, a venue for great visuals, menacing forest fires and biker gangs, and lubricated dialogue that sounds intense, but authentic.  Oh yeah, and some Shakespeare and a bit of Zen.


This kind of stuff makes good fodder for a screenplay.  But I liked the book because of a feature that is hard to imagine on film: the punctuation.


The author, creative-and-successful-by-most-Canadian-standards playwright Aaron Bushkowsky, doesn’t use quotation marks, and this means you are constantly dared to decide who is talking, whether the text is dialogue or narration, and, most often, whether you are reading thoughts or the “outside voice” of spoken words.  To maintain this effect, a moviemaker might have to shoot the protagonist Alex from behind when he speaks or point the camera at other bodies or body parts. 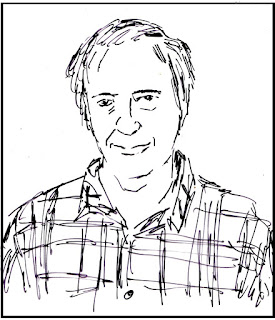 The absence of quotations may sound frustrating, but I found it fun.  It feels like a game, and the technique puts you inside Alex’s body more than a standard narrative style would.  Curtains for Roy also pours out like a stream of consciousness and tells its story in real-time, present tense.  The combination pulls you along through the adventure while challenging you at every quotation-less page.


The story circles around an effort to stage Shakespeare’s A Midsummer Night’s Dream in an outdoor theatre near Kelowna.


The narrator Alex, a playwright who has more than a little in common with the author, flees Vancouver, a failed relationship, and the sting of bad reviews. His plays are said to lack soul.  He heads to the Okanagan to get away, to take another stab at writing amid the flowing red wine, and to support Roy, the named director of the Bard in the Vineyard project and a lung cancer victim with months to live.


I like the story a lot.  It has a thoughtfulness as well as action and humour that, in combination, have a unique feel.  But as someone who has reviewed all of the Leacock Medal winners, I am hardwired by the framework of those old books and always see echoes of them in any Canadian humour I read.

Several of the past winners came to mind as I read Roy.  Most of the references made sense immediately.   The actors, writers, the hovering death, and mix of delusion and reality recalled Richler’s Barney’s Version; the authenticity of the F-filled inside and outside voices of the narrator made me think about the 1950 war-story winner Turvey; and the “Drink. Swirl. Drink. Drink. Swirl.” of wine reminded me of the booze that buoyed Farley Mowat’s Boat Who Wouldn’t Float.


Oddly, however, the Leacock Medal book that came to mind most often was the first one, Ojibway Melody, the folksy, simple celebration of 1940’s summers at the cottage.  This surprised me because when I first read the stream-of-consciousness, real-time musings in Ojibway, I thought it was quaint, unsophisticated, and even a little amateurish.  But Bushkowsky’s words immediately struck me as clever,edgy, and innovative.


I’m not exactly sure why, but my best guess lies in my own life experience and my easy associations with thoughts of the Okanagan and Vancouver as well as an admiration for creative word combinations, metaphors, and thoughts.  Earlier this year, Bushkowsky told an interviewer that he wrote his humour book with one different, dominating thought: "Don’t try to be funny."   If that’s true, I can probably learn something from studying his style and have maybe been overthinking this Canadian humour writing thing.


So, I am re-reading Ojibway Melody through a different lens and am adding Curtains for Roy to the list of books that I intend to rip off someday.


Hey, did I say that with my outside voice ?

Write a conversation of about 600 words between three drunk brothers fighting about a girl - without attributing any of the quotes.
DBD
May 2015
Newer Post Older Post Home