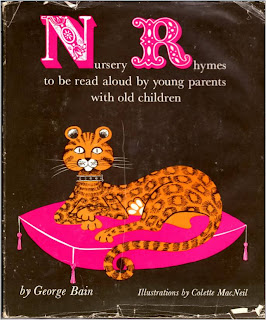 If you ripped every second page out of George Bain’s Nursery rhymes to be read aloud by young parents with old children, you’d have a book that could sit on the shelf between Dr. Seuss and Winnie-the-Pooh.  Every second page of the 1966 Leacock medal winner speaks in a fun, three-to-eight-year-old-kid way.


Yet whole and intact, Bain’s book belongs on the hard to reach shelves alongside works of literature.


Colourful illustrations and verse laid out in the abecedarium - A is for ape, B is for beaver - style for kids fill half the book.  But each of these pages sits opposites one of prose, biological information, and facts about the animal.


Bain, a respected journalist,[i] proposed the two-pronged format under the premise that young parents needed ammunition to beat back inquisitive children.  Children who, upon hearing funny verses, react with “persistent whys, whens, and hows.”


You can learn a lot - from tidbits like the scientific names of fish to the answer as to whether a zebra is a white animal with black stripes or a marked black animal.  On the letter-G animal, the Gnu, we learn of the “Brindled Gnu” and that there never was a “zoologist named Watt” and no sub-species “known as Watt’s Gnu.” Useful stuff when dealing with kids. 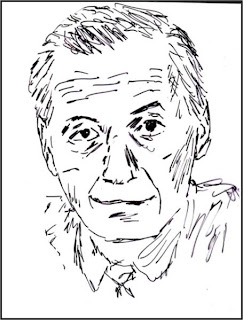 The two sides of the book feed off each other, making the whole more than the sum of a kid’s book and a bunch of facts and a reminder of the power that lies in  mixing genres.   Like other Leacock medal books, a mix elevates simple content with an incongruous context.  But unlike the others, Nursery Rhymes would not have succeeded with words alone.  The drawings of animals and ornate lettering gave made the parody work. The Leacock  Medal awarders could have justly split the medal between illustrator Colette MacNeil and Bain.


Nevertheless, Bain[ii] deserves full credit for an innovative concept that spoke to the times.  His book reflects the backend of the baby boom when those babies were becoming children, homes were being built, and family concerns were ascending.  Many parents needed a laugh.  I wish I had the book when my kids were little.


Although my copy is fragile and the dust jacket is tattered, I may lend it to some parents to see if mental gymnastics remain part of the practice of reading to kids today.  In any case, I’m pretty sure that young parents can still use a laugh and that double-edged humour still works.


[i] George Bain (1920 - 2006) wrote elegant newspaper columns.  But his most celebrated act was to use the F... word in print.   In 1968 when Prime Minister Pierre Trudeau swore at an opposition member in the House of Commons, most of the media merely reported that Trudeau used an obscenity or quoted the Prime Minister as saying the words were “fuddle duddle.”  Bain set the record straight, using the notorious four letters in sequence for the first time in a major Canadian publication (Globe and Mail).
[ii] Although known primarily as a political journalist, George Bain did not restrict his humour to side projects like his Leacock Medal Book. He injected humour into his regular columns and wrote mock newspaper reports, like his pretend Letters from Lilac, Saskatchewan.   Bain authored other books of humour including I've Been Around and Around and Around, Letters from Lilac, Champagne is for Breakfast, and Gotcha.