The Story of My Copy of Sarah Binks 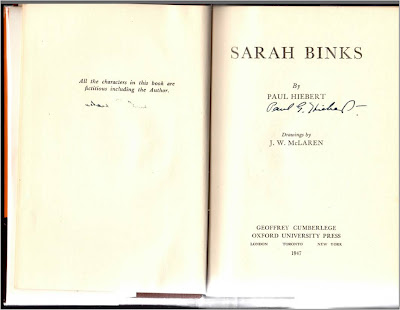 I own a first-edition, first-printing, 1947 copy of Sarah Binks signed by Paul Hiebert.  I bought it, appropriately, from a bookstore in Winnipeg (Burton Lysecki Books on Osborne Street), the city where Paul Hiebert spent so much of his life and career.  The nice people  who shipped Sarah to me said that they had had their Sarah Binks in the shop for a number of years and would miss it.
“It's been like an old friend on the shelf,” the woman told me. “It’s fun to speculate (about its history) - we do it all the time.”
I said I would take good care of her.
Two names in the front of the book offered a clue to its history, but I didn't hold out much hope and didn't think to look at the names for a long time.
But when I did, I Googled and cross referenced the names, “Don and Helen Penner,” and here is what I found - on newspaper, university, and other institutional web sources.  The following is from this public information. 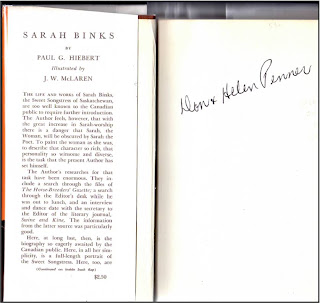 In the late 1940s, at the time that Sarah Binks was published and Paul Hiebert was working at the University of Manitoba, a medical doctor in Winnipeg named Donald W. Penner worked as a part-time prof at the university.  Penner was destined to become one of “Canada’s foremost pathologists and a pioneer in blood alcohol research, whose work would eventually lead to stricter national laws.”
Today, the University of Manitoba lists him, Penner, among its most distinguished graduates.  In fact, he was celebrated while still a student for developing and operating Manitoba’s first blood bank. As an intern, Penner founded Canada’s first lab service for measuring blood-alcohol levels in emergency-room patients, and he introduced the first “Pap” smear test for cancer detection, as well as fine-needle cytology diagnosis, in Manitoba.  In addition to his research, his work in medicine, and contributions to health care, Penner found time to serve almost thirty years as a school board trustee in Manitoba. The Dr. D.W. Penner School in south Winnipeg is named in his honour.

The other name written into the front of my book is “Helen” and Dr. D.W. Penner was indeed married to a woman named Helen, who collaborated with him in many of his projects.  Among  other things, she played a key role in designing and operating the quality assurance and control program for the College of American Pathologists. In 1988, in their seventies, Don and Helen moved to Africa where Dr. Penner worked as a hospital pathologist, and the couple helped form a professional association along with medical training and recruitment programs in Kenya. They did not return to Winnipeg for ten years, both past the age of 80.
Penner was secretary-treasurer of the Canadian Association of Pathologists for 25 years, and the association established an annual prize in his name. He also received the Canadian Medical Association’s highest honour, the F.N.G. Starr Award, and he was a Member of the Order of Canada.
Helen died in January 2004.  Don passed away a few months later, presumably initiating the chain of events that put the couple’s old books into other hands and eventually one of them in mine.
I am not sure whose particular hand wrote the two names into the front of my book: Helen’s, Don’s, or Heibert's, but I cherish my Sarah Binks more because the two Penner names are on it and now feel an amplified reason to “take good care of her.”

Paul Hiebert and the National Research Council in Ottawa