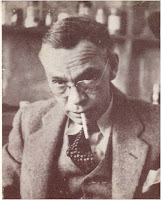 
Sarah Binks author Paul Gerhart Hiebert was born in 1892 in Pilot Mound, an oddly named, small town near the U.S. border in southern Manitoba.  (It sits on slopes that can be seen from a distance and helped pilot 19th century wagon trains across the prairies).
Although he would eventually establish himself in the field of science, his early life was dominated by an interest in the arts, letters, and humanities.  He earned a B.A. in philosophy from the University of Manitoba in 1916 and went on to study the arcane literary field of Gothic and Teutonic philology, ultimately earning an M.A. at the University of Toronto before he shifted gears, moved to Montreal’s McGill University, and began his career in chemistry.
There at McGill, he received a Master’s of Science in 1921 and a chemistry Ph.D. in 1924. Hiebert then returned to the prairies and took up a post in chemistry at the University of Manitoba where he worked until his retirement in 1953. There are many sources of biographical notes including detailed, idiosyncratic bits of information about Professor Hiebert and his best known work, Sarah Binks, on the web.  ﻿
﻿
But the one that most impresses me is the University of Saskatchewan Paul Hiebert Digital Fonds. The depth of research, quality of the multi-media interface, and coverage of all imaginable issues make reading it a humbling experience for an amateur book blogger.  It is worth scanning for many reasons, particularly for the information on the book’s reception and publication history.
One of the reasons, I personally like this website is the thought that a Saskatchewan institution would go to these lengths to commemorate a book that did not put the Province in a great light and was not even written there.   It is also cool that Hiebert deigned to send some of his archival material the UofS.  I think it speaks well of the University and, of course, the professor’s enduring sense of humour.
Here is the link to Hiebert’s modest letter committing his personal material to the University.
Despite this material and all of the other information on Hiebert and Sarah Binks on the web already, I am able to make my own humble contributions the pile of what is referred to as “Binksiana.”

1) Paul Hiebert and the National Research Council in Ottawa
I was delighted to learn of Hiebert's link to the NRC (click above to learn about it).
2) The Story of My Copy of Sarah Binks
I am the proud owner of a first-edition, first-printing 1947 copy of Sarah Binks signed by Paul Hiebert. (Click for the cool story of this copy of the book).
3) Sarah Binks and E. Pauline Johnson

Finally, I would like to enlarge the quantity if not the quality of the national “Binksiana” storehouse by gratuitously speculating that Sarah Binks was, at least, in part inspired by E. Pauline Johnson (click above for more).