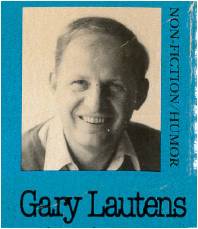 When I moved back east from Vancouver in the early 1980s, my withdrawal from regular reading of Eric Nicol was soothed by discovery of the Toronto Star’s Lautens.

I recognized this Toronto guy as among the superior ranks of humorists in Canadian journalism.  It was right around the time that he won his first Leacock Medal for Humour for Take My Family ... Please!


Lautens was well established as both a journalist and humorist by the time I discovered him, and with his children well into their teens and grown, his writing was becoming less family oriented than it had been when the Take My Family stuff was written.

This early 1980s non-kid orientation was helpful in grabbing my then childless, twenty-something attention.
Although Gary Lautens was born in Thunder Bay, Ontario (then Fort William) on November 3, 1929, he was raised in Hamilton.  He graduated with a Bachelor’s degree from McMaster in 1950 and immediately joined the local daily, the Hamilton Spectator, where he eventually established himself as a popular sports columnist.
He married his wife, an almost beauty queen, Jackie in 1957. As described in his book Take My Family... Please, the couple had three children.


Lautens joined the Toronto Star in December 1962.   Pierre Berton had just left the Star and had been the paper’s high profile columnist to that point.  At the Star, Lautens moved from sports to human interest columns.   His career included stints as a writer and periodic reporter for TV and a two-year term as Executive Managing Editor of the Star from 1982 to 1984.
From 1985 until his unexpected 1992 death from a heart attack at 63, he wrote humour columns again - at times being the most widely read columnist in Canada.
Gary's columnist, lawyer, humorist son Stephen's take on his Dad.