With this Blog post, I am claiming the 1959 Leacock Memorial Medal for Humour - post-humorously.

Although only five years old at the time, I was responsible for the best work of printed Canadian humour in the year previous.
﻿﻿
My Canadian citizenship was firmly established and verifiable; the only barrier to my having received the award in 1959 was a weekly allowance insufficient for postage.  I know my work to have been the funniest creation of the year and many years before and  after because my parents, their friends, and my extended family told me so - something like several thousand times – per day – for something like - oh, say - my whole life !!﻿
﻿
﻿

Even casual scanners of the Leacock Medal winner website  will have noticed a glowering incongruity amidst the listed literary greats and lesser knowns.

It is the name of no one.

It was not wartime and the economy was booming so website readers are left to speculate as to what momentous event might have prompted the Leacock Associates to cancel their annual banquet and keep the medal on the shelf that year. 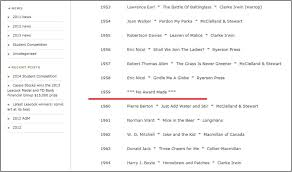 · Maybe,
in 1959, the Associates feared that any humorous literature selected would compare unfavourably with the newly released Apprenticeship of Duddy Kravitz.

· Maybe,
they thought no creative work could compare for humour and irony to the Avro Arrow cancellation earlier in 1959.


All plausible, imaginary explanations of the “No-Award-Made” event. Some Mariposa memories blame it on a transition to a new judging system and others believe that the Awards Committee decided no entry was worthy.

But the truth is more disturbing. According to media reports from the time, the answer lies in the depressing fact that “no entries were received.” The literary world bemoaned the lack of promotion and awareness of the award. 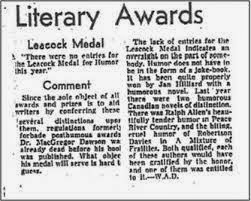 I don’t blame the Leacock Associates and the managers of the 1959 award program in Orillia. I blame those who failed to make submissions - the authors, their publishers, and especially - my parents!
In addition to my work, there were a number of books published that could easily have assumed a place in the prize pantheon had they been submitted for consideration.
In the previous year, 1958, for example, Robertson Davies released A Mixture of Frailties, the third novel in his Salterton Trilogy, and the follow up to Leaven of Malice, the novel that brought Davies the Leacock Medal in 1955. Surely, even the absent-minded Davies, let alone his motivated publisher and its publicity department, should have been aware of the Leacock Medal opportunity.
Another damnable oversight was the failure to submit Peace River Country by Ralph Allen, a book widely lauded for its Leacock-like tenderness and humour. Allen was, among other things, Editor of Maclean’s Magazine, a publication that was then known for its interest in Canadian literature and its awards and recognitions.  Why did he not enter his book ?
Regardless, neither of these works nor any others I can imagine would have matched my  celebrated contribution to Canadian letters – particularly, the letter “F.”
The work was my 1958 Kindergarten Report Card.

It is a mix of pathos and comedy that stills moves me fifty-five years later.
As a literary creation, it seems to have withstood the test of time well.    Most readers today still find amusement in its opening passages.

“Co-operates with his teacher – F”

“Works to level of his ability – F”

“Muscular Co-ordination – F”
While the young humorist did manage acceptable ratings in the never-to-be-undervalued qualities of "Punctuality" and "Personal Cleanliness," his major failings  overshadowed the positive - as elaborated in the following quotation from the prescient Miss Joblin:

“I think Richard’s lack in co-operation is due mainly to lack in attention. His little mind seems completely occupied with his own ideas ... Ricky seldom completes his work ... He is quite a conversationalist...”
Quality humour in the eyes of my family, but only indirectly attributable to the presumed, post-humorous 1959 Leacock Medal winning work.

The truly meritorious element came when the 1958, five-year-old me put pen to paper and added the ultimate stroke – a careful, cursive forgery of a parental signature. 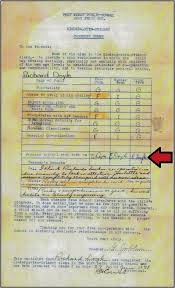 In my defense, I note that it was not really a forgery. I merely signed my surname and first initial to the line reserved for “Parent's initial,” confirming that the Report Card had been duly delivered and read. Eventually, the soiled report did reach my parents.
“What were you trying to do ? Who did you think you were going to fool?”
I was asked such questions that day and many days after as the story of the ignominious Report Card and counterfeiter kid was told and retold amidst chortling and chuckling. 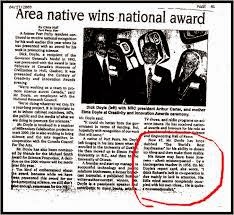 Once, about a decade ago, my mother shared a copy of the Report Card with the local  newspaper The Port Perry Star, which cited “the little mind” excerpt in reporting on a national award for creativity.

Now that I think about it, maybe I will arrange to pick up my “No Award” award in a non-event at some undisclosed no-award time and place.