The Mortar and the Mosque 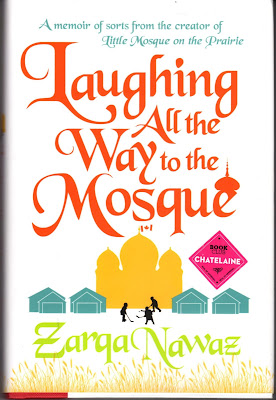 Here’s a challenge for Canadian writers: “We need a new metaphor for our country.”


This seemed to be the consensus at the opening of the Contesting Canada's Future conference in Peterborough last week (May 21-23, 2015). None of the old concepts – “the cultural mosaic,”  “the two solitudes,”  “the frosty salad bowl,” “not-a-melting-pot,” “the fur trade folks,” “people living on land stolen from aboriginal people” - seem all that useful in today’s Canada.


This philosophical discussion spun around my head as I headed back to the Best Western on Lansdowne Street that night, flopped down on the bed, and picked up where I left off reading Laughing All the Way to the Mosque by journalist and screenwriter Zarqa Nawaz.   The book stands out on the 2015 Leacock Medal shortlist as the work of a woman humorist, a story rooted in the Prairies, and a window on a particular element of our hard to describe society.  It kind of speaks to the need for a new national metaphor too. 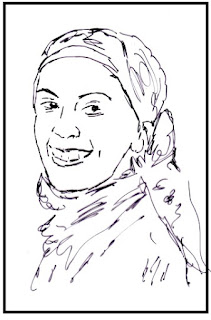 In the book, Nawaz, the creator of the successful CBC series Little Mosque on the Prairie, shares her life through vignettes that rely heavily on dialogue and have the feel of a TV sitcom at times.  Laughing All the Way to the Mosque does what viewers of the TV show might expect.  It documents in a cheerful way the incongruous circumstance of a girl growing up in the Canadian west as the protected product of Pakistani immigrant parents.  The stress of hairy legs in gym class, the allure of tight jeans at Muslim summer camp, the adventure of talking to boys, and teenage rebellion (albeit by being more conservative than her parents) could fit into TV.


Laughing also covers subjects like “ass washing,” clips and weights to restore the foreskin of circumcised penises, sex rules around the pilgrimage to Mecca, and references to “white people” ways that do not normally make it onto the little screen.   This, of course, all adds to authenticity and avenues to connect with Zarqa’s experience.


But these stories amount to something special because they go beyond the Muslim in Canada fish-out-of-water formula.   They almost equally tell, with charity and humour, the experience of a Westernized, moderate Canadian in the Muslim world.   Her reaction to the Halal butcher’s mix of prayer mats, trinkets, and Frankenstein cow parts could have come from the mouth and mind of any Canadian, and her naiveté in facing conservative backlash to the Little Mosque series comes across as the perspective of someone with one foot in and one foot outside each community.


When she makes her Hajj pilgrimage to Saudi Arabia, she and her husband view the spectacle as people from the Canadian prairies and are comfortably stationed in the camping area for Canadians.


Through this mix, Nawaz pulls us into her story and allows us to laugh along with her. We recognize how much we all have in common, and there’s something hopeful in the fact that we have a nexus point where we can share the joke.


Often, I saw passages in Laughing All the Way to the Mosque which could have come with little alteration from early Leacock Medalists like Morley Torgov’s avoidance of medical school in the tiny Jewish community in Sault Ste. Marie or Sondra Gotlieb’s pressure to choose between marriage and university in 1950s Winnipeg.   Leacock Medal winner Ian Ferguson’s  life growing up as a “white kid” on an Alberta Indian reserve, and 1948 medal winner Angéline Hango’s life as a French Quebecoise in English schools all had strong similarities, in essence, to experience mapped out in the Nawaz story.


In 1948, it is likely that French Quebec was just as clichéd and “other” as the Muslim community might feel today. (If you ever have a chance, read the jacket cover of the 1940’s Truthfully Yours and then that of Laughing All the Way to the Mosque – I’m not sure publishers and publicists do subtle humorists and affectionate memoirs a favour with hackneyed adjectives like “hilarious” and “laugh-out-loud,” but the shared spin shows how similar the presumptions about the market and context were.)


Of course, misconceptions and the interface of cultures provides great raw material for humour and, perhaps, for finding our way as a country. 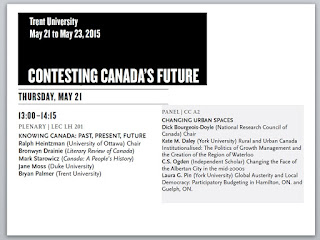 That opening session at the Peterborough conference ended with the Chair suggesting, in a joking way, that the metaphor for Canada in the 21st century should be Hegel’s description of life as “the union of union and disunion.”
A bit too theoretical for me, but I guess he meant the country consists of the things that hold us together whether there is a natural bond or not.


It’s like the spirit of Canada is the mortar between the tiles in the mosaic, not the individual tiles nor even the whole.   I think you find that mortar in people, like the Canadian race – the Métis -  that bridge different cultures and that teach the rest of us how to smile at the challenges.  People like Ian Ferguson, Angéline Hango, Morley Torgov, and now, in 2015, Zarqa Nawaz.

You are the daughter of Canadian parents living in a small village in Morocco. Write a short story describing how you successfully make friends at your new school by starting a hockey pool.
DBD
May 2015
Newer Post Older Post Home