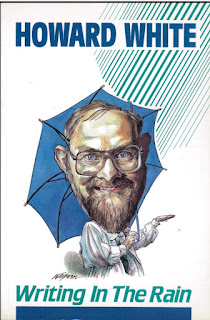 1991 Leacock Medal Winner for Writing in the Rain

For Audio of Podcast

This book presents a collection of stories that relish life on the British Columbia coast. When it comes to passion for this part of the world, it's hard to match Howard white. He has pretty much dedicated his life to saluting the province and its people.

Close to 50 years ago, after school and a few years bouncing around on bulldozers and backhoes, White settled on the coast near Pender Harbour, where he not only started a family but also gave birth to Harbour Publishing, an enterprise that in turn brought hundreds of BC authors and thousands of BC stories into the world.

The Order of Canada, the Order of BC, and many other awards have recognized White as the publisher and as the champion of BC regional history.  Writing in the Rain focuses on this subject. But it differs because this time the publisher White himself, wrote the book. It's an anthology of essays that talk of starfish, hermit crabs and otters and use terms like “Throw it out in the chuck,” “gypo loggers” and “haywire” that ride on lips of working people on the coast. The book also tells the story of a truckload of fish guts.

At what point did you decide that this collection of stories would make a book ? I presume you didn't start out collecting them with this intent because they sort of stand as individual stories.

Yeah, well, that's taking my mind back quite a while. I am a book publisher. So, I guess, I get to do what I want in terms of publishing.

I actually went into publishing to enhance my own writing career, way back in the early 70s. And it sort of was a good and bad idea.

I immediately became so busy publishing other people that I haven't really got my own writing career going the way I once dreamed of.

But I'm not complaining, I've had lots of fun, published thousands of books by other writers.

Mostly, I've been relegated to publishing small pieces of my own in magazines, giving talks, workshops, writing the odd poem, I've managed to get out three books of poetry over the years

By 1990, I was feeling a bit deprived and not having any books of my own while I was doing all these others for other people.

So, I actually got the idea (of a collection) from a Saskatchewan writer who had done a similar thing; he'd gathered together a lot of short pieces, and poems and so on, and, and put it together in the form of a reader. And so I thought, well, I've got enough stuff around to do that. Why don't I do that? And that's how Writing in the Rain came about.

(I’m) not a BC native, but I lived there for 10 to12 years, worked as a timber cruiser and did a bunch of other stuff.

So the book touched me in a in a personal way, just with all the reminiscences of the coast and the characters. I really enjoyed the book.

But one thing I have to say is when I first read it I didn't think of it as all that funny.

Many stories are poignant.  I know you obviously couldn't be completely surprised by the Leacock Medal because you entered the book in (the competition) or your company did.  But were you a bit surprised?

I was, I was entirely surprised. In fact, I wasn't in favor of entering it. You're only allowed so many, and I thought we had other books that were much funnier. But my, my marketing manager, Marisa Alps - God bless her - insisted on sending it in. And, and yeah, I was completely blown over when I heard it was chosen. I suspect it was all due to one particular story, which, for better or worse, has become my trademark, which is the story about hauling a truckload of rotten fish on the Sunshine Coast Highway.

Yeah, the fish, the truck full of fish guts is the thing that definitely sticks in your mind after the book.

But the part that I found the funniest, you know, in the sort of the classical sense of funny was when you were repeating the words that the old timers were saying in their kind of language. I think they were loggers or fishermen, and just the characters that came through in that.

I guess they weren't your words. They were words that were transcribed.

I don't know. You know, the interesting thing is until I won the Leacock award, I never thought of myself as a writer of humour, and certainly never thought of myself as any kind of a funny person and still don't. When I was in high school, my schoolmates called me “the Professor” because I was so serious. But I found the winning of the Leacock very liberating in in that sense, because I guess (there was) a suppressed humorist inside me somewhere. And after winning the Leacock, I sort of felt I had a license to let it out. And since then, I've written a lot of stuff that's more obviously humorous, more obviously intentional. In fact, I've got a book out right now called Here on the Coast, which a lot of people are comparing to Sunshine Sketches because of it's funny takes on small town life on the west coast.

From having read about in read the various Leacock medal winners, you're not alone, in that sort of feeling like: “I wasn't writing something intentionally funny, but it still won the prize.”

Angeline Hango wrote I think the third winner was actually thinking her book was quite sad at times.  Stuart Trueman won the one in 69, and he always thought he was just a very skilled journalist and writer. And yeah, there're other ones, you know, that define themselves as something other than humour writers.

So here's my take for what it's worth, the ones that win the medal, that transcend just the funniness and humor, are the ones that may speak to a local, like you were talking about Sunshine Sketches and the small town, but also speak to universal, and in Writing in the Rain, (the message) was the power of the natural environment to move you and how we should respect working people and how there's many cultures that make up Canada. Anyways, that was my take and why I liked the book.

Well, good. Yeah, I'm happy to hear that. And, you know in my speech, which I've since lost, I remember saying that one thing I especially appreciated about the judges’ choice is that they didn't hold that against me. That, you know, this was not an intentionally funny book. It was really a bool that was trying to be truthful about my rural, coastal working-class background, and they decided to honour those values, along with some scattered pieces that were obviously humorous, although they weren't intended to be humorous.

When I wrote about the fish spill, I was cringing because I was reliving the actual horrors of the situation. It's funny how often those kinds of experiences turn out to be humorous to other people reading about them. So it was a surprise to me.

I wrote that piece, I just decided to document the story. Edith Iglauer who was a New Yorker writer and lived in this community and was a good friend of mine phoned me up the day after and say: “Well, what did you do today?”

And she said, “No, I do,” which was typical of her. And so she made me tell that whole story to her over the phone, and she said, “Okay, now you have to sit down and just write that out exactly the way you just told it to me.” So I did that.

But I wasn't laughing as I did it. And I didn't think of it as funny until I was called in that year by the Sechelt Writers Festival - whenever they have a writer who bails at the last moment, then my phone rings, and they say can you come down and fill in for so and so. And so I didn't have anything fresh to read at that moment.

And it was all in typescript.

So I read it out. And I had no idea how it was going to be received it had never been published. And I kept hearing this strange noise. And every time I looked up, people were just rolling around in their seats laughing. And I thought, “Holy shit. They think this is funny.”

Maybe it resonates with that saying that humor is tragedy plus time, maybe?

So obviously, you're still active, got a book in the works. Forgive my ignorance here but are you still in the senior role with Harbour Publishing?

I'm still the publisher, still the president, still putting in long hours. We trimmed back a little bit during the pandemic, but we're going full steam again now. And it's grown enormously since 1991. And we were doing about 10 books a year then, we’re doing 40 now.

Well 30 years. It's about time you had another run at the Leacock medal.

I think probably - Marisa is still here and I'm not going to be able to stop her this time from sending that one. And so yeah, we'll see what happens.