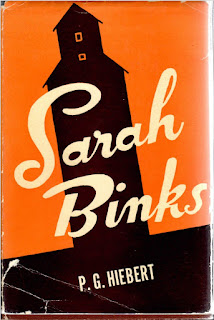 For Audio of Podcast Return to Home Page

This is an interview with Joel Salt, an expert in digital scholarship at the University of Saskatchewan Library who produced the university’s Paul Hiebert Digital Archive.  He discussed Hiebert’s 1948 Leacock Medal winner Sarah Binks.  The book is poetry collection packaged in a mock biography written by Hiebert, a University of Manitoba chemistry professor.  Many readers regard Sarah is iconic, and a book that comes as close to being the quintessentially Canadian work. It is also very funny.

The imaginary Sarah writes bad poetry, lots of it, and this ability to produce quantity over quality brings her fame in her native province of Saskatchewan. Readers might laugh at some of Sarah's poetry in isolation, but it is the book’s over-the-top gushing account of her modest life experience and its celebration of her talent that amplifies the humour.

The Paul Hiebert archive assembled by Joel Salt includes the author's own copy of the original manuscript of Sarah Binks, as well as the original of its sequel, Willows Revisited and other materials such as CBC radio interviews and a recording of the performance of Sarah Binks the musical in Biggar Saskatchewan. At first, the book seems to be a lampoon of life in the prairies. But as Joel points out, it also mocks the field of literary criticism and shows a lot of affection for the West.

So, Sarah Binks was created in his mind or solidified in his mind when he was working in Prussia, Saskatchewan, later renamed Leader as a teacher. And so he had this strong connection with Saskatchewan, even though he wasn't born here. And I think he kept that understanding of that connection with the book. And so when it came time for his materials to go to the (archive), he sent a letter province to us saying, “Hey, I don't see why you could possibly want this. But libraries are queer. And so if you think it's worth having, if you think it's worth the space on the shelf, I'll happily send it your way.”

And so I think that it's important to understand his respect for Saskatchewan, for the people of Saskatchewan, and for farmers. And he later wrote an article called The Comic Spirit at 40, below for Mosaic. And he brings up Twain and Leacock in it, and says that they knew those places, and thus had affection for them. And the one you know, and says the ones who really loved the West can always laugh at it and with it. So he understood that the way that Leacock was looking at Orillia and poking fun at it, with that, inside wink that only someone who is of the place can do. I think that's what he's trying to do with Saskatchewan, with Sarah Binks. And so any bit of parody or satire, I think, lacks the bite that a few people have ascribed to him. I think it's very much a part of the book that the people of Saskatchewan themselves know who we are. And there's a very self reflexive understanding of that mild satire.

I recently stumbled on something on the web by a person who claimed to have known Hiebert personally. And she thought that he was making fun of his hometown residents in Manitoba, but he wanted to distance himself and talk about Saskatchewan. So the last time I looked there, they were skim through sir banks. I was struck by the number of times he talked generically about the prairies and the West, framing it all. So yeah, it did make me think of your comment of him wanting or feeling that he was one of views, Saskatchewan honors, or wieners.

He does also an article tell a really great story about trying to find a publisher for this manuscript, and he sends one to an American editor, who takes it very seriously, and marks it up correct spelling comments even finds a way to compliment a few of the poems and sends it back and says, I think perhaps as a Canadian, you're over- estimating the poet's talents.

Sarah Binks is rich on many levels. But one of the ones that strikes me from time to time, is the notion that the humor is ostensibly about a lack of culture in the West. And yet, the book itself is a literary work that is very much of the West, that sort of undermines and deflates that proposition that there was no culture in early 20th century, Saskatchewan. But there was and it took a specific kind of skill set to approach it. A lot of reviews of Sarah Binks conclude that it's more of a satire of literary criticism, as much as a satire of life in the West. Does that resonate with you?

Yeah, I think I think there's a lot of targets in here. And, and most of the targets are hit with feather arrows. I think two areas get hit the hardest - one would be poor Mathilda Schwantzhacker, who is maybe the one time he was mean, but the other the other one is the academic community. And I think that, first of all, he's a part of it. So he himself is included in the mighty strokes of the pen he makes. But I think also the sense of Saskatchewan or the West as being remote from the urban centers, remote from culture. I think that's one avenue that he gets at that is by producing these fictional academics who take themselves too seriously and are the often the ones themselves who are wrong.

So we can laugh at Sarah's bad poetry. But when the narrator goes through and says that Sara beings is such, such off the land, that she could take the leaves of her poetry and spread it back across to fertilize it, he doesn't understand the joke he just made. So there's a sense again, that the people the self reflexivity of it, the people of Saskatchewan, and we were all Sarah Binks, or at least we were at one point, right, that's the idea. We all had to her naivete in her, whatever. And that there's some sort of beauty in that, and that the hard-nosed academic doesn't understand it, and never will. And I think that's another way of pushing the other way. And an obtuse way of saying, this is our community, this is the way that it works. And to be a part of it is to really know that.

I love the way you've articulated those thoughts, Joel, in the fact that the University of Saskatchewan has embraced Sarah and hopefully use that resource to turn the tables on anybody who thinks that Saskatchewan is worth mocking: it's a beautiful place.

One last thing I can say too, for anyone who doesn't maybe get to the end of the book, or in a very similar way to Leacock. And any sense of malice that you might perceive probably should disappear.

Because the poem in the L’Envoi isn't strong. Hiebert after all is Sarah. But there are no targets. There are no jokes. There's no irony or parody or satire in the L’Envoi. And in the final stanza he writes, “Oh, the years have gone forever, hurdy gurdy, hubble bubble, but the autumn nights still bring me like a breath across the stubble, like a land breeze in the tropics, full of murmur and delight. Sounds of separators drumming, in the pale moonlight, sounds of dogs and creaking wagons and the heavy smell of grain and the call of distant voices that I'll never hear again.”  A call to his past and beautiful nostalgia that that is a recollection of a joyous experience of living in the prairies.

Again, I'm indebted to you Joel for pointing that out because that does resonate vigorously with the L’Envoi in Sunshine Sketches because as you read it, he never actually reaches Maripose, trying to go back to something that is kind of vaporous. So, thanks again for doing this and thanks for doing the digital archive.

Of course, always happy to talk about Sarah Binks.