Many people compare creativity to child-like play – guided by a bit of knowledge. 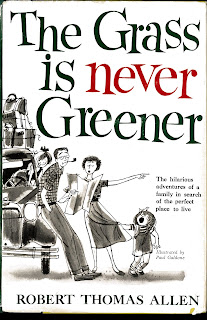 But few take that insight to the next level, make an effort to really understand the perspective of children, and then to apply it to their art.

One of these exceptions is two-time Leacock Medal winner and Toronto-native Robert Thomas Allen.

Allen’s first Leacock Medal book, the Grass is Never Greener (1957), was funny and tightly written.  But fourteen years later when he won the Leacock Medal for Children, Wives and Other Wildlife, his writing seemed more thoughtful.

He had spent the years between his medal wins observing people, particularly his own daughters. Like a sociologist doing field work, he studied them in a quest to understand what made people laugh. He even sat in classrooms where he learned that while little children laugh at obvious disruptions like an adult breaking wind or friends acting silly, they struggle with jokes that require context.  And in the absence of this info, they sometimes base their judgments on parental or peer reactions. 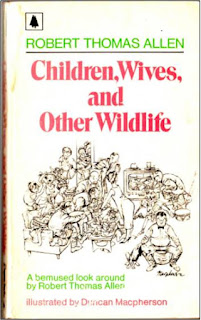 From this, Allen realized that for children and adults alike “the humour in a joke doesn’t come from the joke itself, but from a lot of mental pictures, ideas, feelings, and associations that the joke suggests.” This kind of thinking gave Allen’s writing the power to amuse and touch the heart in an intelligent way and made me wish I could meet the late Robert Thomas Allen (1911-1990).

So, I was delighted to learn that one of his former colleagues, a respected journalist and one-time Leacock Medal nominee, lives here in Ottawa.

Roy MacGregor, now a Globe and Mail columnist, was working for The Canadian Magazine, a weekly newspaper supplement, in 1975 when he met Allen or “RTA” as the humorist was then known.  MacGregor remembers Allen as a unique person as well as a unique writer.
“RTA wrote in a gentle, self-mocking, yet quietly insightful and sneakily profound manner,” MacGregor said. “He sneaked up on readers, ensnared them with charm and then taught a life lesson.”

Still, he recalled Allen as having a hard time selling his wares by the late seventies.
“It was somewhat out of fashion by this time,” MacGregor said. “Watergate had profoundly affected the way ‘journalism’ saw itself and gentle humour was not in the mix - You had to be tough, deep, serious and changing the world - RTA had no interest in any of those things and if he made people smile or chuckle, he was having a good day.”

He said that even though the Managing Editor at The Canadian, MacGregor’s distant cousin Allan Walker, was Robert Thomas Allen’s great champion, others were cooler to the gentle, child-like style. They included the Editor Don Obe, who had come from MacLean’s like MacGregor and generally wanted that tougher stuff. 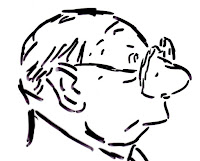 But they made an exception for RTA and saw something worthy in his pieces.

“He didn't really pull your leg but he offered up thoughtful observations which would make you smile, too – and super nice, sweet, hopeful,” MacGregor said of Allen, the man who provided  the model for the Canadian “Everyman” character featured for years in Duncan MacPherson’s Toronto Star editorial cartoons. “RTA was this in real life too - I never heard a sour word, never saw a flash of anger.”

MacGregor allowed, in fact, that The Canadian editors might have accepted Allen’s work after it seemed to go “out of fashion” partly because of the writer’s Canadian-ness and cheerful personality.

“He was as polite as any human ever was and so Canadian the word "sorry" was minted for him.” MacGregor said recalling the lunches he and fellow journalist Earl MacCrae shared with Allen. “He always dressed the same, as if he was on the way to church in some small Ontario town in 1954.”

Allen said he didn’t consider himself to be a “real writer” like the staff at the magazine, copywriters, and journalists with the daily grind. He called himself “a dabbler” and “not in the same league.”

With some “damned shame” resignation, MacGregor suggested to me that today a writer with such an innocent and child-like perspective would be “destroyed by social media – trolls” who “would ridicule him, attack him, and savage his attempts at humour and, ultimately, a writer like that would take his leave rather than put up with it.”

I’m not so sure about that. 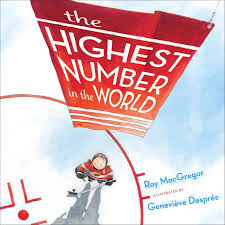 I met MacGregor at Kaleidoscope Kids’ Books on Bank Street near Lansdowne Park in late winter 2014.  He was talking to kids and signing copies of his then new book The Highest Number in the World.

It tells an inspiring story of a little girl – Gabriella or, as she prefers, Gabe - who dreams of hockey greatness and wearing the same number of her jersey as Canadian national team star Hayley Wickenheiser.

Roy MacGregor not only writes information-dense, thought-filled and constructive stuff on politics, business, sports, and art, but also has enough children’s books under his name to be recognized as an accomplished and successful writer in this genre alone.

Re-reading some of his columns and thinking about his ability to assume little Gabriella’s point of view, I realized that while I will never meet Robert Thomas Allen, I might have had an encounter with his spirit.