Lesson 59
On the need for continuous curiosity 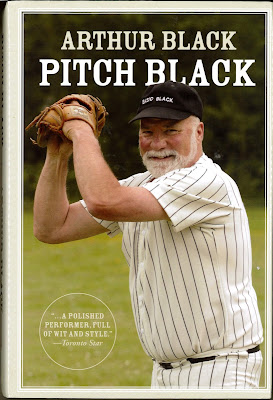 “I plan to improve with age, like fermenting wine,” I said.

My wife asked if this meant she should stuff a cork in my mouth and keep me in the cellar.

“No, no . . . I have to breathe and swish around in the real world--you know, just like post-retirement Arthur Black.”

The fear that age equates to an inability to keep in touch with human events and the issues that interest others can be challenged in lots of ways, but a potent one would be to point to Black’s third Leacock Medal book, Pitch Black, which won the award in 2006. Four years earlier, Black had taken official leave from his CBC job where he had developed his style and produced material for his earlier medal winners.

Now settled in B.C.’s Gulf Islands, he could have pulled back a bit. But instead, he stayed curious and connected, contributing to newspapers and giving speeches. In many ways, the post-retirement Black reads a lot like the pre-retirement one. His pieces, still around 700 radio-friendly words, cover a wide range of subjects running from animal rights, public nudity, and marijuana to coffee-drinking as a profession, talking toilets, and the invention of macaroni and cheese on a stick.
If anything, he may have broadened the scope of his preoccupations and peeves with rain-coast references and his stories about Salt Spring Island life.

Black did not mellow, either. In this book, comments like, “this is nuts,” or “Does it get stupider than this?” routinely introduce his rants. Black sounds, in fact, like someone who has decided that the time has come to take a few more risks, go out on a limb, and lob a grenade or two that may not have survived the political correctness of a CBC script.

He likes the terms “nutbar” and “Right-wing nutbars” and uses them on those who see The Simpsons as a threat to family values and “the Amurrikan way of life.” He calls Howard Hughes the “famous nutbar” and lists then US President George W. and a string of European royals as inhabitants of the “nutbar department.” The federal cabinet is “a collection of submissive human sock puppets” and “nutbars.”

He also throws around the “Nazi” label, identifying his childhood dentist by name and saying he “had the forearms of a longshoreman and the compassion of a Nazi.” Diet guru Atkins leads the “Carbo Nazis.”

Finally, Black directs a tirade at the missing Al-Qaeda leader, saying how much he loathes “Osama bin Hidin’ and his venomous pack of psychopathic lunatics.” That may not seem harsh, given the subject, unless you know that Black’s rant was actually inspired by Bin Laden’s chin whiskers which, he says, have “given beards a bad name.”

Together, these rants might suggest that Arthur Black had crossed over into the fermented-wine, old-man phase. But read in context, they come across as amplifications of the personality Black has always had, maybe with a touch more pluck. One way to write naturally, to be yourself, and to express feelings without concern, of course, lies in basic goodwill and dedication to coherence and quality. Black shows this when he talks about writing style and words.

He mocks those who think of writing as effortless typing by quoting Stephen Leacock: “Writing is simple: you just jot down amusing ideas as they occur to you. The jotting presents no problem; it’s the occurring that is difficult.”

Black is open to learning from any source and admits to having admiration for tabloid newspaper journalists “because writing even a mediocre tabloid story is fiendishly difficult. You have to deliver a maximum amount of impact with a minimal number of words--and simple words at that.” Black definitely doesn’t consider writing for publication to be a hobby or something to pass time in retirement.

On the never-ending need for hard work and study, he repeats the Margaret Laurence story of “an eminent Canadian brain surgeon [who] once made the mistake of telling . . . Laurence over the hors d’oeuvres that when he retired he planned to become a writer. ‘What a coincidence,’ she responded sweetly. ‘When I retire, I plan to take up brain surgery.’”

Maybe novelists like Laurence and even people like me can pursue neurosurgery in retirement if we live long enough and have Arthur Black’s inclination to keep learning, working, and jabbing at people.
Writing Exercise
Write an analysis of the last federal or provincial budget in memo format as a government policy analyst. Then rewrite it using the words “Nazi,” “idiots,” and “nutbars” at least three times each.
Newer Post Older Post Home