1996 Letters from the Country by Marsha Boulton

Lesson 49
The caring yet practical perspective of farmers 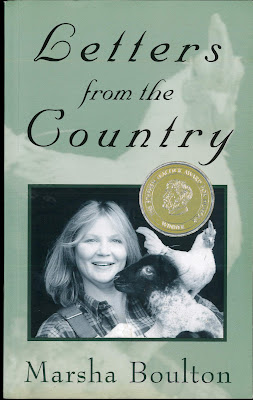 Our family christened my sister as “the caring one.” When her lamb died, we dug a grave by the barn, held a funeral, and tried to comfort her. When my pig, Herkimer, left the mortal world, we put him in the freezer and then ate him. That was fine with five-year-old me, “the practical one.”
From that time, my sister was not tagged to be a farmer because she was seen as too sensitive and squishy for the necessary dispatching of livestock. I, too, was not farmer material because I, on the other hand, did not seem to care enough for animals. We learned at an early age that farmers need a perfect blend of caring and practicality. Farmers should also have a sense of humour, and great farmers know how to share these characteristics with others.
By all these measures, Marsha Boulton makes a great farmer, even though farming was not her first career choice. Sometimes caring, sometimes practical, and always seeing the humour in our presumptions about farm life, the 1996 Leacock Medal winner could also communicate it all well.
Letters from the Country, the medal-winning work, describes the routine events of rural life in central Ontario with the amusement and awe of someone who came from the city. Boulton moves to the farm after years of glamour as editor of the “People” section of Maclean’s magazine, where she had spent her days interviewing “celebrities, actors, writers, musicians, poets and politicians.” Her farm stories read like a series of reports to former colleagues and friends in a magazine article / CBC feature kind of way.
Her transition to the farm was not direct or obviously preordained. Although her book mentions a brush with cancer, it doesn’t link this to the change in lifestyle.
The practicality and caring combo comes through clearly in reports on her sheep. She shears the wool, cleans hooves, and measures scrotums. She oversees hundreds of births, cradles young lambs in her arms until they fall asleep, clears their noses, and helps them wean. Then, she takes pride in seeing her babies listed as “Lamb from Marsha Boulton’s farm” on the menu of Toronto restaurant Bistro 990.[1]
Although she identifies herself as a shepherd, and her sheep are the most common subjects of her stories, Boulton’s collection covers a range of rural experience from snakes to porcupines and cats to cucumbers. Non-farmers learn that geese have bad breath, turkeys are so dumb they drown while drinking rain, hermaphrodite sheep are money-makers, and chickens caught in flypaper are hard to manage. Anyone from a rural area will nod at her stories about skunk encounters and deals at local auctions. 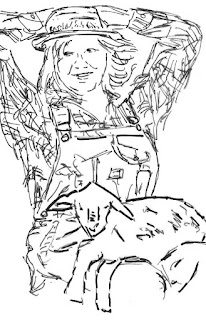 She says rural experience has a dark side, too. It includes vandalism and theft beyond worm rustling, mailbox smashing, and Christmas tree thieving. But Boulton mitigates these stories with an ambiance of caring for two-legged animals, her neighbours and friends. She can even see humour in that practical, caring construct.
“City people often live under the fantastical notion that the kindly farmer always has room for another dog,” Boulton says with charity toward the practice of dog dumping. “When they have an unwanted puppy, they drive out into the country and drop the animal off near the end of a laneway for the kindly, anonymous farmer to find.”
Of course, before someone finds the puppy, it has to dodge traffic, hawks, and other hazards. If the dumped puppies and kittens live long enough, they join other wild animals that harass the livestock. This usually means that “the kindly farmer ends up having to get out the varmint gun” and do the practical thing.
Boulton wrote this book about a decade after her move to the country, and while her writing, radio work, and editing of a local history suggest she could not leave her first self behind entirely, you get the feeling that she has settled on the farm for good.
I am glad that no one told Marsha Boulton that she was not suited to farming, or if they did, she ignored them. She certainly seems better suited to living and celebrating the two-pronged requirements of rural life than either my sister or me.
Writing Exercise
Write a story about farmers who leave their unwanted livestock in the city assuming that urban dwellers will figure out a way to deal with them.