Lesson 47
Finding time and space to read and write 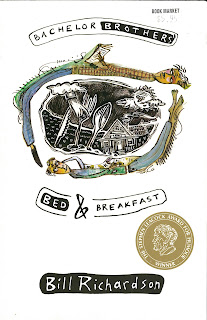 For many years, my one persistent, non-monetary, fully clothed fantasy has been to invent a gigantic “Pause” button to put the universe on hold. With no one growing older, no problems worsening, and no swelling of my inbox, I could dream up new ideas, catch up on emails, take more time to read books, and write.
We will not likely see such a time-and-space Pause button in the near future, but I’m able to imagine it more easily after reading Bachelor Brothers’ Bed and Breakfast, the 1994 Leacock Medal winner by CBC announcer Bill Richardson.[1] An idyllic, Pause-button place “located on one of the islands that populate the Strait of Georgia, between Vancouver Island and the mainland,”[2] the B&B gives guests space to disengage from pressures, relax utterly, and read. Hector and Virgil, the bachelor proprietors, take turns documenting stories about their guests and celebrating written words in their journal-like book.
Helen, one guest who returns to the B&B every year, rereads Treasure Island because her first husband carried the name of the central character, Jim Hawkins. He went off to war and his death immediately after their wedding. Other notes, lists of books, mini-reviews, and the brothers’ random thoughts make up the rest of the book.
Many of the Leacock medallists muse about writing and make allusions to great literature. But Brothers comes closest to the format I want for my account of my year of reading humour. It blends the readers, their anxieties, and their experiences with the literature in a way that makes you want to read more books.
It also shows you how to write them.
In imagining the B&B for himself, Richardson creates not only a place where people can enjoy books, but also a space where two men can live together as life partners,[3] dress up as roosters, collect flowers, play musical egg cups, use moisturizers, cook, keep cats, and feed birds without their other orientations defining them.

Part of being themselves involves finding time to write their book. They, like many other writers, real or imagined, have busy lives. The B&B can be a dawn-to-dusk drone of domestic duties: “cooking, cleaning, mending, marketing.” But the brothers compartmentalize the day and get it all done.
“The satisfying and consuming rigours of housekeepery rarely allow us time for reflection or inward looking,” Hector says. “So, of necessity, these little accounts of our goings-on are set down late at night when the dust of the day has settled; or first thing in the morning, before it has been stirred up.”
In writing these reviews, I experienced a bit of a breakthrough when, like Bill Richardson’s Bachelor Brothers, I decided to commit to writing every day in a different way. Instead of setting dispiriting goals of quantity or quality, I resolved to sit at the keyboard for at least sixty minutes, trusting that I could always squeeze out an hour from my day even if it meant getting up early or staying up late, and that this would translate into progress. It was hard at first, but eventually it became much easier to find the time, sit down, and put the universe on pause.
Writing Exercise
Two sisters work as long-haul truckers driving eighteen-wheelers. Describe their lives and how they each manage to find time to write while on the road.


[1] Richardson earned a master’s degree in library science at UBC and worked as a librarian for a while, but he had his greatest impact as a promoter of books and literacy through CBC radio: Bachelor Brothers’ Bed and Breakfast segments aired on the Vicki Gabereau Show in the early 1990s. Later, CBC gave Richardson his own arts and letters program to replace hers. A nice bio from his publisher can be found at http://www.annickpress.com/author/Bill_Richardson.
[2] The fictional B&B sits in a green valley near the Well of Loneliness coffee bar, the Rubyfruit Jungle service station run by New Age lesbians, and other Gulf Island-style amenities.
[3] Richardson left this issue to the imagination, as well as the possibility that the fictional fraternal twins, with “few superficial resemblances” and a paternity that is difficult to corroborate, may have invented their own narrative to live their lives in peace. The closing chapters explore male bonding, the cultural and culinary intricacies of baking a fruitcake, and the inspiration of Liberace, who took “his mellifluous and unabashedly fruitcake voice” on a prideful visit to the rougher side of Vancouver.
Newer Post Older Post Home