1992 Prayers of a Very Wise Child by Roch Carrier

Lesson 45
The humour in unfettered truth 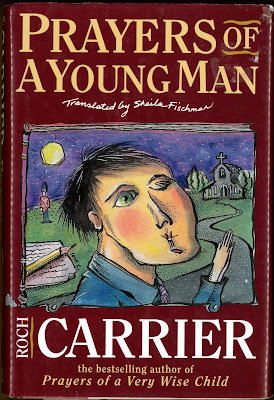 My francophone father-in-law’s reaction was funny, but honest. He struggled with the suggestion that a French Canadian kid might not want to play for the Montreal Canadiens and could find writing “a lot more fun than winning a hockey game.” Weird--particularly since this kid came from the imagination of Roch Carrier, the author of Le chandail de hockey (The Hockey Sweater).
“Funny, but honest” pretty well sums up Carrier’s 1992 Leacock Medal winner, Prayers of a Very Wise Child, a collection of questioning messages to God delivered in the words of a boy in 1940s rural Quebec.[1]
Prayers like these have a lot of potential. A conversation with Someone who knows all of your thoughts and deeds invites candour and the discussion of difficult issues--a combination that often feeds humour. With World War II, poverty, and religious constraints, the times did not lack difficulties, and the boy’s prayers tap many of them.
Some humour comes from the interplay between the Church and the child. When a local man hangs himself in the wake of his wife’s infidelity and a fire that killed his children, the priest determines that the body should be buried outside the graveyard with the dogs, explaining that the man didn’t die like a Catholic, “he died like a dog.”
“God, I’ve never heard of a dog that hanged itself. . . . Is our religion the best, God, because it’s the one where you suffer the most?” the boy asks.
Carrier’s boy doesn’t sound authentic all the time. He uses too many adult expressions, comparing a saint to “a raving lunatic,” fearing that his “grandfather got screwed,” and quoting the newspaper Action Catholique. 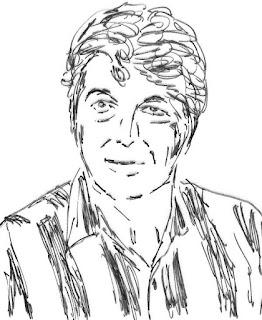 But Carrier did this intentionally and had an impact mixing those references with thoughts like, “Sometimes I wish I knew less about grammar and more about [bare] bums”; and even sillier stuff from adults: “Our grandmother’s greatest hope for the War in Europe is that our French Canadians [fighting there] don’t swear too much. Their bad words would scandalize the French, who only know fancy words.”
In the end, the little boy sounds like both adult and child, and his prayers mix self-interest with genuine concern for others. In his outpouring over the plight of children in concentration camps (“They look like skeletons, with only enough skin to hide their bones. They have hollow eyes; they’re scared. They look like little dead children, but they’re alive”), the boy pleads with God to “make a miracle to stop all that suffering.”
Then, in the next breath, he announces plans to head to the rink, asking, “Please, God, don’t forget me. I’d be really glad if Your holy finger could push the puck into the net.”
Maybe he’s not that weird after all--just honest and more like the rest of us and the hockey-sweater kid than we might think.
Writing Exercise
Write a prayer about the Montreal Canadiens, your favorite food, and Peace on Earth.