Excerpt from story Sunshine sketches of a book on humour 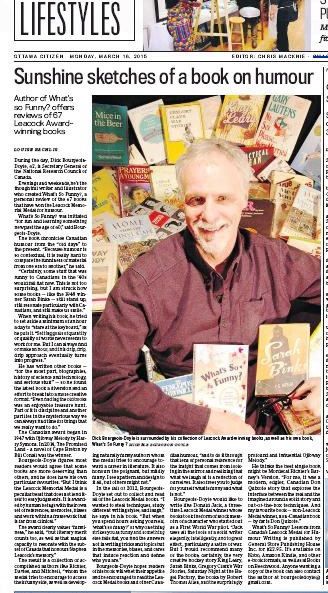 The article by Ottawa writer Louise Rachlis begins with:

"During the day, Dick Bourgeois-Doyle, 62, is Secretary
General of the National Research Council of Canada.


Evenings and weekends, he’s the thoughtful writer and illustrator who created What’s So Funny?, a personal review of the 67 books that have won the Leacock Memorial Medal for humour."


What’s So Funny? was initiated “for fun and learning something new past the age of 60,” said Bourgeois-Doyle.


The book chronicles Canadian humour from the “old days” to the present. “Because humour is so contextual, it is really hard to compare the funniness of material from one era to another,” he said.


“Certainly, some stuff that was funny to Canadians in the ’40s would fall flat now. This is not too surprising, but I am struck how some books — like the 1948 winner Sarah Binks — still stand up, still resonate particularly with Canadians, and still make us smile.”


When writing his book, he tried to set aside a minimum of an hour a day to “stare at the keyboard,” as he puts it. “Setting goals of quantity or quality of words never seems to work for me. But I can always find or make an hour, and this drip, drip, drip approach eventually turns into progress.”


He has written other books — “for the most part, biographies, history of science and technology, and serious stuff” — so he found the latest book a diversion and an effort to break into a more creative format. “Even finding the old books was an enjoyable treasure hunt. Part of it is discipline and another part lies in the mysterious way we can always find time for things that we really want to do.”


The Canadian award began in 1947 with Ojibway Melody by Harry Symons. In 2014, The Promised Land - a novel of Cape Breton by Bill Conall was the winner.


Bourgeois-Doyle figures most readers would agree that some books are more deserving than others, and he does have his own particular favourites. “But I think the Leacock Memorial Medal is a peculiar beast that does not lend itself to easy judgments. It is awarded by human beings with their own set of references, memories, biases and work within a framework that is far from clinical.”


The award clearly values “funniness,” he said, “but literary merit counts too, as well as that magical capacity to resonate with the subset of Canada that honours Stephen Leacock’s memory.”


The result is a collection of accomplished authors like Richler, Davies, and Mitchell, “whom the medal tries to encourage to access their funny side, as well as developing naturally funny authors whom the medal tries to encourage toward a career in literature. It also honours the poignant, but mildly funny. I see a pattern and design to it all, but others might not.”


In the fall of 2012, BourgeoisDoyle set out to collect and read all of the Leacock Medal books. “I wanted to steal techniques, study different writing styles, and laugh,” he says in his book. “But when you spend hours asking yourself, ‘what’s so funny?’ or why one thing strikes you as funny and something else falls flat, you find the answers not in writing tricks and topics but in the memories, biases, and cares that induce reaction and define who you are.”


Bourgeois-Doyle hopes readers of his book will whet their appetite and be encouraged to read the Leacock Medal books and other Canadian humour, “and to do it through that lens of personal reference for the insight that comes from looking in the mirror and realizing that what we laugh at is a reflection of ourselves. It also frees you to judge for yourself what is funny and what is not.”


Bourgeois-Doyle would like to write like Donald Jack, a threetime Leacock Medal winner whose books took the form of mock memoirs of a character who started out as a First World War pilot. “Jack uses all the tools of a solid writer elegantly, intelligently, and to great effect, particularly a satire of war. But I would recommend many of the books; certainly, the very creative hockey story King Leary, Sarah Binks, Gregory Clark’s War Stories, Saturday Night at the Bagel Factory, the books by Robert Thomas Allen, and the surprisingly profound and influential Ojibway Melody.”


He thinks the best single book might be Mordecai Richler’s Barney’s Version. “For me, it was a modern, edgier, Canadian Don Quixote story that explores the interface between the real and the imagined around a solid story and out-of-the-box techniques. And my favourite book — non-Leacock Medal winner, non-Canadian book — by far is Don Quixote.”


What’s So Funny? Lessons from Canada’s Leacock Medal for Humour Writing is published by General Store Publishing House Inc. for $22.95. Anyone wanting a copy of the book can also contact the author at bourgeoisdoyle@gmail.com.