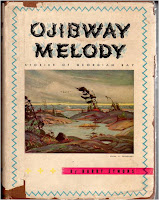 If not in humour writing, at least in the halls of academe and scholarly social sciences, Ojibway Melody author Harry Symons was surpassed by his son Thomas.  Tom Symons, born in 1929, has a long resumé that includes founding Trent University in Peterborough, which, reflecting the concerns of its first President, pioneered the discipline of Canadian Studies and became the first post-secondary institution in Canada to establish a department in Aboriginal Studies.  Trent continues to lead and advance the field.
Tom Symons was educated at the U of T, Oxford, and the Sorbonne and built a strong reputation as a scholar, but he also took his academic interests to other arenas including business and what is termed the practical application of policy and social research.   To many, he is best known as Chair of the Commission on Canadian Studies and author of its influential 1975 report To Know Ourselves.
But he also served on many national policy boards as well as the chairman of the Ontario Human Rights Commission (1975-78), the founding Vice-President of the Social Sciences and Humanities Research Council (SSHRC), and chairman of the Historic Sites and Monuments Board.  He is credited with promoting Canadian letters internationally as a member of the Commonwealth Standing Committee on Student Mobility, as chair of the International Board of United World Colleges and chair of the Association of Commonwealth Universities.

His life is celebrated by many leaders from academe, business, and politics in a book Tom Symons: a Canadian Life (2011 University of Ottawa Press. Ed. Ralph Heintzman)
Professor Symons knew many of the early Leacock Medal winners personally.  W.O. Mitchell taught at Trent, and Symons helped recruit Robertson Davies to the post of Master of Massey College.  In fact, Symons and his wife still live in the Peterborough home, the Historic Marchbanks house, that the couple bought from Davies in 1963. 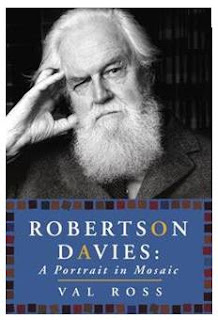 Davies treasured the home (he wrote his Leacock Medal winning Leaven of Malice there) and had to ponder long and hard before he concluded that Symons “would do” as a new owner and someone to be trusted with its care.  (See this story in Robertson Davies: A Portrait in Mosaic by the late Val Ross)
It was, to put it humbly, a distinct honour to be invited to Marchbanks this year (2013) to interview Professor Symons for this project.  He provided a lot of background and told me that the cottage and the Georgian Bay of the 1940s described in Ojibway Melody were big features of his life as a young boy.

He added, however, that the Leacock Medal book itself had an even more profound impact.

"I love the book ... and it means a great deal to me.  I often think of
it because it gives me answers when I am considering things - it helps
as a compass when I have difficult chores from time to time.

First of all, it reads the way my father talked and I enjoy that.
I can hear his voice.

But I also hear his respect for people and his concern for others.  The
book is all about it - between the lines sometimes.

Over three-quarters of a century ago, his empathy and concern for the
aboriginal people was impressive.  That chapter is superb.

I was raised with that concern, and I am sure that that is one of the
reasons that Trent University was the first university in Canada
to have a department of native studies.  It is shocking that as late as
the founding of Trent and its program in the late sixties, no university
in Canada had a formal program of that sort.

So, as I said, that was something I grew up with.  My interests and
concern for the rapport between French and English people and the
history of Georgian Bay and Champlain's exploration.  These are strands
that run through the book.

You sometimes don't recognize the deeper values of the author because
it is written so amiably, but the book is a touchstone for me and the
things I value and respect." 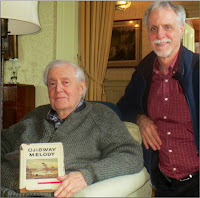