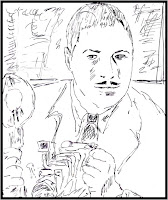 Review of Battle of Baltinglass

Politics and Lessons from Battle of Baltinglass

Lawrence Earl was the name adopted by Lawrence Wiezel who was born in Saint John, New Brunswick in 1915 where is father Herman owned a shoe store.  While in Saint John, Larry Earl founded the high school newspaper.
He spent most of his life, close to fifty years in London, England, were he worked a photographer and a war correspondent covering major events including the invasion of Normandy first hand.
Although he was successful by many standards as a novelist and journalist, he first regarded himself as a photographer taking images that were used on the cover of Time Magazine, for feature stories in National Geographic, and other leading publications. His work also appeared in Maclean's, and the Saturday Evening Post.  HE was once editor of the Star Weekly.
Larry Earl met his wife Jane Armstrong while working at the photo-filled Montreal Standard in 1940.  They married in 1943. Armstrong was also a well known Canadian journalist and one of only two women to serve as correspondents overseas during WWII.
The couple stayed in Britain after the war and worked as a team throughout Europe and North Africa covering stories for London Illustrated and Mirror Features.
The Greater Saint John Community Foundation established  “The Jane Armstrong Earl Fund” to celebrate Larry Earl’s wife and her career after her passing in 1999 at the age of 84.
Prior to The Battle of Baltinglass, Earl wrote a book recounting the story of much more serious confrontation.  Called Yangtse Incident (1950), it tells the true story of the British ship, the HMS Amethyst, its attack, and subsequent escape during the Revolution in China in 1949.  This book was later made into a major movie that was 15th in the British box office in 1957.   It was distributed in the U.S. under many different names.  The movie starred the Irish-born actor Richard Todd and other well known figures of British cinema such as Donald Houston.
Earl wrote five other books: Crocodile Fever (1954), The Frozen Jungle (1955), She Loved a Wicked City (1962), The Riddle of a Haunted River (1962), and Risk (1969).  Often receiving glowing reviews in Time, the New York Times, and other leading publications.
Larry Earl was the uncle of the distinguished University of New Brunswick Business Professor Gary Davis.
Larry and Jane Earl moved back to New Brunswick for their final years in the late 1990s, both passing away in Saint John.
DBD February 2013
Review of Battle of Baltinglass

Politics and Lessons from Battle of Baltinglass