When I read Sarah Binks for the first time, I believed that the author Professor Heibert had modeled his heroine on  E. Pauline Johnson, the late 19th and early 20th century Canadian poetess of mixed aboriginal-European ancestry.


Each woman gained great fame through means not directly tied to the quality of her poetry.  Pauline through public readings and performances.  Sarah through the sale of magazine subscriptions, the collection of product labels, and  -quantity. 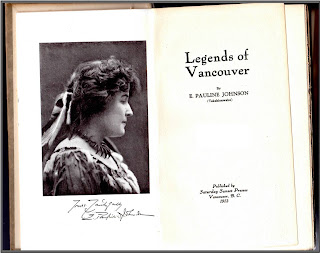 Both women, the imaginary and the real one, were boosted by association with Liberal Party politicians. Sarah was celebrated repeatedly by the Honourable Augustine Windheaver, Minister of Foreign Affairs and Grasshopper Control; Pauline was supported in staging performances by local arms of the Liberal Party.
Like Sarah, Pauline was portrayed as an icon of the struggle with the harsh Canadian landscape and the young country's still-fomenting culture.
·         Several of the imaginary Sarah's works such as the Song of the Chore and Song to the Cow as well as the events and personalities of her life seem to be purposeful echoes of Pauline Johnson themes and titles such as her most famous: Song my Paddle Sings.
·         Pauline Johnson, although born and raised on the Six Nations Reserve in Ontario, grew up in an atmosphere that downplayed her aboriginal heritage, and she eventually relied upon her Mohawk grandfather for the knowledge and links to this line of her ancestry.  Sarah Binks was also described as a writer and poet who had to rely heavily upon her Grandfather Thurnow for family lore and ancient wisdom including an understanding of the aboriginal people.
·         Both women wrote periodically in enigmatic forms and uncommon languages.

·         Finally, Sarah's geology-based magnum opus, Up from the Magma and Back Again has parallels in one of Pauline Johnson's final works, the legend for the magma-formed Siwash Rock in Vancouver's Stanley park.
·         Both women were believed to be imperfect writers and the creators of overly sentimental, weak poetry.
·         Although Pauline Johnson's sad death from breast cancer at age 52 did not have the bizarre overtones of Sarah's fatal encounter with the horse thermometer, it was another tragic, too early event that drew a great public outpouring that powered her notoriety and posthumous fame in the same way as the fictional Sarah Binks was aftermathed.
·         Johnson was celebrated primarily after her death as the model of “the New Woman” and as a barrier breaker as a woman.  Sarah Binks concludes with a chapter dedicated to “Sarah, the Woman” describing the after effects of her death in a similar spirit.
·      There is a small, stone monument to Pauline Johnson in Stanley Park that is minimalist as is Sarah’s monument in her fake home town in Saskatchewan.
·    Neither woman’s bodies are at the location of their monuments.  Sarah's remains are not there because they do not exist.  Johnson wanted her body buried in Stanley Park. But wanting to avoid a precedent, Vancouver City authorities would not allow it and only conceded to having her cremated ashes in the Park.
·    Experts like Earle Birney, one of Canada’s most respected poets, a Leacock Medal Winner, and two time Governor General’s Award winner for poetry, thought Pauline’s work was mock-worthy, and loved Sarah Binks the satire.
Johnson's celebrity and the resentment of her work in the stuffier Canadian literary circles were in ascendency during Hiebert's pre-chemistry university days - the time in which he was studying, ruminating on literary history, and absorbing the prevailing attitudes of academia.
However, I have not seen any explicit reference that would verify the Sarah-Pauline link.  Professor Hiebert is, in fact, quoted as saying that Sarah was not a reflection of any single person. I accept his word on this and take my Pauline Johnson hallucination to be merely another illustration of the power of Sarah Binks to bear myriad interpretations and reads.

For more on Sarah Binks and Paul Hiebert
What So Funny? Lessons from Canada's Leacock Medal for Humour Writing

and to - TRIVIAS HUMOROUS - Sarah Binks

Sarah Binks and the National Research Council in Ottawa

and
The Story of My Copy of Sarah Binks