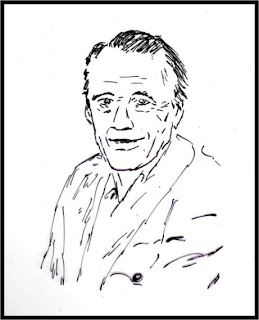 In March of 2013, just days after my online purchase of “And Now Here’s Max ...,” the author and subject of the book died, reportedly of a heart attack, at the age of 89 in Cobourg, Ontario.  I hope the heart attack means it was swift and not presaged by undue ailment. The obituaries made it clear that Max Ferguson was loved by many people including thousands who only knew him as a voice on the radio, but considered him a friend.
The ambiance of his passing made my review of the tattered forty-six-year-old book a bit sad.    I too felt I was making a friend, one who was passing away.  It would not be the last such experience for me this year.
Although his autobiographical book was written before the halfway point of his life, it provided the substance for most tributes, even those penned by those close to Ferguson. They  relied sometimes exclusively on “And Now Here’s Max ...”  for stories to describe the man. We like to reminisce and recall happy times when we grieve someone’s passing, and it was probably hard for anyone to surpass Ferguson’s own upbeat reminiscing on his life.
Consistent with the emerging pattern that suggests it takes 20-years-for-happy-nostalgia to set in, Ferguson wrote his book, which is rooted in mid-to-late 1940s experience and instigations, in the late 1960s.


With respect to my compilation of Leacock medalists, I do not want to forget that he, like Donald Jack, Richard J. Needham, Joan Walker, and maybe others, was born in England.  Ferguson’s birth was in Durham on February 10, 1924.  His family came to Canada when he was a child and settled in London, Ontario where he was raised.  Well educated for his time, Ferguson earned a degree in French and English at the University of Western Ontario in 1946 with the objective of a teaching career. This imbedded notion and inclination to teach might have underpinned his later radio days when he promoted the classics through parody and introduced new audiences to folk and traditional music from around the world from his privileged platform at CBC.
Perhaps more than many other Leacock medal winners, Ferguson and his work echoed the
changing times and the evolution of Canadian culture.  He rubbed shoulders and broke bread with the era’s icons like Lorne Greene, Christopher Plummer, and other CBC fixtures, and he was conscious of grand political machinations around arts and information as manifested in the Gordon and Fowler Royal Commissions.

I am not sure if everyone would agree, but as I catalogue my Leacock collection from this perspective, I am filing Ferguson’s book regionally under Nova Scotia alongside the Salt-Box.  His Rawhide radio career came out of the region’s Hank Snow heritage encased in the rise of urban Halifax and the sophistication that comes with an abundance of universities and colleges per capita.  It was the blend that would demand a daily country music show, but appreciate an ironic twist.
There is a better reason to label him and his book as Nova Scotian.  Ferguson, who was, for years, also an interviewer, reporter, and TV host based in Halifax clearly loved the province, the ocean, and the people.  He showed it in his affectionate accounts of fishing tournaments, travels through the Annalpolis valley, and the Acadian personalities.
When his Toronto career circumstances gave him the option of living wherever he wanted, he and his family started packing for Nova Scotia that day.
Review of "And Now ... Here's Max"
Newer Post Older Post Home