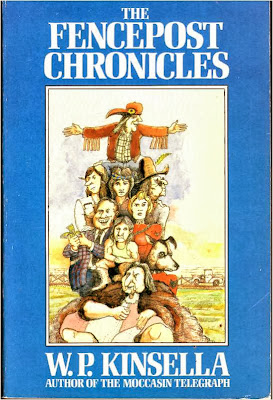 
I’m serious.
I’d like to learn how someone dares to do that, and when I had a chance to vicariously ask W.P. Kinsellaa question last year that’s the one I posed."
In November 2013, at his home in Yale, B.C., Kinsella met with a group of other Leacock Medal winners (four living, Terry Fallis, Joe Kertes, Dan Needles, and Trevor Cole, and one as cremated ashes, Paul Quarrington) along with the Leacock Museum curator Fred Addis. The group came to his home to spread a portion of Quarrington’s ashes, participate in an event at the local auditorium, and ask the Fencepost author a few questions, including a couple supplied by me.
On the first page of Kinsella’s 1987 Leacock Medal winner, The Fencepost Chronicles, the narrator says “None of them come right out and say us Indians was to blame for the riot.”On the next page, he describes a government agency’s related aboriginal strategy as being the assumption that “if they give all us Indians enough hockey sticks, basketballs and volleyballs, we forget out land claims, quit drinking too much, get good jobs so we can have the weekends off to play games.”


You immediately ask yourself “Is he really doing what I think he is?” - telling stories in an appropriated first-person- from the perspective of an invented aboriginal - drawing on stereotypes - and in a semi-literate style. Then - you read the whole hockey-riot story, look at those that follow, and realize that - “Yep, that’s pretty much it.”


But by that time, you are hooked on the humour, the characters and the style, and it’s too late to put the book aside.