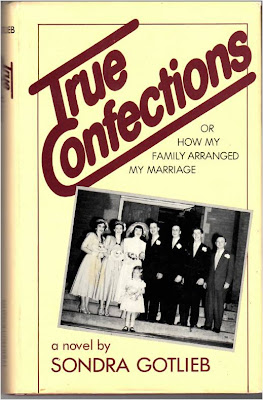 A creative writing course I took years ago still causes me unease when I think about assignments like “tastefully describe the torture to the death of a small child,” “detail the sights, sounds, and smells of your last trip to the bathroom,” and the daunting one that I could never bring myself to do: “assume the persona of a teenage girl.”


I probably dreaded the latter exercise so much because I feared resorting to clothes-food-and-boys clichés that would expose prejudice as well as writing competence.


But if I had to confront it today and if the assignment involved the personality of a slightly spoiled, somewhat innocent teenage Jewish girl inching toward adulthood in the North End of 1950s Winnipeg, I would have one model to clutch: True Confections, the 1979 Leacock Medal book by columnist and diplomat-spouse Sondra Gotlieb.


True Confections, subtitled “Or How My Family Arranged My Marriage,” was an autobiographical novel tracing the life of a girl from her “sweet sixteen party” to her marriage a couple of years later.  It talks a lot about clothes, food, and boys.


Teenage girls evidently think a lot about confections. Their preparation, consumption, and  impact on their bodies.  For the party that opens the book, the birthday girl insists on a long menu - a “layered sandwich loaf, iced with cream cheese and olives ...  sugared almond shortbreads ... Russian Butter Cake.”


Verna, the first-person narrator of the story, learns her mother’s recipes, takes a job in her cousin’s restaurant, and fusses as much about the caterers as the choice of a groom and intertwining of families at her wedding.


Always, food and clothing issues swirl around the story, it never strays far from the subject of boys.  Boys like the awkward Harvey Stone, who “is so smart that he thinks in parallelograms” and is from a well placed family.  Harvey would have Verna for sure, but she only sees him as slightly better than Saturday nights with her parents.  Another was Kenny “the milkman’s son.”  “Kenny’s brown eyes had a dreamy look ... His shoulders were broad and he was stronger than the boys whose fathers were doctors (and ... and) ... Kenny was interested in the mind.”  I gathered this was all good stuff for a teenage girl as the first half of the book devotes a lot of space to Verna’s imaginations around Kenny. This stops when the sensitive Kenny is spotted in the company of an older man and no female companions at the Opera.


Vera eventually falls into her “arranged” engagement to the South End Winnipeg, educated, and well travelled Martin Manheim - M.M.  The arranging did not mean dowries and match-makers, merely encouragement from attitudes that doomed unmarried, post-university women to the secular nunnery of graduate studies.

Attracted to marriage as an excuse to drop out, Verna did most of the arranging by allowing M.M.’s offhanded comment that his mother “thinks you might become her daughter-in-law” to evolve into a presumed proposal.  It seems to have worked out.  Verna’s story ends with reference to imperfect marriages but kind words about her own, which was then marking twenty-two years of “getting acquainted.”


I like the book, in part, because it celebrates Winnipeg, and the Leacock Medal experience would not be complete if the only portrayal of the prairies took the form of the small towns, wheat fields and big sky of W.O. Mitchell, Max Braithwaite, and their kind.  True Confections convinces you that some people living there – in wintery Winnipeg - might not want to ever leave and could even imagine it as the best place on earth.


This might be my greatest resulting insight about the mind of a teenage girl.  They live in places, have families, and have lives, and my sources within the gender tell me that though food, clothes, and boys are not to be ignored, these are just the ornaments on a personality.


The personality in this book is that of Sondra Gotlieb for sure,[i] but not the caricature of privileged social climber that haunts the real life Sondra.[ii]  In True Confections, as Vera and her teenage girl self, Gotlieb is candid, self-deprecating, and self aware.  So, one other thing I learned about young women is that they can be clever and funny.


Maybe, I should give that assignment another shot.
Maybe, I just did.

A Wordy Sketch of Sondra Gotlieb
[i] Sondra was married to Harvard-Berkley-Oxford schooled lawyer Allen Gotlieb, eventually the Canadian Ambassador to the United States.  She was also a cook book writer by the time this, her first novel, was written. Later she contributed to Maclean's and Chatelaine magazines before starting her well known columns in the Washington Post.  Over her career, she produced articles for Saturday Night, the New York Times, and The National Post.
[ii] Like the fictional Verna, Gotlieb was born in 1936 and married her older, scholarly husband in 1955.  They had three children Marc, Rachel, and first of all Rebecca, who was born just a few years after the marriage which was commemorated in the closing pages of the Leacock Medal book.   When True Confections was written, Sondra Gotlieb’s first child was just entering university and starting studies that would lead to several degrees and a career as a lawyer.  Sadly, Rebecca, who also wrote columns on occasion, passed away with cancer at only 44-years of age in 2003. The Gotliebs live in Toronto.