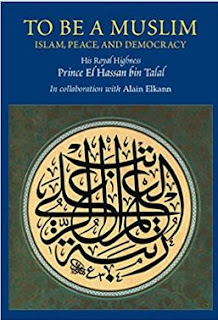 “Check out what the Prince reads.” Naz said.

“That will give you ideas.”

My colleague, a molecular biologist, did not recall ever reading humorous literature from his homeland and confessed that the weightiness of chemistry, biology, and physics texts consumed his youth. But he told me that “the Prince” – fully Prince El Hassan bin Talal of the Hashemite Kingdom of Jordan - a speed reader with diverse interests -  burns through a book every day and publishes his favourites on the web.

Heading to the Dead Sea in November 2017 for the World Science Forum, I wanted to study what made people smile in an Arab country: one encircled by Palestine, Syria, Iraq, and Saudi Arabia. 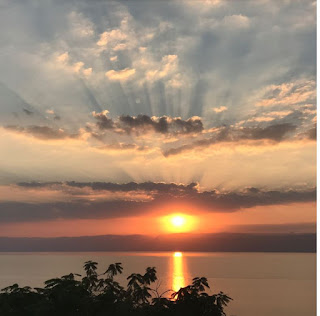 In my initial searches for “satire” in the Middle East, I found references to words like “interrogation," and learned that the Saudis had just marked their 100th execution of the year and recently imprisoned a young singer-actor for fooling around on stage and briefly “doing the dab” hip-hop dance.

Jordan, a relatively peaceful place, has a friendlier tone on the web, but still seemed light on humorists and humorous stories.  Knowing our hotel and the Convention Centre faced the Qumran hills and site of the Dead Sea Scrolls discovery, I looked for “humour” linked to “the Dead Sea” and the scrolls.  This turned up web stories about a “funny” guy who thought he was as smart as God and another character who thought God didn’t know what he was doing.  I guess that stuff could make you smile and reflect living in the Holy Land. 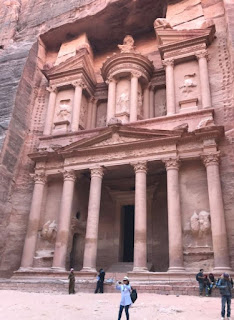 On this basis, I considered a humorous-literature side trip into Amman to see the Copper Scroll in the new national museum.  But it would stretch things a bit to tie this particular Dead Sea Scroll, a non-biblical list of locations and precious metals, to the study of literature, humorous or otherwise.

That’s why I turned to my friend Naz and the staff at the Embassy in Ottawa for suggestions of Jordanian humour to read.

The people at the Embassy gave me tourist brochures and smiles.

So I followed Naz’s suggestion.  Checking out the Prince, an intellectually vigorous, multi-lingual graduate of Oxford, one accepts lavish accounts of his erudition and easily finds lists of his favored reading materials.  But these books dealt exclusively with humorless thinking on economics, religion, and politics.

I started thinking about giving the Dead Sea Scrolls another look.

But the suggestion to “check out the Prince” assumed greater authority a week later, on the other side of the world (at the International Council for Science (ICSU) General Assemby in Taipei) where I met Professor Muhammad Saidam, Chief Scientist of Jordan’s Royal Scientific Society, during a coffee break.

I brought the conversation around to my humour hobby and had to smile when he too said that “chemistry, biology, and physics texts” had consumed his life and, again, that I should check out the Prince.  But as an environmental engineer who knew Prince Hassan personally and in a professional context, Professor Saidam had an explicit recommendation.

“Look at his writing on sanitation and water.” 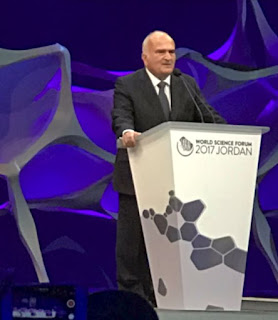 Prince El Hassan and the Jordanian Royal family as a whole bend toward public service, study, and the promotion of peace.  At seventy-years of age, His Royal Highness could fill pages with credentials in the cause of sustainable development, interfaith dialogue, and peace. He personally founded institutions ranging from the Royal Jordanian Polo Club to the Royal Scientific Society.

But Professor Saidam’s remark directed me to  the Prince’s role as Chairman of the UNSGABWS.

The Professor didn’t try pronouncing the acronym, rather he said “the UN Secretary General’s Advisory Board on Water and Sanitation.”

The Board has vital issues on its hands.  Over a quarter of the people on our plant without modern sanitation systems, and close to a billion cannot access clean water.  No wonder water and sanitation lie at the heart of the UN Millennium Development Goals.  They also interest Jordanians.

Spend an hour travelling around Jordan any time of the year, and the importance of water and water management will glare at you like the mid-day sun.  The country also has seen its population skyrocket and water resources strained with the influx of refugees from Syria and other conflicts zones tied to droughts and the ensuing mass migration.

In this context, the Prince’s interest in water and sanitation might not be too surprising, and his public comments and speeches make it a clear priority.

But you might be surprised to know the extent to which he advances his interests through - toilet humour.

He has given his name to editorial and other thought pieces that begin with jokes and riddles like “Why did the toilet paper roll down the hill?  To get to the bottom” and include bad puns like “bum deal” and “flash in the pan” when introducing arguments around sanitation standards.

Reportedly when first being briefed on his new UNSGABWS role, the Prince had a hard time stifling the giggles because so many water conferences, water congresses, and water councils had W.C. imbedded in their acronyms. 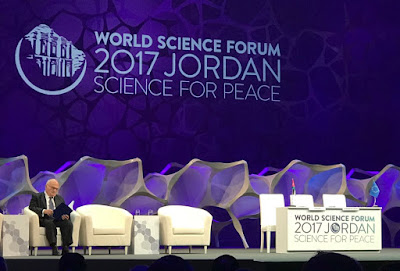 In reading the full text of his articles and speeches, you realize that Prince Hassan jokes purposely and with consideration.  Clearly recognizing the inevitability of nervous laughter when talking toilets and poop, he has decided to get it out of the way by making the jokes himself before his reading and listening audiences do so with their own distracting thoughts.

I think it works.  Even though toilet-linked riddles and puns seem silly, they intrigue in this context, lead you into reading more, and ultimately teach.

In one article Prince Hassan co-authored to mark the UN’s first "World Toilet Day" in 2013, “deadly serious facts” follow the funny intro to remind snickering readers that 10 million viruses can be found in only one gram of human feces.

Not only do billions of people lack access to decent sanitation, over a billion humans must defecate in the open “in fields, on roadsides, on railway tracks.” The situation robs  people of their dignity, exposes young women to special risks, forces many young people to drop out of school, and leaves “2 billion tons of human feces, with a dizzying number of potential viruses, bacteria and worm eggs … lying around our planet ready to be trodden on, touched or ingested in water and food.”

This phenomenon lies beneath one of the planet’s deadliest killers - diarrhea.  This avoidable and unassuming disease takes the lives of almost two thousand – 2,000 ! - children every day.

Hard to laugh as you work your way through the Prince’s speeches and stats on water and sanitation, but also hard to deny the power of humour to engage and thus to make information memorable. 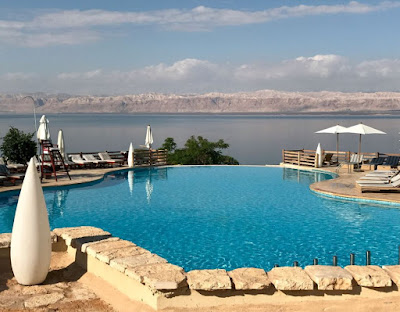 After reading these articles, I knew that my humour-student priority in Jordan would be to hear the Prince speak and to see if he employed his mix of humour and the deadly serious in other settings.

This seemed quite possible since the Prince, as founder of the Royal Scientific Society and father of the World Science Forum organizer, Princess Sumaya, had committed to speak at the Forum opening.  Despite a mix up with my credentials (requiring proof the “Richard” was also “Dick”), I managed to slip into the convention centre just in time to hear his keynote on the opening day.

The speech went on longer than scheduled and could be labelled a bit rambling by the unkind.  But I loved it.  It brimmed with passion, intellect, serious convictions, and, as I hoped, humour.

The Prince had me before he even began his speech.

As you can imagine, the poor soul charged with introducing the Royal keynote felt obliged to elucidate the long list of projects and causes led by his Highness over the last half century.  But before this man could finish the list, the Prince came up to podium and waved the introducer away while laughing.  Prince Hassan explained that long introductions distort the importance of a particular person, adding that none of the 3,000 of us in the room were really that important individually.

“Humanity is important,” he said, explaining that it is our shared and common welfare that is important.

In a similar way, he peppered his remarks on peace, sustainability, and human dignity with asides that made the audience smile and reflect.  For a taste of his thinking, check out the book To be a Muslim. 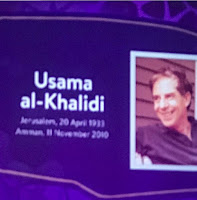 As for humour and humanity, the Prince touched me most with a tribute to his friend, the late Usama al-Khalidi, the Jerusalem-born, Arab biochemist who was being honoured in tandem with Sir Isaac Newton that day. 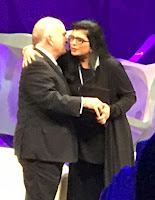 The Prince did go on at length.  I personally could have listened to him longer, but he cut into others' time - notably Irish science advisor Mark Ferguson, who got squeezed between Prince Hassan and the arrival of his nephew King Abdullah and had to finish his thought-provoking talk a few days later at the closing ceremonies.

Ferguson’s speech warranted the sequel.  He gave hope to the room with his country’s efforts to push violence into it past, how science had defeated disease, and how our minds, our souls, and our world could accommodate different points of view.

But I have to admit that the closing ceremonies delighted me most because I had another chance to hear my humour-and-serious-stuff hero, Prince Hassan.

There he sealed his status as someone I would love to meet someday with his on-stage affection for his daughter, his respect for the Jordanians responsible for the Forum’s success, his concern for all of humanity, and his indulgence in a few more splashes of that deadly serious humour.
Newer Post Older Post Home